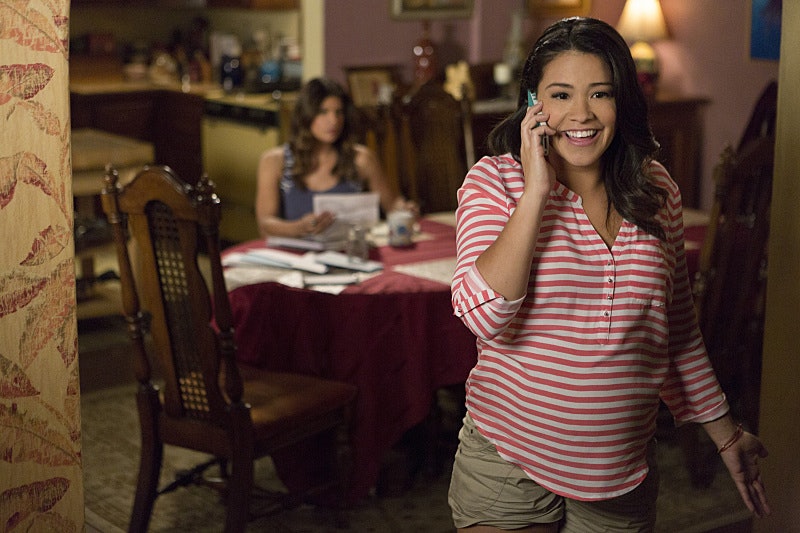 Every time I watch Jane the Virgin, I find myself appreciating how real and honest its heroine, Jane Villanueva, is. And after she suffered a big heartbreak during "Chapter 18," I realized that with all of this Team Rafael and Team Michael talk, every fan should really just be on Team Jane. The episode on April 13 showed Jane deciding to have faith in Rafael and their relationship, and ended with Rafael asking for a break after only a brief interaction with his long-lost mother. Jane would never make such a hurtful decision so quickly, and the fact that Rafael could do something like that makes me think he doesn't deserve her.

Now just because I'm Team Jane doesn't mean I don't appreciate the love triangle that Jane the Virgin has been brewing up. I want Jane to be with a man who makes her happy and has earned the right to be around her and all her awesomeness. (I started as Team Rafael, but I've been slowing moving toward Team Michael.) I'm also OK with her taking some time off from romance. But part of her knows that too, otherwise she wouldn't have made the right decision when Rafael proposed. (Sorry, dude. You may be dreamy, but it was way too soon.)

I honestly cheer for something that Jane says during every episode. Whether she's giving advice to her loved ones or getting help from others, Jane is a woman that every other woman can relate and learn from. So here are 10 reasons why I'm #TeamJane. (Rogelio would be so proud of my hashtag use.)

She Is Devoted To Her Family

The women of the Villanueva family are all fabulous in their own ways — each being a feminist, even if they don't realize it. Her grandmother Alba gave Jane faith, understanding, and kindness. Her mother Xo gave her strength to stand up for herself and do what makes her happy. Their conversations on the porch swing are always heartfelt and they all help each other when it comes to making hard decisions. That doesn't mean they aren't above arguing and holding grudges, but most people would be #blessed to be an honorary member of the Villanueva family.

Perhaps one of Jane's greatest strengths and biggest flaws is the amount that she overthinks things. It's rare on TV to see characters regularly struggle with making decisions and then fully understand why they choose to do what they do. But we see Jane constantly analyzing — whether she's talking it out with her mom and grandma or imagining some crazy/elaborate/hilarious scenario in her head. And whatever course of action she decides upon, I know that she gave it the time and attention (perhaps too much) that it deserved. As a fellow over-thinker, this trait of her's makes Jane even more relatable — and lovable — to me.

She Makes Tough Decisions About Her Relationships

Her analyzing also extends to her choices in her love life, like when she broke up with her fiancé Michael. It was one of Jane's quicker decisions, but Jane said she did it because she was falling in love with Rafael. She knew it wasn't fair to keep stringing Michael along if her heart belonged to someone else. (But can she please tell Michael about his ex-girlfriend Andie shadily befriending her... please?) And she wasn't afraid to say no to Rafael's very public proposal (as previously mentioned). No matter what happens next, I know she will end up doing what's best for her.

She Isn't Afraid To Be Emotional

Jane has every right to be emotional at this point in her life with so much drama surrounding her — and she doesn't actually feel the need to defend her actions (which she shouldn't). I mean, Rafael's sister impregnated her when she was a virgin and although she contemplated suing her, she's still been crazy classy about it. (Luisa probably would have a black eye or something if I were in Jane's shoes.) But Jane laughs and cries, gets angry and forgives. She's a woman with a very intelligent head on her shoulders, but that doesn't mean that she is invincible — and she doesn't try to be.

She Owns Up To Her Responsibilities & Doesn't Make Up Stories

Most hyper-dramatic TV shows have me screaming at the television when characters decide to tell a lie instead of the truth (normally because they don't want to hurt someone's feelings or get in trouble). Jane, bless her, never does that. She knew it would be hard to tell Rafael that she was responsible for pissing off the city commissioner and thus, messing with the Marbella's liquor license, but she told him the truth. And then made it right (by staying up all night to Google topics that ladies who lunch would enjoy). That's just the kind of person she is.

But She's Not Above Fibbing To Make Things Right

Growing up with two strong women, Jane was (and still is) often in the middle of fights between Xo and Alba. She knows they are both too proud to admit when they're wrong, so she would gently prompt them into moving on by faking apology letters from Xo to Alba. Yeah, it's a bit of trickery, but it allowed the two most important women in her life to forgive one another.

Besides her faux apology notes, the latin lover narrator has made it clear that Jane really is a good writer. She wrote Rogelio's touching farewell scene on The Passions of Santos and she's open to working on her craft by attending romance writer's workshops. What makes her (and her skills) even more appealing is the fact that she's such a fangirl when it comes to loving the romance writers who have inspired her.

At the beginning of the show, Jane was a student and a waitress at the Marbella. By "Chapter 11," she tried her hand at writing for a telenovela while student teaching and still waitressing... and let's not forget that she was pregnant through accidental artificial insemination the whole time. Of course, her abundance of work could have been due to her hesitation to make a decision, but when you're given multiple great opportunities, you want to be cautious. All I'm saying is, girl deserves a break.

Remember her dance of joy when she found out she was going to meet her favorite author Angelique Harper? How freakin' cute was that? Whenever Jane the Virgin shows how smitten Rafael and Michael are with Jane, I totally get it. She's funny, smart, silly, and unafraid of being herself. But all of that adds up to much more than being deserving of a man's love...

She's The Realistic Role Model We All Need

I think Jane would be shocked to find out that she's a role model, but that's what makes her such an excellent one. With all of the craziness that has been introduced into her perfectly planned life, she has taken it in stride (all while still being pretty type A about it). She may be judgmental, but she has a big heart. She may make sacrifices for the ones she loves, but she is always true to herself. All of these contradictions make her such a real, fully-formed character. Even with the emotional roller coaster she has been on, Jane acts in the way that I would hope I would be capable of in her situation. The fact that I wish I was more like her has officially solidified that I am 100 percent #TeamJane.