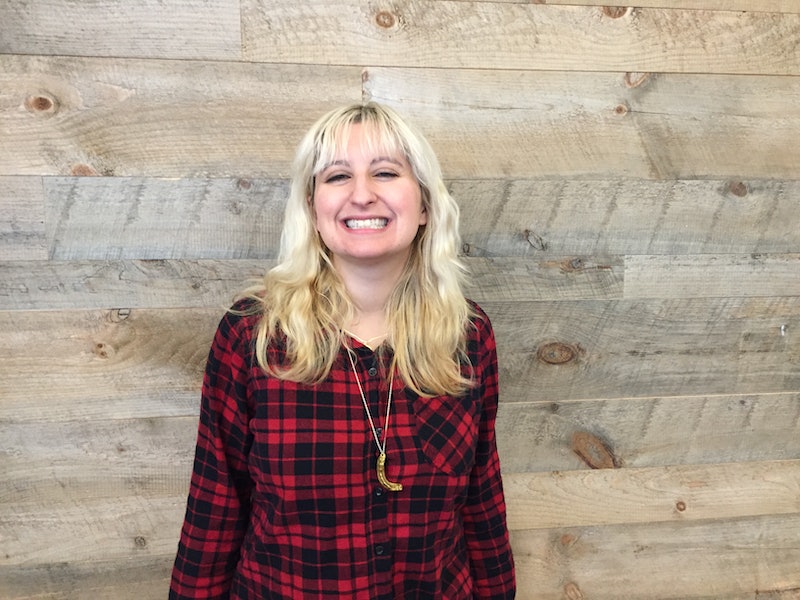 I am not a bad person, I swear — I give to charity, I hold the door, I valiantly fight my near-constant homicidal urges towards every other human being on the checkout line at Whole Foods — but you could be forgiven for maybe not noticing, because I don't smile a lot. OK, like, ever.

I, like my patron saints Aubrey Plaza and Daria Morgendorffer, am afflicted with a fairly hardy case of Resting Bitch Face. If we ever get seated next to each other at a dinner party and you notice me grimacing through our small talk about the bruschetta, know it's not you. If there isn't anything particularly happy-making going on in my vicinity, my face is a mask of serenity or bitchiness, depending on who you ask. Hey, if not smiling is good enough for Kanye, isn't it good enough for me?

And in the decade I've lived in New York City, my urge towards a poker face has gained a political dimension. Any woman who's run the big city gauntlet of catcalling knows, "Hey honey, why don't you smile?" can feel even more infuriating than the explicit stuff, even. In this kind of atmosphere, running around looking like you're on your way to a tax audit kinda feels like a feminist rebellion.

But recently, while desperately googling for the solutions to my emotionally-deadening depression and anxiety (as one does), I stumbled across an article outlining the idea that smiling can make you feel happier. In 2009, researchers at the University of Cardiff studied a group of women who had temporarily lost the ability to frown; they reported that smiling all the time made them just feel happier in general. And a 2012 study, where subjects had their facial muscles manipulated into smiles by scientists while they performed stressful tasks, found that subjects recovered from the stress more quickly that those whose faces remained impassive.

I thought about it. Perhaps smiling constantly could help me too. I didn't expect to actually become happy — but I thought I could at least convince my anxiety that I would no longer be its host body, and maybe go back to feeling nothing.

But there was still one small issue: I didn't really know how to smile on command. For reference, here I am, happily enjoying a delicious cup of coffee:

Now, here I am, seconds later, writhing in emotional agony because I feel like I look like I was just released from the asylum:

Clearly, I needed assistance. Luckily, Bustle retains an on-call smile specialist: Associate Web Culture Editor Emma Lord. Emma is smart, funny, and savvy, yet smiles more than anyone I have ever seen who does not also wear an ankle-length skirt and live on what could be described as a "compound." So I thought she might have some insight.

"Sounds perfect!!." said Emma. "I WILL TURN YOU INTO ZOOEY DESCHANEL FOR A DAY." It...did not entirely work.

But was Zooey Deschanel built in a day? No way. Zooey Deschanel had to work her way up from being in Jimmy Fallon music videos before she became America's sweetheart. And so would I.

The Experiment: One week of smiling, everywhere — and at any stranger — I could. Here's what happened.

Smiling On The Street

My first spot to grin at strangers was, of course, the infamously friendly streets of Manhattan! I spent three half-hour long expeditions walking the streets, trying to make eye contact and smile at any strangers who crossed my path.

How It Went: Here is a lengthy, but by no means comprehensive, list of the people who refused my smile and eye contact:

-about 15 women my own age or slightly older

-a police officer on a horse

Here is a complete list of all the people who responded to my smile and eye contact:

-a guy my own age, who smiled back because he thought I was flirting at him

-another guy my own age, who thought I was laughing at him, and gritted his teeth at me

-an elderly man on a smoke break

How I Felt: On one hand, I realized that everyone's reticence to return my grin (or even my gaze) made sense — what the hell was I smiling about? In New York, when a strangers smiles at you, it generally means that they either want to bone you, mug you, or tell you about a really cool cult that they belong to. Why risk finding out which one I was interested in?

But I still took it personally. All my life, people had urged me to be more cheerful, to lighten up, to smile, baby. As a morose kid, I had been promised that smiling would make people like me more, which would make me like myself more. But now that I was smiling — from a place of confused desperation, sure, but still, smiling! — no one was interested.

Smiling On My Commute

I went back to Emma, shaken from my rejections, and asked her if walking around smiling made her feel vulnerable. "No," she said, "it actually makes me feel less vulnerable." Smiling was her armor, the way she put distance between herself and the bad, hard parts of the world.

I thought about this. Grimacing had always been my armor, but it had always proven itself fairly penetrable when really bad stuff rolled around. Could I switch teams? I decided to try on the way home from work.

How It Went: I got on my train that evening blank-faced, but ready to fire a grin off as soon as a situation appropriate for one seemed to present itself. But ... one never seemed to present itself. Most people were buried in their phones. So I just decided to smile at whoever looked at me. I made eye contact and smiled at the few people who had forgotten to bring phones. Their blank stares back seemed to say, "On this commute alone, I have narrowly avoided falling into a pile of garbage and having a rat 'make love' to my foot. What on earth are you grinning at, dunderhead?" I wanted my smile to say, "I know! Me too! I know this is horrible! I am sorry! I thought we could commiserate!"

How I Felt: Smiles only say what you want when you're in control of them. I was not in control of my smile, and had no idea what it was saying. "Help," maybe.

Smiling At The Gym

I hear that there are gyms where people look good and try to have sex with each other. They probably smile at those gyms, too. I do not belong to one of those gyms. I belong to a YMCA where every single person is there because their doctor told them that if they didn't start doing more cardio, they were going to die.

How It Went: Everyone's head was down the entire hour I was there. I periodically tried smiling vacantly into space, which yielded no real results.How I Felt: On my walk home, alone on the desolate streets near my house in the dark, I tried smiling to myself, widely, as I walked. It felt good, warm in a way that I hadn't expected. For a moment, my anxiety was gone.

Smiling At The Store

I was more than halfway through my experiment, and had experienced such lackluster results that I take my smile to the store. This isn't really fair, right? People in stores are paid to smile at you.

How It Went: I went to a shoe store, and plastered on a big grin at the check out. His face remained impassive. I smiled at the woman stocking shelves behind him. She looked startled for a moment, then smiled back like I was a manager who had caught her slacking off.

I was walking down Fifth Avenue afterwards, vacantly smiling, which had become a habit that I wasn't even conscious of now, like picking at a hangnail. I had stopped expecting anyone to notice or care, and at this point, was just trying to finish out the week, so I could write my article, and go back to having resting bitch face.

I walked into a convenience store to buy myself a seltzer. A woman rang up my drink. "Do you have a rewards card?" she asked. "Um, which store am I in again?" I said. She laughed, and smiled at me. I laughed and smiled at her. And then I started crying.

Not sobbing or anything; just the kind of thing where tears fall out of your face, like you spilled a glass of water. The woman ringing me up looked in my eyes, really this time. Suddenly, I was feeling everything. My skin throbbed with emotions, all of them, stuff I hadn't felt in months — sadness, pain, the weird beauty of the inside of a CVS. I cried harder.

"Hey, it's OK," said the cashier, gently. She smiled at me. I smiled back. She handed me my seltzer and said, "It's all gonna be OK." I smiled at her, again — not even because I wanted to, just because it was happening. "I know," I said.

How I Felt: I felt agony, comfort, and relief. Was the success or failure of this experiment not faking it till I felt happy, but faking it till I felt anything? I felt cracked open, like I was slightly outside my body. I felt raw, which was not entirely disagreeable. I took my seltzer, coughing my tears. "I know."

Is that what you call a Zooey Deschanel breakthrough?

My Conclusion: As I type this, I am back to happily grimacing into my morning coffee, of course. I know who I am, and I'm never going to be a smiler. But even though I've immediately gone back to my old ways, I'm reluctant to call the experiment a success or a failure. I mean, putting on a happier face certainly didn't help me feel any happier — it made me feel like garbage at first, and eventually it made me engage in some deep emotional purging in front of a crowd of confused convenience store strangers who were just trying to buy gum and condoms, like normal people.

But pushing myself so far outside my emotional comfort zone — to essentially live my worst introvert nightmare — forced me to be vulnerable in a way that most of us, smilers and RBFers alike, will do anything to avoid. And it ended up helping me in a way that all the hot yoga and valerian root in the world couldn't. I realized that people weren't not smiling back because I'm a human gargoyle — people weren't smiling back because we're all afraid to be vulnerable, all deeply invested in the walls we've built around us, whether they're made of smiles or frowns or Insane Clown Posse t-shirts. We're all afraid of what will happen if we let anyone in.

But it's not that bad, I swear. If we drop our guards to the outside world for a second, maybe we can actually find a better way into our own hearts.

Ugh, that totally sounds like something a smiler would say, right?