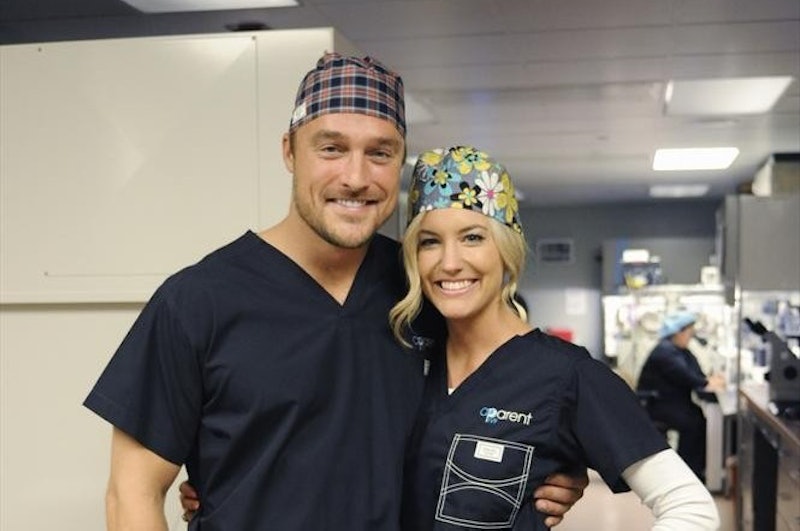 Now that the Bachelor is engaged, it's time to talk about the logical next step: When are Chris Soules and Whitney Bischoff going to have a baby? OK, a wedding would probably be the actual next step, but Bachelor Nation always needs more adorable babies. So, I've taken it upon myself to figure out what Chris Soules and Whitney Bischoff's children would look like. Thanks to some (not very sophisticated) face morphing websites, we can get a sneak peek at what the little Soules kids might look like.

We don't know when the latest Bachelor couple will procreate, but both of them do want to start a family. Bischoff revealed that she's frozen her eggs just in case, because the pair is taking things slow. "[We] definitely [want kids], so one step at a time: [Dancing With the Stars], the move to Iowa, the wedding, and eventually a family," Bischoff told Us Weekly.

But I can't wait that long, so I used the couple's official Bachelor portraits to judge what their future babies will look like. Obviously, this is probably not true to life. Soules and Bischoff are very attractive people and these babies are, well, interesting looking. But I did sample three different baby making websites to try to bring a variety of baby options. Enjoy!

I think my favorite part about their fictional son is that he's wearing a duck costume. Already showing his farming pride!

Little Whitney Jr. inherited her father's prominent forehead. But at least she got her mother's lovely hair!

Chris Jr. Via Make Me Babies

Are we sure this isn't just actually Chris Soules' baby photo?

Whitney Jr. Via Make Me Babies

Pretty sure this website only has one face that they put on both genders of babies. But it was a free site, so what're you gonna do?

Even these kooky websites show that Chris and Whitney are going to have attractive children. And that's saying a lot, because these baby generators do not always make the prettiest kids. I know we have to wait for Chris and Whitney to get married first, but I can't wait for when they'll start having children. There's no denying they'll be adorable.