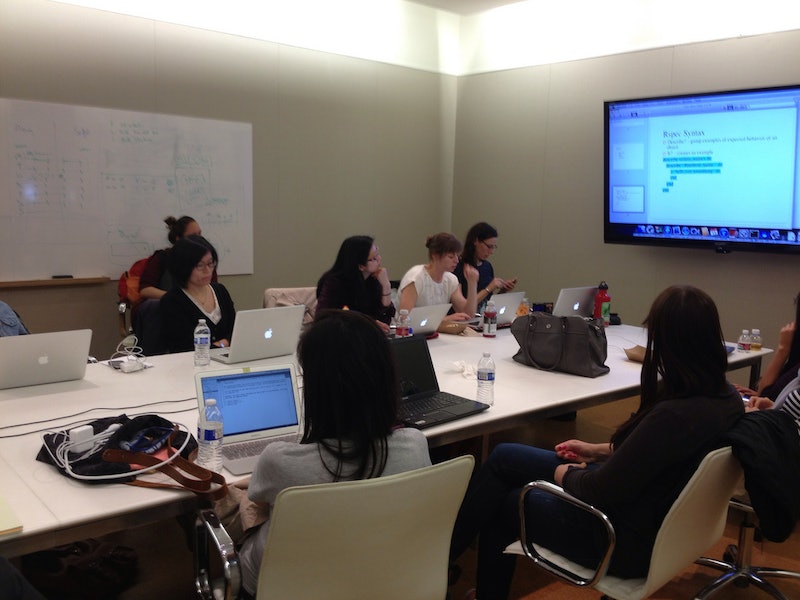 Cases like Ellen Pao's gender discrimination lawsuit make it clear not only that sexism is alive and kicking in Silicon Valley, but also that "leaning in" is getting us nowhere. Sick and tired of the expectation that women adapt to work environments that aren't adapting to them, the anonymous author of the website tableflip.club is advocating that women "flip the table" instead and quit jobs that aren't giving them the time of day.

It's an ethos similar to that of arguments against telling women to avoid alcohol or monitor their facial expressions to prevent sexual assault: "It’s not us, it’s you," the manifesto on tableflip.club reads. So why are we the ones trying to fix it? Why, once again, are women held responsible for practices that they are merely victims of?

Well, the author of the website and @tableflipclub Twitter account, along with the women she says have quit their jobs in response to her call to action, aren't having it:

We’re following in the footsteps of brave women who’ve flipped tables out of our way, clearing the path we’re now walking down. We’re talking. We’re organizing. We’re sharing our long memories of all the creeps who’ve hit on us and the cowards who’ve failed to promote us. We’re lawyering up. We’re incorporating and fundraising for our own companies, and angel investing in other women who are building amazing things. We’re ceasing to give any more fucks about your incompetently-run “Uber for cats” app or whatever the fuck your company does.

Jess Zimmerman sums it up at The Guardian : "You can’t destroy the master’s house, it seems, when the master’s a tool."

Based on the movement's Twitter responses, different parts of the manifesto are speaking to different women with different professional histories, including those outside the tech industry.

As a former Silicon Valley tech employee, I can attest to this problem of men at networking events who, let's say, may be looking to get to know more than just the Hadoop ecosystem. And because I was in marketing, this point on tableflip.club's website particularly resonated with me:

We’ve watched mediocre men whiz by us on a glass escalator, including in the part of tech companies which include a disproportionate number of women — roles that get dismissed as "pink collar" such as marketing, HR, and QA."

I didn't make the switch from pink-collar tech worker to Bustle writer with the Tableflip Club's philosophy in mind, but it sure is a perk to never again have to explain to a wide-eyed stranger what it's like to work alongside software engineers automatically branded "geniuses." I don't say this to bash my coworkers, but outsiders' assumption that the (mostly male) engineers were smarter than me ... well, you can see how problematic that might be.

But the Tableflip Club's call to action — "it’s time we take our potential elsewhere" — begs the question, where exactly? And how? What about the women who can't up and flip the table because they're just trying to put dinner on it? Perhaps the Tableflip Club can grow from an online forum to a structured organization that helps women start their own businesses and get hired at these women-run companies. Because, as these women know, they don't need men and their "Uber-for-cats" apps to kick ass in Silicon Valley.