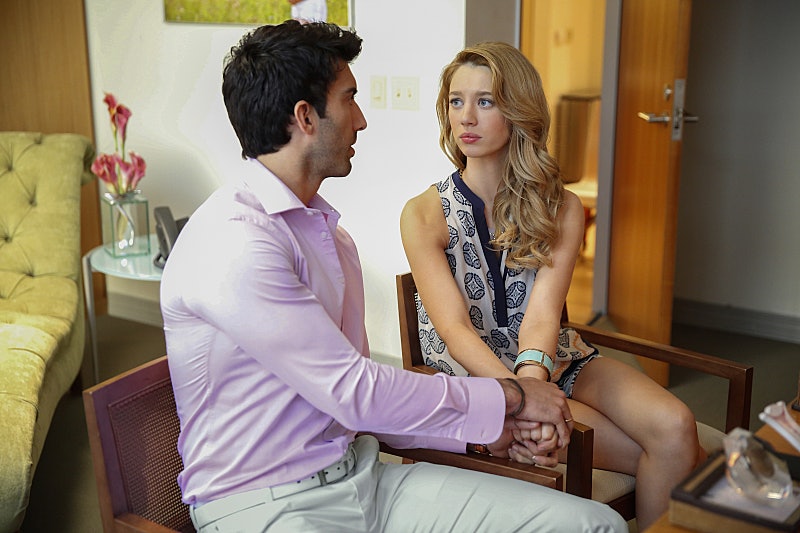 Oh, how my heart hurt for the Villanueva women after watching Jane the Virgin's "Chapter 19." But there was another character that I was surprised to find myself feeling sorry for — Petra, who was held hostage by Roman Zazo in the Everglades. Petra had previously discovered that Aaron Zazo was actually his evil twin brother (and her ex-lover) Roman Zazo. Fortunately, she had alerted Detective Michael Cordero (you know, Jane's ex) to her discovery, but unfortunately, Roman figured out that she knew and fled with her from the Marbella. While Jane was dealing with emotional anguish, poor Petra was being held captive by the man she used to sleep with — with not much hope of escaping. (Hey, I've seen Dexter. I know how easy it is to murder people in the great state of Fla.)

But one should never doubt the abilities of Petra. After Roman admitted to killing his twin brother Aaron and ranted about his plans to mess with Sin Rostro's drug trade, Petra seduced him. While he slept, she was able to secure his phone and called 911 for help. Michael and Nadine (Nadine!! The poor woman was under Sin Rostro's control this whole time) got the message and headed to save her. But Roman caught Petra calling the police and she had to flee — after she gave him a swift kick to the groin, a move that I always hope I'm capable of making in a high-stress situation.

As she hid from him in the Everglades, she got a hold of a spear and when he snuck up behind her, she accidentally impaled him . . . just like how his brother died. (Except it was with a spear this time, and not an ice sculpture of a marlin.) Michael arrived moments later and took her home, but Petra was rattled and after Rafael blew off her call, she reached out to someone possibly more evil than Roman — her mother.

Although I disagree with a lot of Petra's moves, I do have a newfound respect for her based on how she handled the situation with Roman. It was a horrifying experience and though I don't think she intentionally killed Roman, she used all her manipulation tactics and tricks that we've seen her implement at the hotel to save herself — and get rid of the bad guy. And if you're not going to use your powers for good sometimes, what's the point?