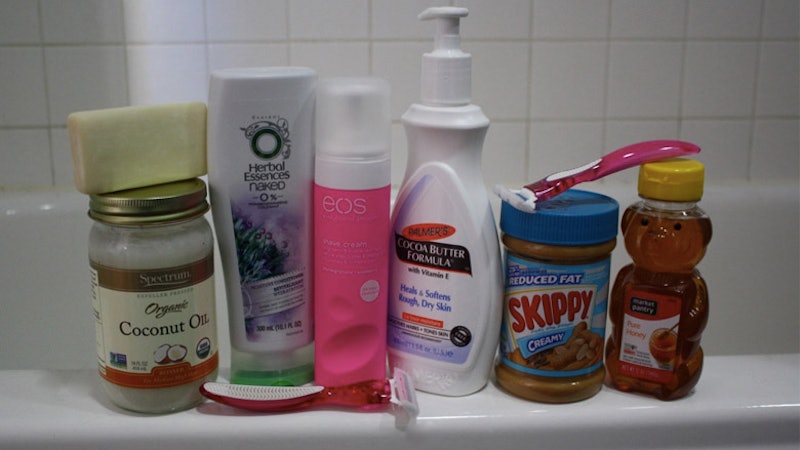 I'm of the school of thought that shaving your legs and armpits and whatever else should be done as infrequently as possible, and a major reason I hate shaving so much is because I never have the right shaving cream alternatives around. (Of course, part of it is because I hate how long it takes to actually shave my legs. Part of it is because I don't like the societal pressure to be perpetually hairless.) If I do have a razor in my cabinet, it's probably one that's relatively old, which is a common shaving mistake that can lead to irritation. If I have remembered to get fresh razors at the pharmacy, I'll usually come back home to find that I don't have shaving cream, at which point I grasp around in the shower looking for a substitute, only to just give up on the whole ordeal and keep letting that body hair grow.

Okay, before you get all up in arms, crying, "I thought this was about alternatives to shaving cream," let me say that I like science and every good experiment needs a control. When I do remember to buy shaving cream, I prefer eos Ultra Moisturizing Shave Cream. I figured it would be the best place to start, because how can I rank everything else if I don't have a control? To perhaps nobody's surprise, using shaving cream to shave my legs was great. It smelled nice. It wasn't too messy. It was easy to see what parts of my leg I had already shaved. And after I was done, my legs felt silky and smooth. Shaving cream works great.

I usually have Dr. Bronner's Magic Lavender Castile Bar Soap in my shower, and have often thought of using it instead of shaving cream in a pinch but have been warned by friends and the Internet that it isn't protective enough. Now was the time to give it a shot. And, for once, the Internet was right. It took a while to get the soap to a thick lather, and as soon as I started shaving, I could feel the dryness. I didn't get razor burn, but the skin where I shaved with soap is in need of some hydration.

Herbal Essences Naked Moisture Conditioner is my go-to conditioner because it doesn't have parabens or dyes, which I've been told are bad for keeping hair healthy. It also has a really pleasant mint scent, so I was happy to slather it on my legs. The texture was slimier than shaving cream, and the conditioner would slip down my leg a little bit, but it created a nice thick protective coat that left my legs moisturized after shaving. Overall, not too bad, and the gross factor was minimal.

I expected shaving with Palmer's Cocoa Butter Formula with Vitamin E to be a total mess, but it was surprisingly nice. The trick is not to rub the lotion into your skin too much before shaving, because if you do, there's really nothing to protect your leg from the razor. But because the lotion is hydrating, there was no need to moisturize afterward or even worry about dry skin, and all of the hair was removed, which was good. The biggest issue was with razor longevity. After two swipes, the blades were noticeably duller. I think you might need a couple razors to get both legs.

Despite claims that coconut oil works for everything, I've been slow to jump on the wagon, but I figured now was as good a time as any to get on. I picked up a jar of Spectrum Naturals Organic Coconut Oil, and scooped out what I thought was a generous helping. As I rubbed it on my leg, the oil melted, leaving a greasy shine. I could feel the razor burn happening as I dragged the blades up my shin, and had to stop after two swipes because it was too uncomfortable. The place on my leg where I shaved with coconut oil was by far the driest and itchiest at the end of this experiment.

There's something about using food stuffs in beauty routines (or in sex, for that matter) that really makes me uncomfortable. Something about taking something from the kitchen to use in the bathroom feels unhygienic to me, which is a big reason I've never really loved DIY beauty products. But apparently honey does good things to your skin, so why not give it a shot as a shaving cream alternative.

All I did was take a bottle of honey and squeeze it onto my leg. The honey wouldn't spread across my leg easily, so I had to put on more, which really created a sticky mess. It was too thick and goopy to really get a grip on any leg hair, so even after a couple of passes with the razor, I could still feel some stragglers. My leg did feel super soft afterward, though, so I could be convinced to try out some honey in my skincare routine.

Application was, in a word, disgusting. It was so thick and difficult to spread that it would've taken the whole jar to coat just one of my legs. As I pulled the razor up my leg, I could see the peanut butter forming these weird globs, and after one swipe, the blades were coated, rendering the razor almost unusable for a second go-round.

I washed the razor thoroughly and tried again, only to be totally grossed out with how tacky the peanut butter was on my leg. I immediately hopped in the shower, furiously scrubbing at my leg to get the rest of the peanut butter off, which took a surprisingly long time and a lot of scrubbing. But what was also surprising was how soft my leg was. Like, really soft. Softer than even the honey or the body lotion had left my legs. Unlike the honey, there were no lingering hairs, either. The result was surprisingly good, even if the process was unsurprisingly disgusting.

By far the worst shaving cream alternative was the coconut oil, followed closely by the soap. Both of those left my legs irritated and dry. Honey didn't dry out my legs, but it would've taken forever to make any progress, and the stickiness was a total turn-off. The body lotion was surprisingly nice, as was the conditioner, so I would use either of those in a pinch; I would just make sure the body lotion is thick and moisturizing enough. I was most surprised by the peanut butter, which left my legs silky smooth.

But I cannot emphasize this enough: Do not shave your legs with peanut butter. It's not worth it. It's super messy and your bathroom will smell like peanut butter, which will make your roommates confused and then you'll have to explain that you spent the last 15 minutes rubbing peanut butter on your legs. There's a reason we have shaving cream. It's good at what it does. So although you can sub out shaving cream for conditioner or body lotion if you're desperate, I would strongly advise just sucking it up and buying shaving cream... Maybe in bulk.

More like this
Function Of Beauty Is Making Customised Haircare A Thing
By Justine Knight
PATTERN Beauty Has *Finally* Landed In The UK
By Justine Knight
You Can Fake Having Thick Hair & Great Skin With Any Of These Clever, Cheap Things Reviewers Swear By
By Claire Epting
Most Comfortable Underwear For Big Butts
By Audrey Williams
Get Even More From Bustle — Sign Up For The Newsletter