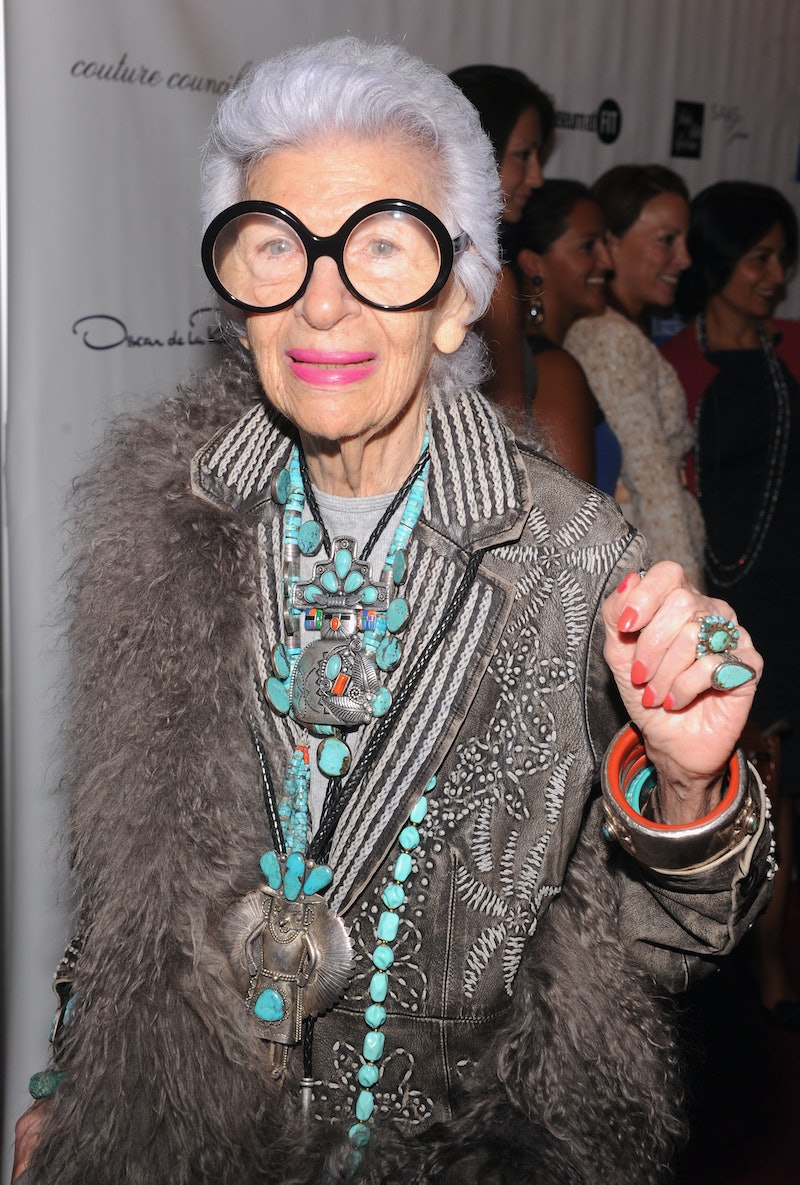 Iris Apfel is basically a living style legend, and on top of that, just a really cool lady. And even though, according to Style.com, Iris Apfel says she's not a feminist, I still love and respect her. I mean, seriously, anyone who candidly chats up Kanye West on camera deserves mad props. The interior-designer-turned-fashion-icon spoke with Style.com about her— in my opinion, less than stellar— view of feminism, issues with the current fashion industry, and that NBD documentary.

Apfel has always been a boundary pushing woman. In the interview, the icon reveals an anecdote where she convinced a man to sell her jeans in the 1940s despite his protestations that they weren't for women. Yet, despite her career-driven life and progressive thinking, the icon doesn't identify as a feminist. She tells Style.com, "God, no. I’m no feminist. I just lived that way. I never felt discriminated against because I was a woman, and the way I chose to live and the things I believe, I’ve never codified it. If feminists feel that way, too, then good for them." Her statement is perplexing in that Apfel admits to living her life as if she were a feminist, but like many other celebrities, she chooses not to identify as one. Apfel is certainly not the first to express this feeling, but it's problematic particularly because you don't need to have directly experienced gender inequality to support equal rights between men and women. Because, news flash, that's all feminism is, the belief in the equality between the sexes.

Despite her rather disappointing decision not to self identify as a feminism, Apfel is still undeniably chic, a quality that didn't go unnoticed by renowned film maker Albert Maysles. Apfel is the star of his last documentary. The film covers a wide swath of Apfel's life including her marriage, the launch of she and her husband's textile firm, and her constant dedication to fashion. So, it's no wonder that she and Style.com spent some time talking about the feature. At first, Apfel admits that she turned Maysels down! Eventually, however, the fashion genius came around with a little help from Linda Fargo— Yes, Bergdorf Goodman's Linda Fargo. Of the end result, Apfel states:

"I didn’t know what to expect, and so I wasn’t surprised. I saw the film for the first time when it played at the festival [New York Film Festival]. There were a few things I thought he left out and a few things he put in I didn’t think were so important. But Maysles loved it, and he went to his grave loving it, and that makes me very happy."

Outside of the fact that she's got her very own documentary, one of the most interesting things about Apfel is her unique sense of style and ability to find smart pieces in any environment. In the interview, Style.com brings up a very specific scene in which Apfel can be seen shopping and digging through what appears to be odds and ends. Of the scene, Apfel explains:

"Oh, that’s bread and wine to me. I’d rather go to a flea market than just about anything. It’s the process I like—the same with getting dressed. If I’ve got someplace to be, I’ll spend more time getting dressed than I spent at the actual event. Sometimes. Even in my own closet, I love to dig and search and find. And if I’m shopping…You know, if it’s a piece of fabric, I listen to the threads. It’s not intellectual at all. The price is nothing. It’s the emotional content: I have to feel it in my gut. I don’t know how to explain it other than that."

The Alexis Bittar campaign woman clearly understands that good fashion can be found anywhere, not just on a rack at Saks. The icon, however, does have a love for new designers. She names Ralph Rucci as one of her current favorites, but she does take issue with some aspects of the industry today saying, "The kids today, they’re instant-everything. No one apprentices. When I was growing up—the ’50s to the ’80s, the era of the great designers—everything felt new. Now it’s all retreads."

Despite Apfel's unfortunate commentary on feminism, the style icon is still a living legend with genius level chicness. From her brazen call out of the fashion industry to her love of chic finds, at 93, the superstar is still way cooler than I'll ever be.