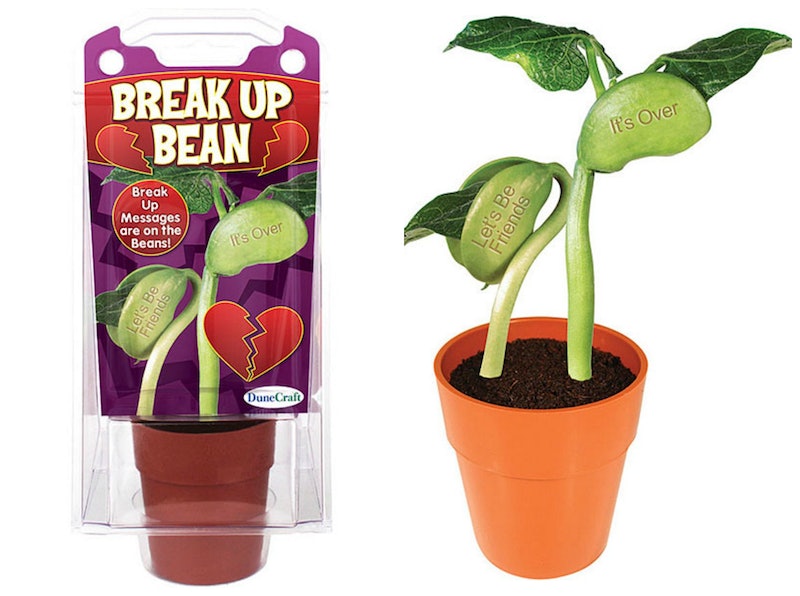 There are an awful lot of bad ways to end a relationship, but I never thought I'd ever see something this bad. It's called a Break Up Bean, and it's an actual plant that you grow which, when it sprouts, reveals a Lima bean with the words “Let's Be Friends” or “It's Over” on it. For real. This is a thing that actually exists. Given that its product description specifies that it's “safe for ages three and up,” I'm hoping it's meant as a joke… but I'm actually not so sure it is. And that? Is kind of depressing.

Created by DuneCraft and available at ThinkGeek (a site I usually love, although I do not love this), Break Up Bean kits come with everything you need to grow your own breakup-themed message bean. In addition to the Lima bean seeds, there's a sprouting pot, terrarium packaging, and some sort of “special germination mixture” that presumably helps this Bean of Doom accomplish its goal in the allotted five days. There's also a message bean for every occasion, though — including an “I'm Sorry” one, so if you decide you've made a huge mistake, you can always try to fix the problem with another one. Or something. They're only $4.99 on DuneCraft's website and $6.99 on ThinkGeek's, so do with that what you will.

Somewhat hilariously, Break Up Beans are apparently the one thing on which everyone on the Internet can agree: They're the worst way to break up with someone ever. Here is a small selection of the reactions most people are having:

Like many horrible ways of breaking up with a romantic partner, [the Break Up Bean] avoids talking to the person like a grown adult, opting for an impossibly immature manner of cluing them in to what's going on. In this case, the break-up message appears on the beans only once they grow, ensuring you don't have to be anywhere in the vicinity when the crying and the screaming and the inevitable breaking-every-fragile-object-in-sight ensues.

Yep. Spot on. Also, how exactly are you supposed to go about using a Break Up Bean to initiate a breakup? Do you start growing it surreptitiously and just leave it quietly on your former partner's kitchen table for them to find after you've had a chance to get far, far away? Do you grow it, wordlessly hand it to them, and leave? Or, worse yet, do you give them the kit minus all the packaging, have them grow the bean themselves, and then break the news to them as soon as it sprouts?

None of these options really seem like good ones. In fact, I'm pretty sure there are no good options when it comes to using a Break Up Bean. So maybe… don't use them? Just a thought.

And while we're on the subject, it's probably best not to break up with someone through any of these slightly bizarre products or methods, either. There are much better ways to end a relationship. Just sayin'.

I'm not talking about apps to help you cope with a breakup after it's already happened; those can be great tools to have on hand. No, I mean apps that actually do your breaking up for you. BreakupText, for example, is mostly tongue-in-cheek and meant as a joke… but I'm sure there are some people out there who have seriously thought about using it as a way to end a relationship. Don't do that unless you've actually been eaten a bear.

Seriously? You can't be bothered to man or woman up and end things yourself? This is even worse than getting a friend to do it for you, largely because it turns the whole thing into a business transaction. I'll admit that I'm not entirely sure whether iBreakUp.net is real or a joke… but a few years ago, iDUMP4U was apparently real, as is this guy.

That may be the case, but gifting someone with a memento of your breakup right when it happens will probably result in some unfortunate teddy bear mangling. Think of the poor bears, you guys. Their only crime is wearing the wrong T-shirt.

4. Personalized Giant Cookie Cake with a Break Up Message On It