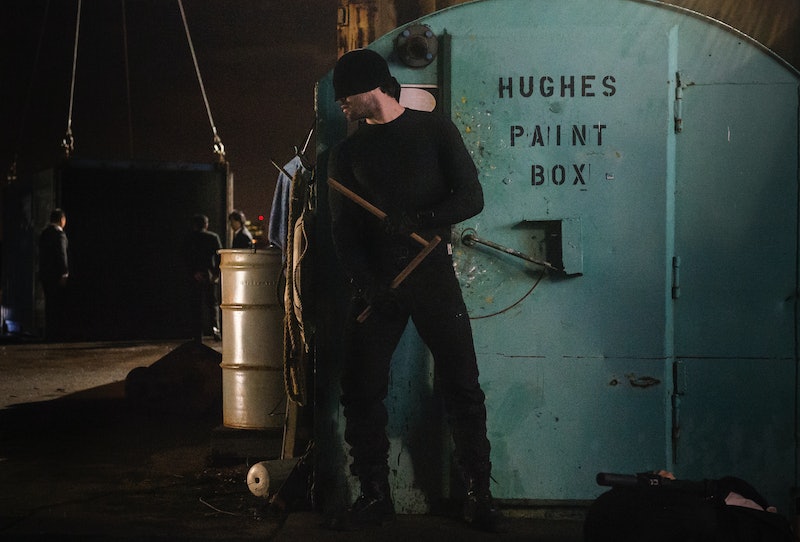 Though it premiered over nine months ago, Daredevil is still making me feel all of the feelings! On the one hand, I adore the show. The action, the fighting, the Charlie Cox not wearing shirts — it all works for me. On the other hand, I cannot stand unsolved mysteries, and the lingering question of what Black Sky is on Daredevil still gnaws at me. We already know that Black Sky is a weapon that was being transported from Japan to The United States (smack in the middle of Hell's Kitchen, naturally) by Nobu. The same Nobu who was not only in league with Fisk, but was also very likely a member of The Hand, a secret organization in Marvel Comics. This is the same organization that Elekra was part of in the comics and that is constantly at war with Stick's organization, The Chaste. You guys with me so far? Now, back to Black Sky, which appears to be a child who is extremely rare and has a crazy amount of power. It seems like this child is wanted by The Hand, and hunted by The Chaste.

There is clearly much more to this story then what we discovered in Daredevil Season 1, and I need more information to complete my conspiracy theory wall. Unfortunately, it sounds like we will have awhile to wait for more details. And by a while, I mean until March 18, when Season 2 hits Netflix.

See, I've been obsessively trying to hunt down more clues since the moment I finished my Daredevil marathon. Black Sky is nowhere to be found in Marvel Comics, there is no mention of it in the connected Marvel Cinematic Universe either, so I wouldn't expect it to be explained in another show or movie. (Don't worry, I'll be watching all of them and if I catch wind of a Black Sky hint I'll blow it out of the water.) That means we'll just have to wait until Daredevil Season 2 to get more information, but even that could take a while to develop. In an interview with SciFiNow, Season 1 showrunner Steven DeKnight revealed that he was in no rush to tell all Daredevil stories at once.

Looking forward, there are so many stories to tell ... The Hand, Elektra, Bullseye… with a 13-episode arc you don’t have to rush it; you can explore. That’s not to say we are going to do Bullseye and Elektra, but it’s on the radar.

This is a clear case of good news/bad news. The bright side is, DeKnight didn't mention The Hand when he spoke about what Daredevil might not cover next season (and I bet the organization is related to Black Sky), so it is likely to make an appearance. The downside is that emphasis is on slow-burn storytelling, which may mean that even after watching all of next season, we'll still have more questions than answers about Black Sky. And with no help from the comics or MCU, for now we'll have to be content with re-watching Season 1, looking for more hints in Season 2, and formulating theories until Daredevil finally returns.