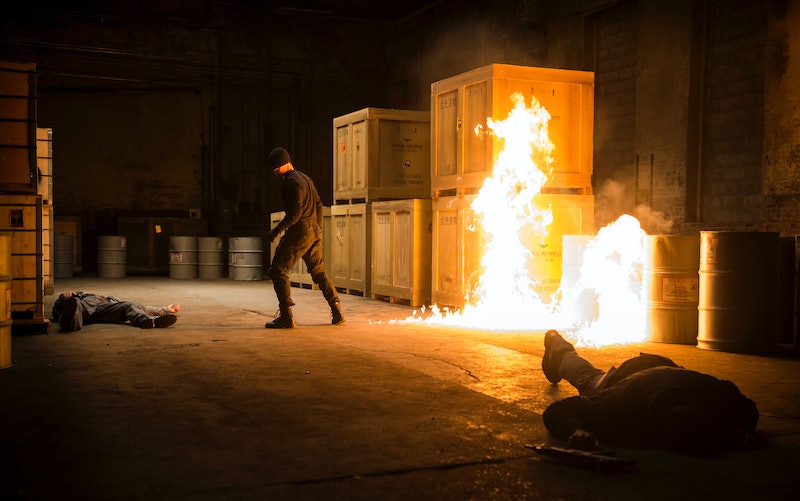 Netflix's new series Daredevil draws from a rich comic history, yet has still found a way to surprise its savviest fans. What is a Black Sky in the Marvel world of Daredevil? While the one we've seen is dead, there are purportedly more to be found in this universe. In the episode "Stick," a Black Sky is initially described as a weapon one wouldn't want in this world that is being transported by Fisk's collaborator Nobu from Japan to the United States. It is also known as the "bringer of shadows." However, Black Sky turned out to be a little kid and was quickly killed by Stick, another blind man who served as Daredevil's mentor in his early years. Stick wanted to keep this weapon off of the streets and asked for Matt Murdock's assistance as a solider. When Matt found out that his mission involved murder, he was not pleased. Update: Daredevil Season 2 revealed the identity of Black Sky.

Stick is the Ra's Al Ghul to Matt Murdock's Bruce Wayne (or the Ra's Al Ghul to his Oliver Queen, if you're an Arrow fan). He taught Matt how to fight, hone his senses and use them to his advantage. Then Stick took off for two decades because young Matt tried to give him a bracelet. I'm serious. That's why Daredevil is so angsty — he has not one but two absent father figures!

In the middle of the episode, the Black Sky was brought in on a crate at the docks. Murdock noted that his pulse sounded different, but couldn't define how. We saw that the boy was chained to the inside of the crate, with a large shackle around his neck and others on his hands and feet. Matt is appalled that Stick wanted him dead, and Stick insists that Black Sky was not just a child and if Matt was focused enough he could have sensed his true nature.

So, is a child really all there is to a Black Sky? Unfortunately, the phrase Black Sky is not in Marvel comics, so we're on our own to speculate what it means. Is this like Black Widow, who was trained by an organization that turned little girls into weapons? There isn't a huge history of dangerous children in Marvel comics, but that is one shining example.

Does a Black Sky have special powers? We've seen different kinds of powered people in this universe, not to mention the huge Inhuman reveal on Agents of S.H.I.E.L.D., which MTV theorizes could be the truth behind Black Sky. It is pretty suspicious that Stick doesn't seem to have aged all that much in the 20 years since he first met Murdock. He clearly has some secrets as well. Finally, Madame Gao appears to have some kind of super strength towards the end of the season, as fans at the Stack Exchange pointed out in conjunction to Black Sky speculation. Are they all Inhuman, or something even more mysterious?

After the boy is killed, Nobu tells Fisk that another Black Sky will be hard to find and that they are very rare. This is clearly something otherworldly, right? Then again, in the pilot, the writing on Nobu's maps of his plans for the city translate to "Black Sky." It's all so cryptic I can hardly stand it. After that, all mentions of Black Sky went out the window.

The takeaway here is that this is something Nobu wants, and we should pay more attention to what he represents. When we see Nobu fighting Daredevil in a later episode, he's dressed in red and heavily resembling a member of the The Hand, an organization in Marvel comics. Another infamous member of The Hand is Elektra, who the series only hinted at in its first season. The Hand is constantly at war with Stick's organization in the comics, the Chaste. So now we can understand why these two had issues with one another. However, it still doesn't explain what this kid really is. They also tie heavily into the backstory of Daniel Rand, the Iron Fist.

The Black Sky is also not the first or last dangerous child on this particular series. Matt Murdock was taught how to defend himself at a young age, and we learn in the episode "Shadows In The Glass" that Wilson Fisk was turned into a monster by his own father. This is definitely a theme, but something is different about Black Sky.

Whatever the answer is, Daredevil certainly has set up a lot for a potential second season or at least the other Marvel Cinematic Universe series on Netflix to come.