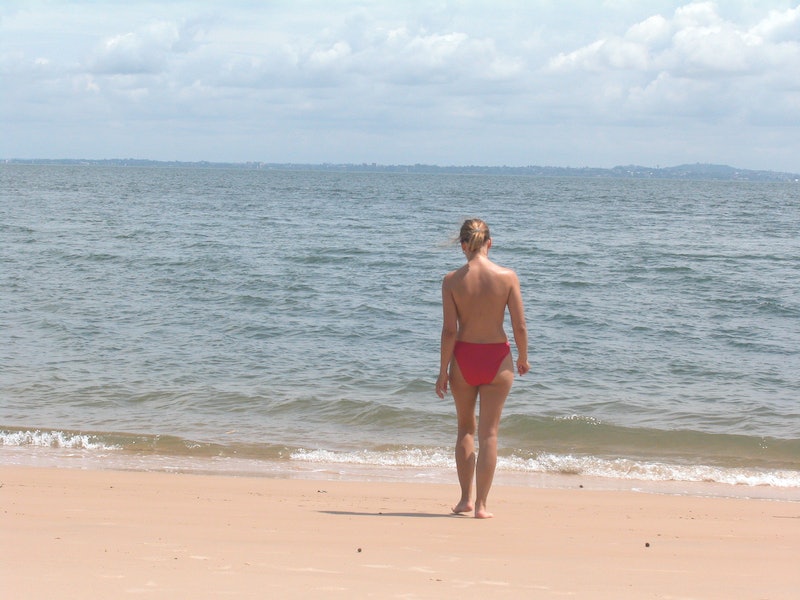 Earlier: If you want to ensure your glow doesn't come with annoying tan lines this year, then you might want to hit up a particular spot in California this summer. Venice Beach passed a motion to allow topless sunbathing on Tuesday, which means you might soon be able to soak up the sun's rays sans a bikini top there. The neighborhood council in Venice Beach put the issue up to a vote, and it passed by a landslide, with the council saying that its members "support women being afforded the same rights as men to sunbathe topless." However, the city and county of Los Angeles prohibit the display of female breasts in public, which could complicate how this measure is actually enacted. Melissa Diner, the council member who sponsored the bill, says they will be in talks with the L.A. mayor, city councilman, and Los Angeles County Board of Supervisors to get an exception for Venice Beach.

Although the issue of topless sunbathing might seem rather frivolous, Diner believes this is an issue of gender equality, since women are the only ones targeted by these laws. "I think this is a serious equality issue, and I'm not going to shy away from it," she told The L.A. Times.

Many other Venice Beach residents and councilmembers have opinions on the subject. Surf instructor Martin Squiresm, for example, says he supports a law to make topless sunbathing legal and that "it's time for America to grow up." Linda Lucks, president emeritus of the Venice Neighborhood Council, doesn't feel the same, as she thinks there is more important business to be done: "There are so many more important things to be concerned about in Venice ... I want us to be taken seriously, and this makes us look foolish." However, Mike Newhouse, the current president of the council believes that this would be more of a symbol than anything, but an important one: "It's more of a statement about equality and not so much a full-throated effort to make this happen come hell or high water."

The tide has begun to turn on the issue of female toplessness in recent years, with campaigns like #FreetheNipple making waves on social media and laws beginning to change around the U.S. For many, it's an issue of fairness, since men are permitted to walk around shirtless in a variety of settings, while women are shamed and even arrested for the same behavior.

If you want to get in on nipple equality, walk around topless, or just get a good tan without bikini lines, here's a list of five other places where you might not have known it's legal to be topless.

Being topless in public has been legal in New York state since 1992, on grounds of equal protection. Since many topless women have been wrongfully questioned, ticketed, or taken into police custody despite the law, cops were given a reminder in 2013 that they can't arrest a woman for simply being topless.

It's perfectly legal to walk around without a top in the Peach State. A woman was wrongfully arrested for being topless despite this law in August of 2013, though, so know your rights, ladies!

GoTopless.org cites this city as one of the places where toplessness is legal. However, they warn that even in top-free cities, you can still be arrested for disorderly conduct, so watch where you're walking.

If you're an Ontario native, you can freely walk around without a shirt. But there are some restrictions in place as to where and when you can be topless, so make sure to read the fine print.

You can walk around topless in Seattle ... sort of. There are no specific nudity laws on the books, but there are provisions around indecent exposure. A local police officer said that if the topless woman is causing alarm or a reaction, then it could be grounds for arrest. "A woman riding through a neighborhood topless is probably not going to cause that much alarm," he said. But doing this same thing at a neighborhood playground wouldn't be okay, he says. "Not only would it terrify the kids, it's what we would call a blatant violation of law," he told My Northwest.