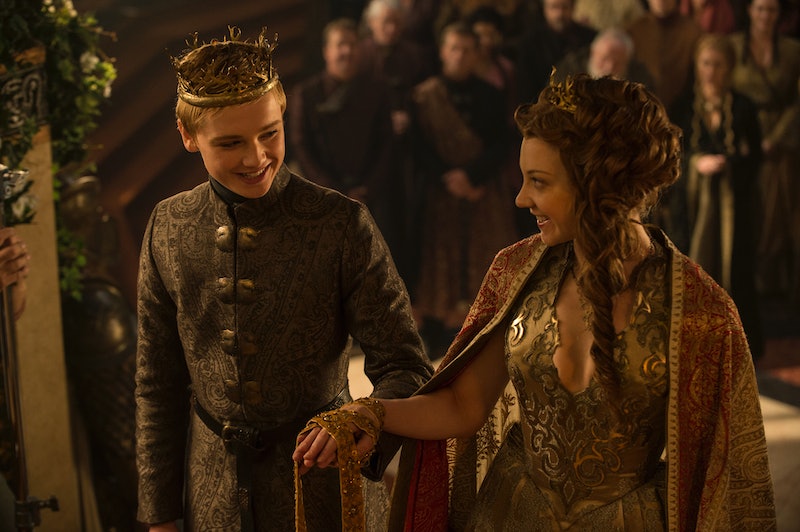 We haven't seen a lot of the new King of Westeros in this season of Game of Thrones so far. That's probably for the best, as that creepy prophecy told Cersei that all of her children would die as Kings and Queens, in so many words. Is Tommen going to die on Game of Thrones? For the sake of Ser Pounce, say it ain't so!

What happens in the A Song of Ice And Fire books? I have good news, fans of the littlest "Baratheon" boy. As far as George R. R. Martin is concerned, Tommen I is still alive and well and ruling over the seven kingdoms with Margaery Tyrell as his Queen. The books have actually shifted focus away from young Tommen for a while. He has taken somewhat of a backseat while Cersei's story plays out. Granted, at this point in the books he is only nine years old. His favorite activities include playing with kittens and putting his royal stamp on legal documents, which makes getting bills passed in King's Landing pretty simple. He does stand up to his mother eventually. Cersei takes out her anger on a poor whipping boy named Pate.

The HBO series is sure to give him more to do this season, especially with Natalie Dormer and the rising popularity of her character. Let's just hope that doesn't spell doom.

I'm not nuts about Cersei's small council of sycophants, as her uncle put it. It's not the most effective method of leadership. Still, that doesn't mean sweet Tommen should suffer. In the season premiere flashback, young Cersei accurately learned that she would become Queen and that she would have three children by someone other than the King. "Gold shall be their crowns and gold their shrouds," the prophet said.

Now, I personally believe that the "gold crowns" could just be referring to Joffrey, Tommen and Myrcella's blonde, very clearly inbred Lannister and not Baratheon hair. However, there's no misinterpreting what "shroud" means and both Joffrey and Tommen have been crowned King, so the prophecy is on track so far. Look out, Tommen! The books may have kept you alive, but fate is coming for you next.

If Cersei's prophecy is in fact right about Tommen, what else is it predicting? Could Myrcella Baratheon really become Queen of Westeros? I'm assuming that the HBO series' decision to include the prophecy (which didn't really tell us much that we didn't already know) means that the show will get into Westerosi succession laws this season. I know how succession works in the books, but since those spoilers don't immediately relate to Tommen's fate specifically, I'll keep my mouth shut. Besides, the show could take a totally different route.

However, here's why it matters — Myrcella is older than Tommen, but it appears that girls can't succeed that easily. If Tommen were to die, would the Iron Throne go to his sister or would it go straight to his Uncle Stannis Baratheon instead? That would actually be a little bit funny. Here Stannis is, off wasting resources and fighting wars to claim his rightful seat on the crown (Daenerys Targaryan excluded) when all he had to do was wait a few months for the younger Baratheons to die out.

I think Tommen is safe on Game of Thrones, at least for a while. It would be a little repetitive to kill two boy kings in a row, wouldn't it? Cersei's prophecy may speak to Tommen's eventual fate. However, half the fun of a prophecy in drama is seeing how other characters react to them and try to keep them from coming true. I think that's what we should be focusing on while watching this season of Game of Thrones.