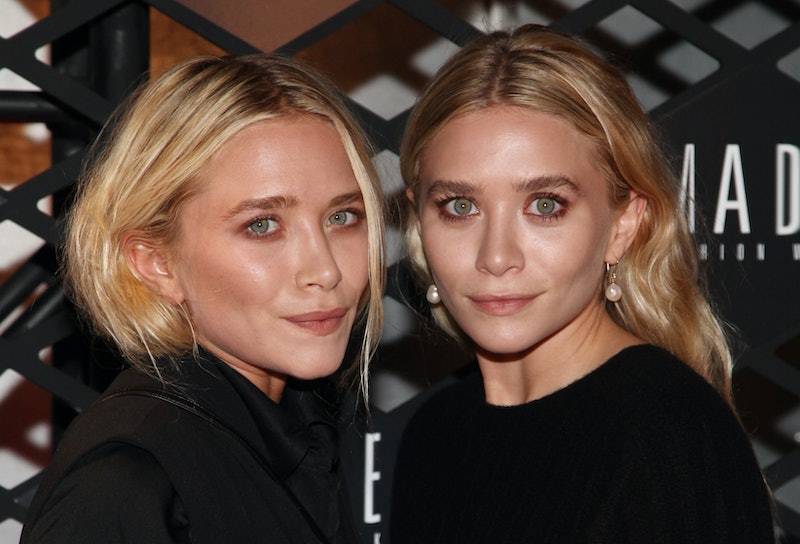 This week has been jammed packed with Mary-Kate and Ashley nostalgia. First, John Stamos confirmed that the Full House spinoff Fuller House would stream on Netflix in 2016, leaving everyone to speculate whether the infamous Olsen twins would reprise their shared role as Michelle Tanner. While we still don't know if the twins will return for the new series (they have to talk to TV dad Bob Saget to get his perspective first!) we now know that Mary-Kate and Ashley will be back on TV after all — in reruns, anyway. According to reports, Nickelodeon has acquired tons of Olsen twins films, which gives them the ability to air shows like kid detective series The Adventures Of Mary-Kate And Ashley, as well as the 2001 Fox sitcom So Little Time. But, as fun as the teen comedy was, it's not the only one Olsen twin TV show that we need back in our lives — to make this bout of nostalgia truly complete, we're gonna need ABC's Olsen twins-starring series from 1998, Two of A Kind .

For those of you who don't know what I'm talking about, Two Of A Kind is the sitcom that the Olsen twins starred on shortly after the end of Full House. The family sitcom revolved around two very different twin girls (also named Mary-Kate and Ashley) who live with their widowed father and their "hip" babysitter Carrie. In simplest terms, the show was a less crowded version of Full House, and I loved every second of its 22-episode run.

Here's why we need Two Of A Kind to return to the airwaves, ASAP:

They played the same exact character on Full House, and were pretty much interchangeable in the Adventures Of Mary-Kate And Ashley — but their differences were the point of this sitcom. Ashley was the girly-girl with a passion for fashion, while Mary-Kate was a tomboy who loved action flicks.

It's A Time Capsule For The Early '00s

Was there an episode where Mary-Kate and Ashley didn't have to dress up like one another as part of a scheme? Cannot recall.

His name is Kevin, and he's also a widower. Little less obsessed with cleaning, though.

The Hair Styles Were So On Point

So. Many. Butterfly clips.

The Show Had An Amazing OTP

Babysitter Carrie and professor Kevin were meant to be — if only the show lasted another season (or two!) to really make that happen.

The Show Had A Book Series Sequel

The TV show may have only lasted for a season, but the show got new life in a 40-book series of novels. Long live Two Of A Kind!