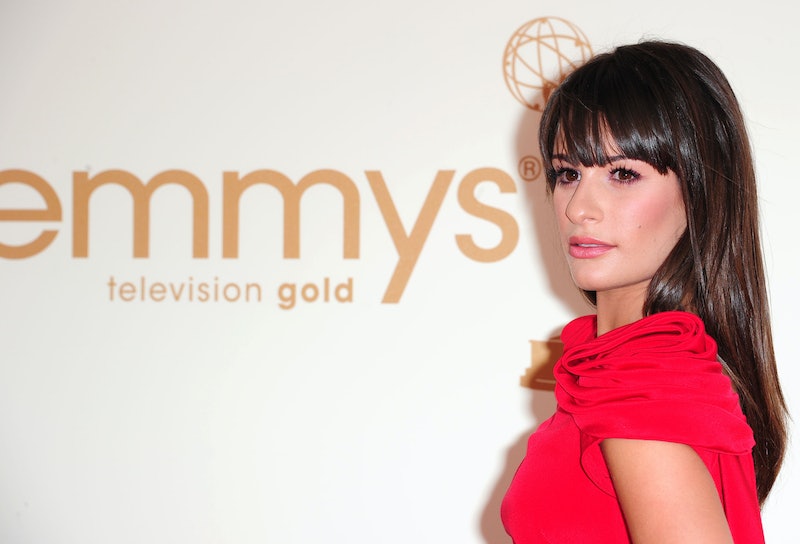 There's nothing that I love more than a good old fashioned horror show, which is why I'm majorly hyped for Ryan Murphy's latest anthology series, Scream Queens. The horror comedy TV series, which will premiere on Fox in 2015, stars a killer cast (no pun intended) including original Scream Queen Jamie Lee Curtis, American Horror Story alum Emma Roberts, and newly minted pop star Ariana Grande. Because this is Murphy's project, the cast unsurprisingly includes former Glee darling Lea Michele, who joined Scream Queens shortly after Glee wrapped. Though character details are still mostly under wraps, we did get a major clue at who Michele will be playing on the new series — and it might be slightly disappointing for fans who thought that the actress could be branching out from her iconic Glee character.

When an early set photo of Michele wearing preppy sorority girl attire popped up on the internet, I assumed that Michele would be playing leader of the pack. The show is set in a college and has unveiled promos of sorority girls snapping demonic bubblegum, so it seemed logical that Michele would be one of this ladies. Now, Michele has been revealed to be the total opposite of that: Michele is playing a "dork" named Hester, whom the bitchy sorority president takes to calling "Neckbrace" due to her neck gear.

According to Ryan Murphy's interview with Entertainment Weekly, Hester will do anything to be like the popular leader, Chanel, played by Emma Roberts:

"This girl wants everything Chanel has and will do anything to get it... We won’t let [Michele] put on any make up and she wears these horrible 1995 tracksuits. But there’s a great turn that happens half-way through the season with that character."

I'm a firm believer that Michele can take on any role her heart desires, but I'm a little bummed that she's playing someone who seems so similar to her iconic character from Glee. Rachel was a striver who constantly felt insecure compared to popular girls like Quinn — whom in one episode she actually decides she wants to look like so badly, she contemplates a Quinn-inspired nose job. And, much like Rachel, it seems that Hester will go through some major transformation later in the series, just as Rachel did when she moved to New York.

The similarities aren't necessarily problematic, of course — though the show has yet to premiere (so, of course, it could be completely different than what rumors state) as of now, they really just sound not all that exciting. Michele hasn't done a ton of television throughout her career, and for a new, major role, I'd love to see her in something that feels completely different from Ms. Berry. Here's hoping that Hester doesn't have any musical theater aspirations — and that Scream Queens proves us all wrong when it premieres in 2015.