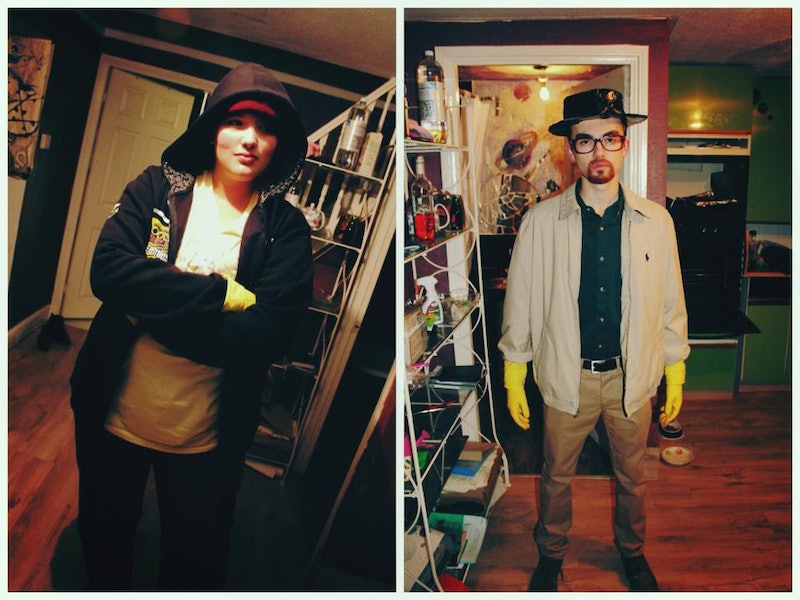 The Breaking Bad serie s finale has left a hole in many of our hearts. Many of us have started re-watching every episode from the get go, or anxiously begun counting the days until Better Call Saul (tricky considering we don’t know the exact air date yet, but we’re counting anyway!).

So when my boyfriend and I were in a problematic Halloween situation, there was nowhere to turn to other than Breaking Bad. We had about five hours to come up with a couple's costume for a party. After tossing around a couple unfeasible ideas, it hit us: Walt and Jesse. Within five hours we had everything we needed.

As long as you’ve got a few staple pieces in your wardrobe, it isn’t too hard to find the rest of the essentials around the house or in boxes of old clothes, or to take a trip to an discount department store like T.J.Maxx or Marshall’s for an express shopping spree.

We handled Walt’s costume first. The essentials were:

You could go two ways with the foundation of the ensemble: black slacks and black windbreaker, or beige slacks and beige windbreaker. You can snag cheap essentials, like a pretty perfect jacket in black or tan, at Walmart. In terms of shirts, Walt kept it pretty simple on the show — button-down with check or solid print – essentially anything a respectable high school chemistry teacher would wear.

As for accessories, many men already own a pair of desert boots. Paddy had some beige ones. But if you don’t have a pair, you can easily get 'em on Amazon. Then, throw on a pair of glasses — either sunglasses or regular ones will do.

But the quintessential Heisenberg hat was what we were missing. And seriously, Paddy couldn’t have gone to the party without the hat — he would’ve just been a nerdy looking man in basic work clothes. There were no shops anywhere in the vicinity that had anything similar, so we made one by using a sturdy cardboard box for the rim (with a plate to trace the perfect circular head shape) and a cereal box for the top of the hat because it was a more moldable cardboard. With a bit of black work tape to hold it together and create the color, we were good to go. The hat making took the longest — I’d say allow an hour or two for this step. But it was well worth it.

Then it was my turn. I wanted to be Jesse, because, well, he's the best. It couldn’t have been easier to find all the essentials:

Had Paddy or I been hoarders through our adolescence, all of the items would still be in our wardrobes. But we had to go on a last-minute shopping spree. We basically found everything at T.J. Maxx. I purchased massively baggy jeans from the men’s section, a street hoodie (couldn’t find a yellow one, but at least I found a yellow tee shirt; we know color plays a huge role in Breaking Bad). You also need some good, old skater shoes.

All in all, I spent about $30 on the entire costume. We were able to find a beanie at home, so that saved a few bucks too.

The final touch for us both was of course the yellow kitchen gloves. You probably have a pair, and if not, any local grocery store or pharmacy will for about $2. Once Paddy and I slipped on those gloves, we were Walt and Jesse (okay, maybe not, but we were so happy to have them back in our lives).

More like this
This 'One Tree Hill' Wardrobe Error Is Going Viral On TikTok
By Brad Witter
This 'Bachelor' Contestant Had The Best Reaction To Wearing The Same Dress As Another Woman
By Grace Wehniainen
Kate Middleton Wore The Ultimate '90s Power Suit
By Sam Ramsden
Beyoncé Wore A Golden Sheer Gown At Her VIP Dubai Concert
By Sam Ramsden
Get Even More From Bustle — Sign Up For The Newsletter
From hair trends to relationship advice, our daily newsletter has everything you need to sound like a person who’s on TikTok, even if you aren’t.