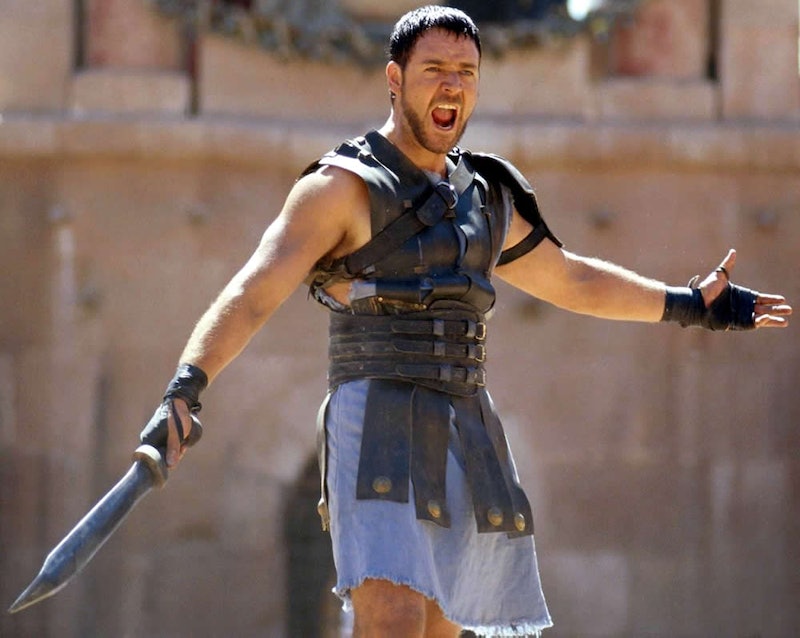 My obsession with the film Gladiator and its star Russell Crowe took up a good chunk of my life when I was 14 years old. I was too young to see the film in theaters since the rated R Gladiator came out 15 years ago on May 5, 2000, five days before my 14th birthday. But I remember when my older sister came home after seeing it in the movie theater and I asked her how she liked the nearly three-hour-long film. She said it was good, but that it was a movie she'd never need to see again.

Well, the rest of the world disagreed. Fifteen years after the Ridley Scott movie came out, the film is still ridiculously quotable. Reading Gladiator 's quotes page on IMDb is just like reading an old diary — seriously, that is how much the film is referenced in pop culture. Once my parents purchased the DVD of Gladiator, I watched the film incessantly and I'd spend my afternoons in freshman year of high school watching the behind-the-scenes segments and interviews — thus my allegiance to composer Hans Zimmer and my love of Richard Harris pre-Dumbledore.

Gladiator was a movie I could quote 15 years ago (I have some friends who associate me with Gladiator quotes, that's how passionate I was) and can still quote today, along with a plethora of other Gladiator nerds. I even have it to thank for starting my long love affair with the Academy Awards since Crowe and the film were nominated in 2001 — and won. Although I would have liked Crowe to have won the Best Actor Oscar more the next year for A Beautiful Mind. (He lost to Denzel Washington for Training Day.) But hey, three back-to-back Best Actor nominations — and one win — is still a pretty impressive feat.

Although my fervor (and obsession) for Crowe and the film has died down significantly over the last 15 years (thanks, Les Mis), I will always have vivid associations with Gladiator quotes and love that they have transcended a film about ancient Rome to become pop culture phrases. So for the movie that made a bunch of Americans love a Spaniard, here are some of the top Gladiator quotes that the world of pop culture loves to reference.

"What We Do In Life Echoes In Eternity."

Maximus was ranked 35 in Empire's list of the 100 Greatest Movie Characters and for good reason. He starts the movie as the badass commander of the Roman army, who also happens to give eloquent and inspiring pre-battle speeches. Street artist Banksy used the quote of "What we do in life echoes in eternity" back in 2013 in Queens, N.Y.

"At My Signal, Unleash Hell."

Another moment highlighting Maximus's power right up front is when he tells Quintus (later of "Sheathe your swords!" fame), "At my signal, unleash hell." They had just said "Strength and honor" to one another and Maximus was ready to lead the army of Romans against the barbarians. Quintus betrayed Maximus, not realizing that Maximus would always be "unleashing hell" — not unlike the U.S.'s current commander in chief.

"It Vexes Me. I'm Terribly Vexed."

Gladiator not only made a superstar out of Crowe, it also made the actor who portrayed its villain, Commodus, a household name. Joaquin Phoenix (perhaps best known at the time as the younger brother of River Phoenix) creeped us all out as the Maximus-hating, father-murdering, and sister-loving Caesar. One of his greatest lines, "It vexes me. I'm terribly vexed" was made into a T-shirt (above, with a photo of a bust of the actual Commodus) and at the time, Entertainment Weekly called the line a "summer-movie catchphrase."

"Am I Not Merciful? AM I NOT MERCIFUL?!"

The "Am I not merciful?" speech/scream by Commodus to his sister, Lucilla (portrayed by Connie Nielsen), is a personal favorite of mine. Phoenix, yet again embracing the disgusting character to perfection, tells Lucilla she will make him a pure heir (eee). When she turns away from his kiss, Commodus loses his goddamn mind . . . kind of like the face on that Lucille Ball statue in Celoron, New York that's been causing a lot of controversy lately.

"You Sold Me Queer Giraffes."

Oliver Reed, who played lovable gladiator-owner Proximo, died while Gladiator was still filming. The British actor has many roles that he can be remembered for — and Proximo is definitely at the top of that list. The film's introduction to Proximo is in Zucchabar (a province of Ancient Rome) where he grabs the junk of smarmy salesman who sold him "queer giraffes." (Because of the bad deal, he ends up buying Maximus as a slave.) A band in Belfast, Ireland that formed in 2002 is called Queer Giraffes. Although I can't find anything official from the band saying the name is definitely from Gladiator, I think it's safe to assume Proximo's line from the 2000 film inspired them. Plus, "Queer giraffes" even has its own entry on Urban Dictionary.

"Are You In Danger Of Becoming A Good Man?"

The actor who portrays good-guy-who-does-bad-things Mike Ehrmantraut of Breaking Bad and Better Call Saul, Jonathan Banks, knows the wisdom in quoting Gladiator. While talking about Breaking Bad, Banks told Rolling Stone , "I love Russell Crowe's line to Oliver Reed in Gladiator where he asks him, 'Are you in danger of becoming a good man?' It's one of my favorite lines ever."

"Smile For Me Now, Brother."

The world of sports is even inspired by Gladiator. The "Smile for me now, brother" quote is what Commodus says to Maximus, right before he sneakily stabs him before their battle in the arena. (Commodus, you bastard!) The tweet above shows former NFL coach Jim Harbaugh hugging San Francisco 49ers CEO Jed York. Harbaugh is no longer the 49ers coach and moved to the University of Michigan, so that may explain his death stare. Although Commodus and Maximus weren't real brothers or anything, the only thing that would make this comparison better is if Jim Harbaugh was hugging his brother, Baltimore Ravens coach John Harbaugh, in the photo.

Perhaps the most memorable quote of the film is when the Spaniard reveals his identity to actually be Maximus Decimus Meridius to Commodus after the first epic battle in the Colosseum. (The one where Maximus rallies his group of slaves to survive the recreation of the Battle of Zama — where the odds were seriously stacked against them.) After Maximus's public sassing, Commodus was forced to let him live due to the overwhelming chants of "Live" from the crowd. Whether you're a war commander trying to avenge your murdered wife and son (who was the same young actor as Joshua from Life Is Beautiful!) — or the father featured in an Awkward Family Photos picture — you can understand the passion of revenge.

"Are You Not Entertained?"

OK. OK. Maybe this is the most memorable quote from the movie. Well, at least it's one of the most memorable scenes (you know, besides the tiger fighting). In one of the simplest, yet most impressive fight sequences I have ever seen, a pre-Rome gladiator Maximus casually annihilates his competition one-by-one, ending with the double sword beheading trick. He then chucks one of the swords up into the stands while screaming, "Are you not entertained? Are you not entertained? Is this not why you are here?" (I'm getting a movie boner just thinking about it.) As seen above, Fox's animated series Bob's Burgers spoofed the quote when Bob wrestled his son Gene. And even Crowe has a good sense of humor about it.

These aren't the only Gladiator quotes that still get love after 15 years (for example, there's Commodus's speech about the busy little bees who conspired . . . and conspired), and it's a testament to how epic the film is that everyone still wants to reference it.

And just for good measure, although the theme of this 2004 Pepsi commercial with Enrique Iglesias (!), Pink (!), Beyoncé (!), and Britney Spears (!!) was probably inspired by gladiator fighting in Ancient Rome in general, I feel confident attributing it to the 2000 film.

Thumbs up, all the way!