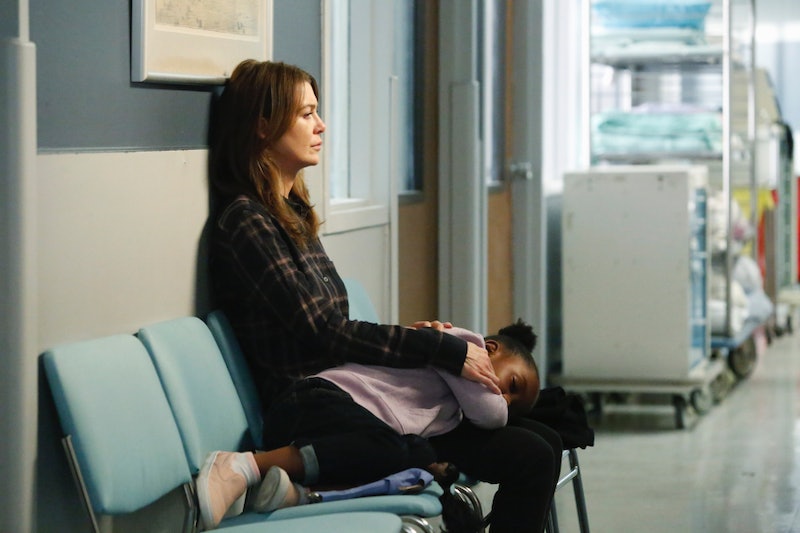 So, it’s finally happened. We all saw it (or got it spoiled for us the morning after). Ding dong, Derek Shepherd is dead on Grey's Anatomy . Whether you’re devastated or intrigued about his death, one question looms large in the minds of Grey’s Anatomy fans: What will happen to Meredith? How will she cope with the loss of her husband? Will Meredith fall in love with anyone else on the show? It may seem too early for some to even ask the latter question, but much of the foundation of Grey’s Anatomy is based on Meredith’s romantic status, as well as her career path.

We as viewers have watched Mer and Der dance around and through their relationship for 11 seasons now, so it seems to me that Grey's Anatomy could become untethered without someone there for Meredith to love. In fact, it seems as if Meredith herself could become untethered without someone to love. Derek was always her constant — through Finn, through Addison — and she could be just episodes away from George-Clooney-in-Gravity floating away from Sloan Grey Memorial Hospital. I think we’re about to see a brand-new Meredith emerge from the ashes of this tragedy, and boy, will there be plenty of shades of Ellis in Meredith’s new persona.

Like it or not, Meredith’s hardened surgeon mother, even in death, still has a strong hold on Meredith. Ellis was a brilliant mind and an incredible surgeon, but all of this came at the expense of Meredith’s self-esteem and a stable family life. Post-Derek, Meredith will be the surgeon that she was when he was gone in Washington, D.C. She will continue her streak. She will continue her research. She will become a better doctor bolstered by the fact that this is what Derek would have wanted her to do with her life. He supported her, and I think this would somehow comfort her — like she would have his blessing. If only she could win a Harper Avery (we all know how that went with Cristina).

But erasing a page from the Ellis Grey playbook, Meredith would not do all of this at the expense of her children. That’s where Meredith and her mother would differ: I think Meredith learned a lot from Ellis' parenting mistakes. Ellis taught Meredith the foundations of being a doctor, but she also taught Meredith how to run from, um, everything, the latter not being the greatest thing to pass onto your children. Post-Derek, Meredith will be Zola and Bailey's only parent, bringing them up to value the work that their mother does, not fear it. She will likely also break the cycle of her life and teach her kids how to love.

So, will Meredith ever find another love like Derek? Definitely not. In fact, I don’t think she’ll love again at all. Being a full-time mom and a full-time surgeon doesn't much room for romance, and I don’t think that Meredith would want another serious relationship, anyway. She’s loved and lost the man of her dreams, and I think from now on, she'll focus on her work and their family.