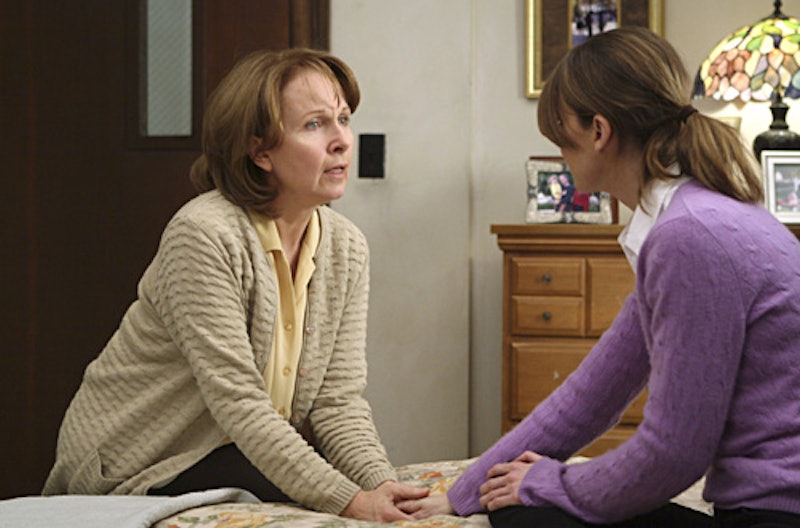 Has a television show ever portrayed a worse mother than Grey's Anatomy 's Ellis Grey? OK, there may be other characters out there that could give the cutthroat surgeon on ABC's medical drama a run for her money (here's looking at you, Gemma) — but Meredith's mommie dearest would definitely be at the top of the list. She was an exacting, distant, unloving presence in Meredith's early life and often referred to her, scathingly, as being disappointingly "ordinary." This week's episode, titled "Only Mama Knows," will focus heavily on the deceased doctor: "Secrets from Ellis Grey’s past come to light when Meredith watches old videos and reads through her mother’s journals."

Even though Ellis gave up the ghost way back in mid-Season 3, her presence has continued to haunt both Meredith and the show itself. In Season 4, Meredith underwent therapy to deal with her complicated mommy issues; we've seen Ellis herself in flashbacks and parallel universes; and now she'll make a complicated return once more.

In order to steel yourself against the onslaught of secrets and upsetting memories about to ensue, here's a rundown of Dr. Grey Sr.'s many secrets. Never go into battle against Ellis Grey unprepared.

She had early-onset Alzheimer's

Although she was an incredibly gifted surgeon who was nominated for the prestigious Harper Avery Award five times (and won once), Ellis's career was cut short when she developed early-onset Alzheimer's. This was the earliest secret of hers that was revealed on the show, as new viewers heard everyone raving about Meredith's amazing mom throughout the pilot, only to discover at the end of the episode that she was living under assisted care, her mind all but gone.

It was Ellis' desire to keep her Alzheimer's a secret, so Meredith told everyone that her mother was taking a sabbatical and traveling the world. Her true condition become common knowledge when Ellis had to be treated at Seattle Grace for a health concern.

She had an affair with Richard Webber

Not only was Ellis uninterested in raising Meredith, she was also equally uninterested in her own schlubby husband, Thatcher. She and Dr. Webber met when they were both residents, and they quickly found common ground as minorities in the competitive world of medicine during the 1970s and '80s. They bonded while caring for a patient with GRID (gay-related immune deficiency, an early — and crude — acronym for AIDS), whom none of the other doctors would go near.

Eventually Thatcher found out about Ellis's affair and left her... also leaving Meredith behind with a mother ill-suited to raising her. However, Richard refused to leave his wife Adele for Ellis, and he ended up leaving Ellis as well.

She once "attempted suicide"

Crushed after being abandoned by both her husband and her lover, Ellis sat Meredith down one night, forbade her from calling an ambulance... and slit her wrists in front of her own daughter. Meredith waited until her mother passed out, dialed 911, and Ellis survived.

The reason "attempted suicide" is in quotes is because, while Meredith was in therapy during Season 4, she came to a realization: her mother was one of the most talented surgeons in the world; if she had wanted to kill herself, she would have. Ellis's "attempt" was nothing more than a cry for attention directed at Richard — and one that went unheard, at that. Ironically, Dr. Webber never heard about her attempt, and a prideful Ellis refused to ever mention it to him.

She had a secret love child

It was just revealed, as one of Season 10's cliffhangers, that Ellis had another daughter that nobody ever knew about: Maggie Pierce, who just moved to Seattle and joined Grey Sloan Memorial Hospital as its newest cardiothoracic surgeon. Maggie came to the Evergreen State after looking up her identity in the adoption files and learning she was a world-famous doctor who used to work in Seattle.

But who was Maggie's father? Richard, of course. Dr. Pierce was the product of his affair with Ellis, although she never told him. Shortly after her suicide attempt, Ellis took Meredith and moved to Boston, where she gave birth to Maggie in secret and gave her up for adoption.

She could have been Chief of Surgery

The Season 8 episode "If/Then" examined what the lives of the show's doctors might have looked like in a parallel universe. The entire premise of this alternate timeline was that Ellis never had Alzheimer's, and Meredith was raised by two loving and supportive parents. In this bizarro world, Meredith and Alex were engaged, Derek and Addison were still married... and Ellis was the hospital's Chief of Surgery, who had recently won her third Harper Avery Award. Oh, and Meredith's two parents? Ellis and Richard. (Thatcher had apparently passed away of undisclosed causes.)

This unrealized future actually came close to coming true. Richard had previously mentioned that, had Ellis not fled to Boston, she likely would have become Chief of Surgery instead of him.

She murdered her husband when she found out he was gay

Oh no, wait — that was the Vice President on Scandal. Dang, Ellis Grey and Sally Langston look a lot alike, don't they? And they're both equally awful, no wonder I get them confused...

She has been played by three different women

Although Kate Burton originated the role of Ellis Grey and is most famous for playing it (credited in 17 episodes of the show), three different actresses have actually appeared onscreen as Meredith's mom. In the Season 6 flashback episode "The Time Warp," a young Ellis was played by none other than American Horror Story fave Sarah Paulson. Young Ellis will be appearing again in "Only Mama Knows," but sadly Paulson was unavailable to reprise her role, since she's a bit busy having two heads and fending off terrifying clowns at the moment.

Instead the role was recast, and now Sally Pressman will be stepping into Ellis's disapproving shoes. Pressman was formerly a series regular on Lifetime's Army Wives, and she also appeared in three episodes of Scandal as Candace Marcus, the younger sister to the Presidential candidate played by Lisa Kudrow.