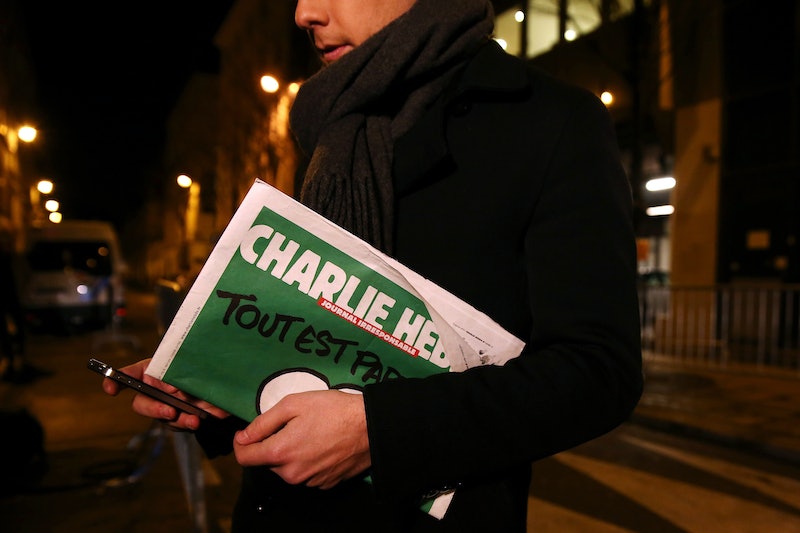 Charlie Hebdo, the satirical French magazine that was attacked by extremists earlier this year, is scheduled to be honored by the PEN American Center, but not everyone is pleased by the decision. Six authors have withdrawn from the PEN Gala, citing the choice to present Charlie Hebdo with an award as the cause. And they in turn have faced criticism for the move.

The authors in question are Michael Ondaatje, Francine Prose, Teju Cole, Rachel Kushner, Peter Carey, and Taiye Selasi, who were among the 60 authors scheduled to host the May 5 gala. In explaining her decision, Francine Prose told the Associated Press that she supported "freedom of speech without limitations" and that she "deplored" the attack on Charlie Hebdo's Paris offices, which killed 12 people. However, she did not support giving the satirical magazine, which many consider to be highly offensive, an award. "I couldn't imagine being in the audience when they have a standing ovation for Charlie Hebdo," Prose said.

In an email to the New York Times, Rachel Kushner stated that she was uncomfortable with the “cultural intolerance” of Charlie Hebdo and its promotion of “a kind of forced secular view.” Peter Carey concurred, saying, "A hideous crime was committed, but was it a freedom-of-speech issue for PEN America to be self-righteous about?”

And that certainly is a valid question. After all, the January attack on Charlie Hebdo 's offices was unconscionable and cannot be denounced strongly enough. The very fact that anyone would think it in any way that something someone wrote could justify taking their lives is monstrous and antithetical to the very foundation of a free society. Condemning the Charlie Hebdo attacks, however, does not automatically require one to endorse Charlie Hebdo or the many ways they have over the years behaved in an insulting and disrespectful manner towards Muslim communities in France.

In other words, you can support Charlie Hebdo's right to say whatever they want while still not at all supporting what they actually say.

However, some in the literary world have haven't been thrilled with the decision. Author Salman Rushdie, for instance, who was forced into hiding by Islamic extremists after the publication of his novel The Satanic Verses, publicly said that he believed the authors — some of whom are his friends — are “horribly wrong.”

“If PEN as a free-speech organization can’t defend and celebrate people who have been murdered for drawing pictures," he said, "then frankly the organization is not worth the name.” He also expressed his displeasure on Twitter.

(Because apparently what this situation really needed was gendered insults?)

The PEN organization says that they still plan to go ahead with the award and are surprised by the backlash. Andrew Solomon, president of PEN said, “We all knew this was in some ways a controversial choice,” he said. “But I didn’t feel this issue was certain to generate these particular concerns from these particular authors.”

In a piece published on their website, PEN America explained:

Indeed, were the Hebdo cartoonists not satirical in their genesis and intent, their content and images might offend most or all of us. But, based on their own statements, we believe that Charlie Hebdo's intent was not to ostracize or insult Muslims, but rather to reject forcefully the efforts of a small minority of radical extremists to place broad categories of speech off limits — no matter the purpose, intent, or import of the expression.

The issue is a tricky one, without a clear answer. On the one hand, after a publication is so viciously attacked and many of its writers and staff members killed, it does seem somewhat fitting for a free speech organization like PEN to honor them. However, given that PEN is choosing to do so in a way that also implies approval of what Charlie Hebdo actually publishes, that also raises the question of whether upholding a publication that frequently belittles minority groups really is the best way to honor freedom of speech.

Of course, the only consistently true thing about freedom of speech is that it means people are going to disagree with one another — which is good, because hopefully all the discussion will lead to new and better ideas. So should the PEN American Center be honoring Charlie Hebdo? Does failing to honor them send the signal that only certain, respectful forms of speech are worth protecting? Does agreeing to honor them imply that being under attack automatically means speech is worthy of praise, no matter how harmful or distasteful many find it? Well, the whole thing is obviously complicated — and thus, precisely the sort of tricky issue freedom of speech was made for.