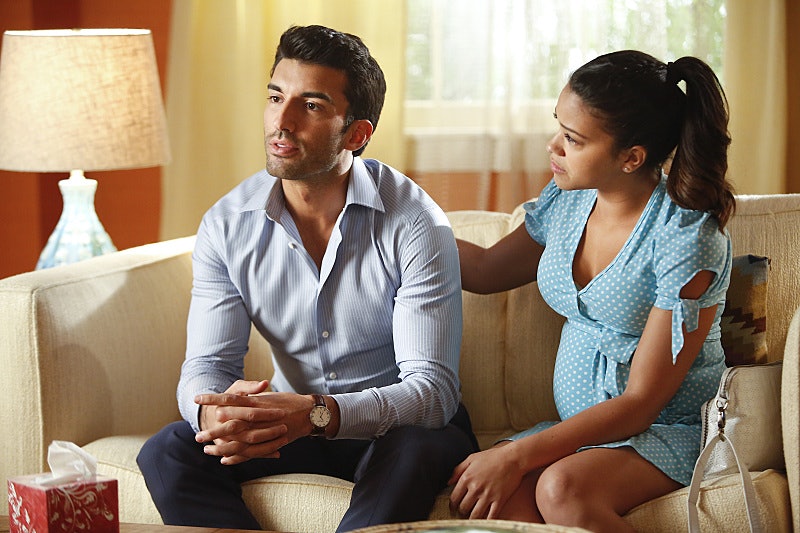 "When love goes bad" should be the new tagline for Jane the Virgin. Alba is going out on dates with a priest, Xo and Rogelio are still broken up, and Jane decided she wants to raise the baby without Rafael in "Chapter 20." What the what?! Wasn't Jane always a proponent of making sure their baby was raised with its father since she had never met her dad until now? I understand that the breakup wound from Rafael ending things in "Chapter 18" — and again in "Chapter 19" (grrr, Rafael!) — is still fresh, but should Jane really want full custody?

Although Jane can get very emotional, she's also a very smart person, and her reasoning for wanting to keep her baby from the Marbella (where Rafael lives) is actually pretty airtight. Rafael's sister Luisa returned to the hotel, and as much as it's exciting to have the character back on screen, she's not really the type of person you want around your newborn baby. 'Cause, you know, she's a recovering alcoholic, she was sleeping with Sin Rostro, andddd she was the one who accidentally artificially inseminated Jane in the first place. As much as I love Luisa's character, Jane's hesitation to have Aunt Luisa around is legitimate.

Then you have Petra and her mother Magda. Petra and Jane have almost always been at odds with one another since they are in love with the same man, but when Alba recovered her memory from her traumatic fall down the stairs in "Chapter 19", she recalled that it was Petra's mother who pushed her. Since Petra and Magda were holding Ivan hostage in their room at the time of the incident, Petra decided to cover for her mother and lied to Michael (who was investigating the case) by saying the pair had nothing to do with Alba's fall. Jane may forgive a lot of things, but lying about almost killing her abuela? No freakin' way.

All of those issues, plus the fact that the Marbella was home to a couple of murders recently, definitely make a strong case for Jane not wanting to have her child anywhere near the hotel. And unfortunately, that's where the child's father lives. Rafael confessed to Luisa that he let go of Jane to save the hotel for his family's legacy — and Luisa told Rafael he should have given up the hotel and not Jane. Unfortunately for Rafael, he's going to learn that the hard way real soon since Jane told Xo and Alba she wants to hire a lawyer to get full custody of their unborn baby.

I'm just hoping that Jane has a change of heart. I know that she will be a fantastic mother — whether she's a single parent or not — and she'll have the support of Xo and Alba. But despite how much drama surrounds the Marbella, Jane should know deep down that Rafael will make a great father.

More like this
What Song Does Eddie Play in 'Stranger Things'? Metallica’s “Master Of Puppets” Ignites The Season 4 Finale
By Alyssa Lapid
'The Summer I Turned Pretty' Book Ending Is An Emotional Rollercoaster
By K.W. Colyard
The Future Of 'All Creatures Great & Small' Is Confirmed & Wedding Bells Are Ringing
By Rebecca Fearn and Frances Stewart
Martin Hancock’s Wife Played A Key Part In His Return To 'Coronation Street'
By Catharina Cheung
Get Even More From Bustle — Sign Up For The Newsletter