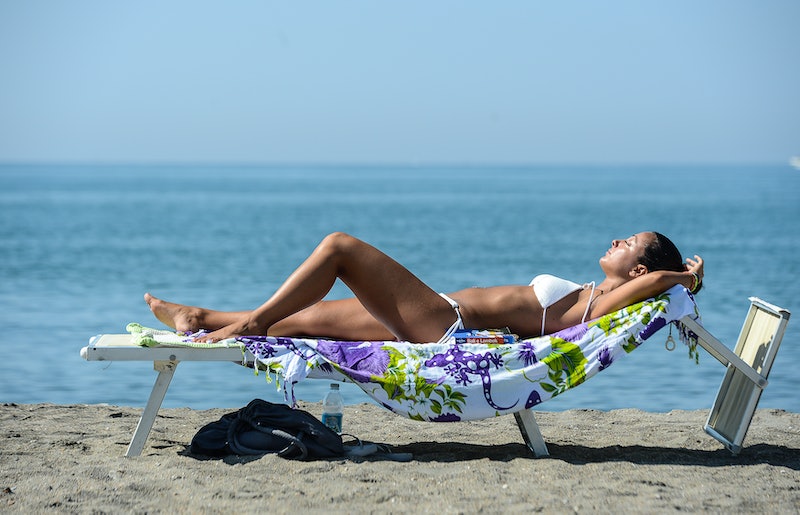 Beach season is pretty much upon us and I could not be more excited. But now that the clothes we're wearing are becoming smaller, some of us like to remove the hair that might otherwise be making their annual debut. And if you're the kind of person who enjoys not constantly having to worry about hair removal, waxing is the way to go — which leaves you prone to making waxing mistakes. Seriously, whether you're having it professionally done or doing it from the comfort of your own home, there are some common mistakes that over- (but usually under-) zealous waxers make. I mean, even though it doesn't take as much cumulative time to wax as it does to shave, waxing can be messy. And don't forget painful. (How could we??)

But there's good news. If you make waxing a routine form of hair removal instead of something you do once in a blue moon, it actually becomes less painful. This is because the more frequently hair is removed from the root, the thinner it becomes (and therefore easier to remove) over time. On top of the fact that it does indeed get better, there are nine other ways to improve your waxing experience. So make sure you don't make these mistakes for a more successful and less painful wax.

Your hair should be one-quarter to one-half inch long before you consider waxing. If hair is any shorter than this, it might not properly adhere to the wax. And having to repeatedly wax or go after all those hairs individually is just way too time consuming and painful.

2. Waiting Too Long Between Hair Removal

Alternatively, if hair is too long before you wax, it could break when you go to remove it. If it breaks above the surface of your skin, you'll have to go for a round two (which nobody wants to do). And if it breaks at or slightly below the surface, the hair will grow back more quickly than it would have if it had just been pulled out by the root to begin with. Basically, it's a lose-lose.

While it seems like a shot might be able to help add a little bravery, these stimulants can actually make the skin more sensitive to waxing. So if you're trying to make your waxing experience less painful, skip the wine.

4. Waxing Right Before Your Period

Similar to after having a couple drinks, your skin will be more sensitive in the days leading up to your period. Make sure to wax at least five days before you think it will start, or a couple days after it ends.

This one may sound a little counterintuitive, but there are a couple reasons to not wax right after a shower. The first is that the skin is more likely to be irritated by waxing after it has been softened by warm water. The second is that the natural oils found on the skin can act as a barrier between the wax and skin so it will not hurt or irritate the skin as much when it is removed. If you have just showered, try dusting a little baby powder on the area (but try to make sure none clings to the hairs) to act as a buffer. But better yet, just wait a few hours after showering before waxing.

6. Waxing In The Wrong Direction

Wax should be applied in the same direction the hair naturally grows, and it should be removed in the opposite direction. Not paying attention to these specific directions could result in breakage or having to go back in for seconds (no, thank you).

7. Only Using One Hand

If you're waxing at home, make sure to use one hand to pull the strip and the other to hold the skin taut. Holding the skin taut will make it hurt significantly less than allowing your skin to just go along for the ride.

This is just like a bandaid only worse. Not only will waxing be most effective if you pull the strip quickly, but pulling too slowly will only hurt more and possibly not remove as much hair as it could have otherwise. So just rip it off.

9. Not Properly Taking Care of the Area

For 24 hours after waxing there are a few things to make sure you don't do. The first is wax again. (If you're waxing at home, sometimes you might notice a few stragglers. Just let them rest a day, or go in with tweezers.) Also make sure to not take an extremely hot shower or bath, wear tight clothing, exfoliate the area, self-tan, or go swimming. Basically, just try to keep the area clean and let it breathe. After the area has healed, make sure to start regularly exfoliating to stimulate proper hair growth so you don't end up with any pesky ingrowns.