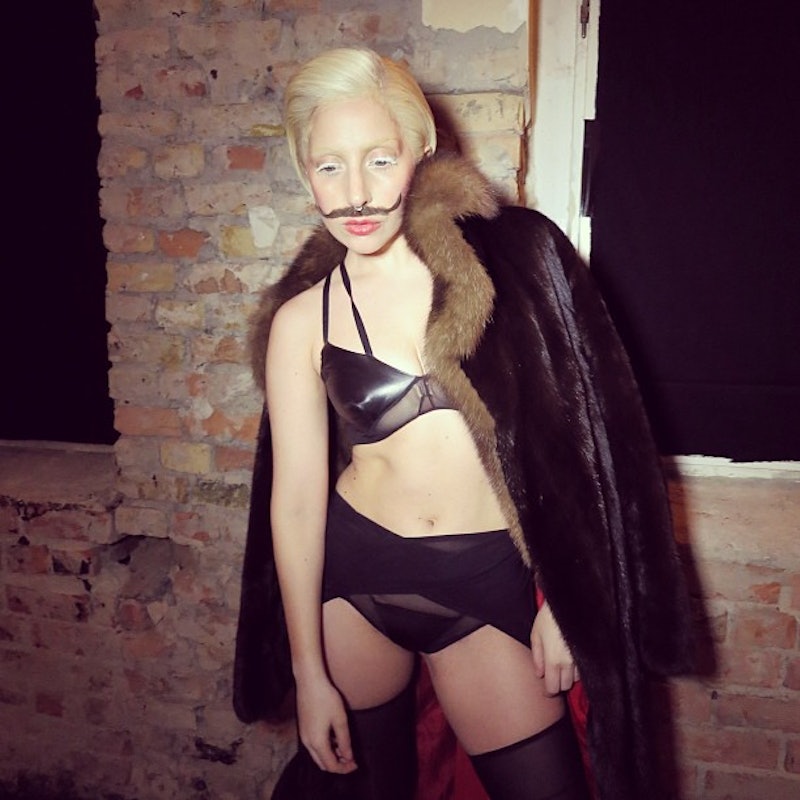 A world without Gaga's style antics is a sad, lonely place.

I mean, look at us. For the most part, we experience and consume fashion through fairly standard channels: fashion weeks, runway shows, seasonal collections, the H&M clearance rack. We know that transparent fabrics are on tap for Spring 2014, we notice when single-soled heels start showing up in stores, and we see our peers donning scarves as the weather gets cooler. For the most part, fashion translates pretty effortlessly into real life; we see it, we want it, we know where to get something like it.

But every now and then, we need to be shaken out of our sartorial complacency. After the hundredth runway show, it becomes hard to see fashion as anything other than a series of trends and seasons: dark lipstick for fall, pastels for spring, lace for bridal. And if you're someone who's obsessed with fashion, the whole personal-expression element can be difficult to spot, ironically enough, in a community where everybody around you is fashionable. (See: Our dawning collective boredom with street style photography.)

Enter Gaga, stage left, in a mustache, or a seashell bikini, or nothing at all.

Gaga is like neon — she comes and goes in cycles, and that's the only permissible way to consume her. In 2011, circa "Born This Way," I was experiencing what one might term Gaga Saturation, bored with her "crazy" costumes and her "unpredictable" antics. It was all starting to feel so self-conscious, so weird for the sake of being weird. Then Gaga, ever the savvy performer, vanished from the spotlight to work on ARTPOP before the whole world could grow sick of her posturing.

But as ARTPOP grew nearer to completion, the crazed-artist persona that is Lady Gaga began to trickle back into the public eye. There was "Applause," released as a single, then there was the "Applause" music video, and then there was her VMA performance, which was weird (but not meat dress-level weird). And over the past week or so, the Gaga weirdness has exploded into the public consciousness — and the fashion world is so ready for it.

Here's a non-definitive list of Gaga weirdness during the past few days:

1. She appeared to her fans in London as a goul, staggering out of her hotel in a see-through dress with her arms raised.

2. She got completely naked onstage in London. We knew this was coming eventually.

3. She wore a peacock headdress so large that she couldn't get into the car.

4. She lurched around in a paper dress with weird, dead-doll makeup.

5. Oh, and there was that whole chicken mask-wearing incident in Berlin (which she paired, savvily, with the world's most fantastic yellow belted dress).

6. She released a new song full of nonsensical lines like "Earth serve to the stars."

7. She scored Glamour's Woman of the Year award (not weird!).

8. She feuded and made up with Kelly Osborne (I still don't understand how those two have anything to say to each other).

9. And she has a bunch of strange mustache pictures on her Instagram.

She's not exactly shocking people; we've come to expect this sort of life-as-performance-art-as-critique-of-celebrity-as-love-of-fame conduct from Mother Monster. But after months of fashion shows and trend breakdowns, a little insanity for the sake of insanity is a breath of fresh air.

Gaga's antics are fresh once again. She's been quiet for so long that her weirdness feels good. This whole fashion month(s) thing has been pushing fashion toward the brink of saturation for years now, and while we're all happy to be wearing plum-colored lipstick for fall, the world just doesn't want to hear about it any more.

Right now — as we're about to be catapulted into the holiday whirlwind, our outfit options are simultaneously getting more limited (coats and boots, anyone?), and fashion weeks are still occurring worldwide — right now is when we need Gaga's weirdness the most. She's blowing into our lives like an icy Northern wind, bringing that unmistakable, cheek-stinging chill of change.