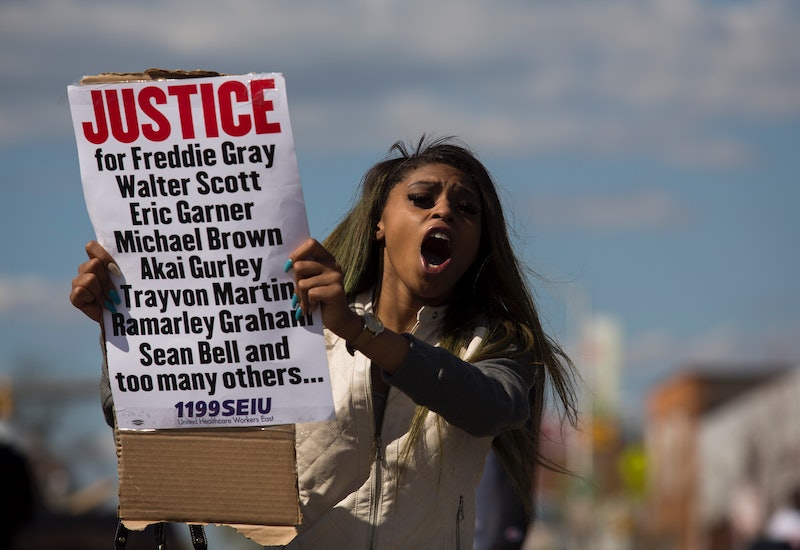 As protests of Freddie Gray’s death continue in Baltimore, I’m reminded of the protests in Ferguson last year — specifically, the dispiriting response from the white community that dominated social media then and is dominating it again now. This response is one that dehumanizes and stereotypes protesters as “animals” and “thugs” and ignores the fact that the majority of protesters remain peaceful and nonviolent. It is a response that fails to credit demonstrators who are working to restore calm, no doubt more effectively in some cases than the police.

For those who don’t know (and, yes, I think some of those speaking out so self-righteously against what’s happening in Baltimore don’t know — because they don't care to know), Freddie Gray was a 25-year-old black man who died in police custody. He was arrested on April 12 after running from police. He died on April 19 with a crushed voice box and a nearly severed spinal cord. Keep in mind that this happened while we were all still reeling from Walter Scott’s death on April 4, the black man who was fatally shot after running from police in South Carolina.

It should be a truth universally acknowledged that running from a cop should not equal a death sentence. And rather than arguing about how best to protest, we should be solving the problem that's being protested: police brutality against the black community.

Yet some in the white community use images of fires and broken glass and graffiti in an attempt both to discredit the Black Lives Matter movement and to undermine the ethos of the protesters.

I'm reminded of a time when I was in high school, when one of my white classmates stole gas from a local station, just to see if he could get away with it. He didn’t. And, because I grew up in a town like Mayberry on The Andy Griffith Show, everyone found out about it. Their response? They laughed. They said, “That kid: such a rascal!” They said, “Boys will be boys.” I knew then that if one of my black classmates had committed the same crime, he would have been written off as dangerous; a thug, a lost cause.

As Mic's Derrick Clifton wrote, “When a mob of mostly white people take to the streets, vandalizing cars, storefronts and street signs in the process it usually means someone either won or lost a game.” Drawing on an earlier piece, penned by Zak Cheney-Rice, Clifton continued: “These rioters are usually called ‘revelers,’ ‘celebrants’ and ‘fans.’ They’re not even called ‘rioters’ in many cases. They’re not derided as ‘criminals,’ ‘thugs,’ ‘pigs,’ or even ‘violent.’ Those descriptors, as events in Baltimore Monday night reveals yet again, are only reserved for black people.”

Freddie Gray, with his crushed voice box, is symbolic of a community that has been silenced and ignored for far too long.

Although we should acknowledge the tragedy of senior homes and community centers burning and condemn arson accordingly (if it was, in fact, intentional), we should check our hypocrisy at the door — because, yes, it’s hypocritical to condemn riots that erupt over things that matter (injustice!) and to excuse riots over things that don’t (sports? really?). And it’s hypocritical to decry vandalizing and looting and not to decry the killings that prompted the unrest in the first place.

Martin Luther King Jr. said as much: “It is not enough for me to stand before you tonight and condemn riots. It would be morally irresponsible for me to do that without, at the same time, condemning the contingent, intolerable conditions that exist in our society. These conditions are the things that cause individuals to feel that they have no other alternative than to engage in violent rebellions to get attention. And I must say tonight that a riot is the language of the unheard.”

Freddie Gray, with his crushed voice box, is symbolic of a community that has been silenced and ignored for far too long.

As Conor Friedersdorf wrote in The Atlantic, “Despite actively reading and commenting on police misconduct for many years, I was unaware until yesterday that the Baltimore Sun published a searing 2014 article documenting recent abuses that are national scandals in their own rights. A grandmother’s bones were broken. A pregnant woman was violently thrown to the ground. Millions of dollars were paid out to numerous victims of police brutality. And almost none of us noticed!”

Shame on us. If a riot is the language of the unheard, we are all culpable for not listening to these stories of injustice and calling for change. Some of those calls could include renewed commitments to demilitarizing and filming the police. Ferguson police have been issued non-lethal weaponry. The Guardian published an article years ago about the use of police body cameras in Rialto, CA and the "better policing" that ensued. Why not make this the new norm?

Martin Luther King Jr. also said that violence multiples violence. So if the white community wants to eradicate “violent” riots, it needs to start by eradicating the violence perpetrated against the black community.

In other words, we need to get to the root of the problem — and acknowledge that the root is white.