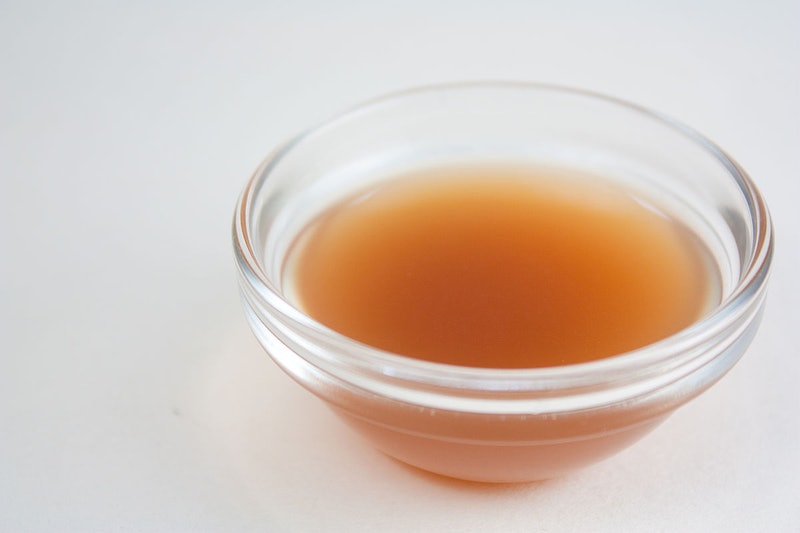 I went to sleep last night and the world was perfectly ordinary, but when I woke up apple cider vinegar had taken over the world. It turns out there are actually a ton of handy uses for apple cider vinegar, so step aside, coconut oil. There's a new randomly useful kitchen product in town. People are calling it ACV for short, which basically means apple cider vinegar is cool and hip enough to get an acronym and I've been alive 23 years without so much as a nickname. Way to steal everyone's thunder, ACV.

In case you haven't heard of the ~magic~ that is apple cider vinegar, it's time to school up so you can make your life easier (and perpetually smell like an apple orchard during pickin' season). The vinegar is made out of crushed apples and is a medium-brownish color, and you can find it pretty much at any regular grocery store with the rest of the vinegars. Usually it's used in salad dressings or other cooking type things that are beyond my level of expertise, but it's so much more than that. It's basically a super power in liquid form. If you don't believe me, try out these handy uses for apple cider vinegar and see for yourself:

As sexy as it is to have your own personal snow globe whenever you ~get down~, dandruff if is a real hassle. Skip the expensive salon spray and make your own with a quarter cup of ACV and and a quarter cup of water. Spray it in, leave it for fifteen minutes, and then wash it out. If you do this twice a week for a few weeks, your scalp will hopefully be doling out fewer flakes.

Let's be real, guys: The minty flavor in Listerine is way too aggressive for its own good. Instead you can make your own mouthwash with Mix 2 teaspoons of ACV and a quarter cup of water. The best part is, you don't have to worry about getting mouthwash poisoned if you swallow it. Just make sure to brush your teeth right after, because leaving the acidic ACV on your teeth can wear at the enamel.

I am sick as a dog literally as I type this, so #BYE, I'm going to buy some right this second. Here's the sore throat cocktail:

Mix it in a glass of warm water and it will help with the pain and with breaking up mucus.

You can swap it out for conditioner in the shower with a mix of one tablespoon ACV and one cup of water for extra shiny locks.

Supposedly the acidic overload interrupts the muscles that are spasming, and a gulp of this is a quick fix for getting rid of hiccups.

A long-term study showed decreased cholesterol in rats that regularly ingested ACV, and a recent study in Japan showed that people who drank an ounce of ACV a day showed lowered cholesterol over time.

You can make your own toner by putting a third of a cup of ACV and two thirds of a cup of water into a spray bottle. Ta da! It's supposed to help with acne, age spots, and pretty much the broad span of skin issues you might have.

Pour a cup of ACV into a thing of baby wipes, and then let it soak into them in the fridge over night. Then you can use the ACV wipes to rub on your feet in the morning and prevent foot odor throughout the day, because the acidity in ACV lowers the pH levels in your feet that cause unpleasant smells.

I know, yuck, but it happens to the best of us. You can soak a cotton ball in ACV and band-aid it to your foot overnight. It doesn't happen right away, but if you keep it up over time the wart will enlarge, then blacken, then painlessly fall off. So much better than having to go all the way out to a dermatologist.

Mixing one part ACV with two parts water can serve as its own natural deodorant, so you can skip all the questionable chemicals in store brand kinds.

If you know you're going to Benihana for someone's birthday bash, you might as well go prepared: Mixing a tablespoon of ACV and a tablespoon of honey into a glass of water thirty minutes before you dine can prevent some major indigestion.

Skip the energy drink (for everybody's sake), and when you're feeling the 3PM slump, add a tablespoon of ACV to a glass of cold water or chilled vegetable juice for a natural energy boost from ACV's potassium and enzymes.

It's almost summer, FINALLY. Alas, summer brings sunscreen mishaps and unfortunate sun coverage #fails, so it's good to have a back-up plan for healing those nasty sunburns. If you put a cup of ACV into a bath and soak in it, it should help restore some of the pH levels in damaged skin.

HEAVEN FORBID. But speaking of beaches, this is a good one to have in mind. Literally all you have to do is dump this stuff on it and it should help ease the pain and prevent the further spread of toxins. Basically nobody would have had to pee on Monica's ankle in friends if we'd all just wised up earlier. *shakes head*

As a former cross country kid, I have too many horror stories of night time "charlie horses" to count, and that was despite the bazillion bananas I was eating. For even more surefire protection from nature, mix two tablespoons of potassium-rich ACV and a tablespoon of honey to water, and drink before bed.

Apparently rabbits will be super turned off to your garden if you soak cotton balls in ACV and place them around your gardens or flower beds. Your loss, rabbits.

Pressing an ACV-soaked paper towel to a bruise might help fade the discoloration faster, because of its anti-inflammatory properties.