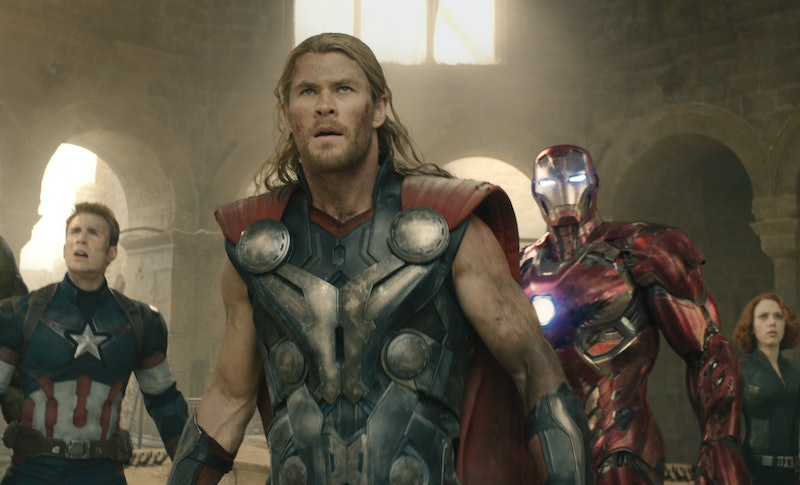 Start preparing for the worst, Marvelites, because it's true: Someone dies in Avengers: Age of Ultron . The scene is not a red herring, either — aka, it's nothing like what went down with Nick Fury in Captain America: The Winter Soldier. This person is not going to shake it off like Taylor Swift; he or she is gone. For good.

Age of Ultron, the highly anticipated sequel to one of Marvel's most successful films, hits U.S. theaters May 1, but it's already debuted to major box-office numbers overseas. So that means the fate of this unfortunate soul is already out there making the rounds in the blogosphere. In fact, it's going to difficult for the next couple of days to avoid all most of the film's spoilery details. I'll be sure to leave major spoiler warnings for all of you wanting to keep the mystery alive.

That said, let's talk about that Age of Ultron death...

If you know your Marvel movie news, you can already eliminate a ton of names. Captain America, Iron Man, Hawkeye, Black Widow, Falcon, and War Machine are all coming back for Captain America: Civil War ; Mark Ruffalo teased that Marvel has big plans for Hulk in future films; and Thor is coming back for Thor: Ragnorak. With all of these characters in the clear, that leaves Nick Fury, Maria Hill, Scarlet Witch, Quicksilver and The Vision.

And, ultimately, it's Quicksilver (Aaron Taylor-Johnson) who meets his maker.

His death was certainly unexpected. The super-speedster is one of the new characters introduced in Avengers: Age of Ultron, and the rumor mill suggested Marvel had bigger plans for him after this film — and furthermore, Hawkeye (Jeremy Renner) and Black Widow (Scarlett Johansson) seemed higher on Death's list. The film included strong hints that either one of them wouldn't walk away from this mission, but Whedon apparently had other plans for them.

So, what goes down? In the film's final battle, Ultron is fulfilling his master plan to destroy humankind, while the Avengers are fending off him and his robot army, and attempting to save everyone caught in the crossfire. As the rescue crafts are ready to fly all the civilians to safety, Hawkeye spots a young boy trapped in the rubble. He runs off the craft to save him, but he gets caught in a reign of bullet fire. Just as he's about to get shot full of ammunition, Quicksilver zooms in and throws himself in the crossfire, saving Hawkeye and the boy at his own expense.

It was a significant moment in the film: Quicksilver was introduced along with his telekinetic twin sister, Scarlet Witch (Elizabeth Olsen). The two had been depending on each for everything since they were very young. As children, their home was bombed by a shell, killing their parents and trapping them amid the rubble for days. They grew to rebel against their country's government and, in a desperate moment, volunteered for Hydra's secret experiments. Baron Wolfgang von Strucker (the guy from the Captain America: The Winter Soldier's first post-credits scene) promised to give them powers, and the twins were the only survivors.

At the moment Quicksilver drew his last breath, Scarlet Witch sensed it with her psychic abilities and crumbled to her knees, sending out a wave of energy and demolishing a horde of robots in her moment of grief. How's that for a heavy ending?

Age of Ultron hits theaters May 1.