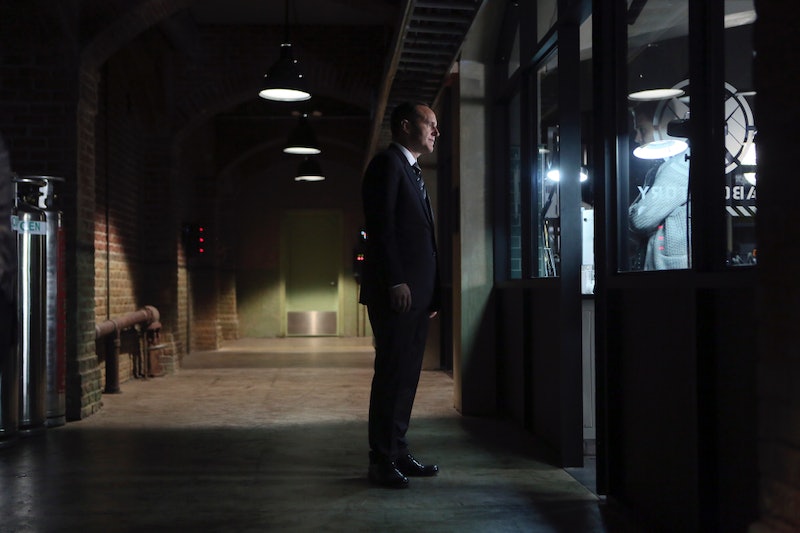 It looks like Agent Coulson still hasn't forgiven Loki for killing him. However, one of the passing mysteries on Marvel's ABC series just became a big deal in the MCU. What is the deal with Theta Protocol on Agents of S.H.I.E.L.D. ? At the end of Tuesday night's episode, Maria Hill Skyped into Agents of S.H.I.E.L.D. and asked if the protocol was ready. Coulson said that it was, and basically made the call to "bring in the Avengers." Between geeking out and screaming, is anyone else still majorly confused about what Theta Protocol actually is? This episode had a lot of fun moments. I'm still laughing at how Coulson "spoiled" Robert Gonzales when he let slip that Nick Fury is still alive. However, if this mission involves the Avengers, it is now officially a major concern on Agents of S.H.I.E.L.D.

I still think that Theta Protocol has to do with housing and protecting powered people. We know that this is something that Coulson has been working on since before the team entered the Kree temple. He first mentioned it to one of the Agents Koenig — who will, incidentally, make an appearance in next week's aftermath episode.

Coulson also sent Maria Hill the information that he downloaded from Hydra about Loki's scepter and where it, Baron Von Strucker, and Dr. List were hiding. It was implied that this is where "the twins" are being kept as well. The twins, of course, are Wanda and Pietro Maximoff, also known as Quicksilver and Scarlet Witch. Does Coulson want the Avengers to retrieve the Twins to "enroll" them in Theta Protocol? How is Steve Rogers going to feel about that? Is this how Civil War starts? I can't wait.

This all leads neatly up to Avengers: Age of Ultron. See you on the other side, folks!