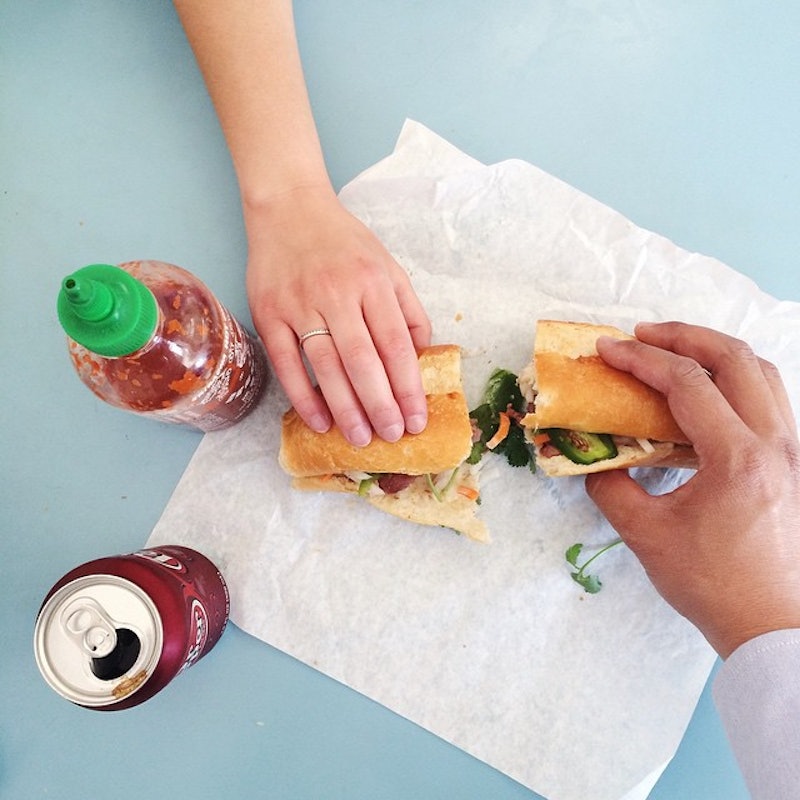 Guys, I just moved to New York two months ago, and while I have been enchanted by the likes of Central Park and theater and cupcake shops galore, my one true love here quickly became Seamless. I don't even remember who I was before I discovered it and I don't care to, frankly. My newfound addiction to Seamless aside, Uber Eats launched its own food delivery service this week, which prompted us to test Uber Eats and Seamless to see who would get here faster. We're doing the important work, guys. We're changing the goddamn world.

My partner in conducting this experiment was Bustle's lovely Associate Entertainment Editor Kadeen Griffiths who slays at life. (I also happen to trust her taste buds more than I trust other actual human beings.) The experiment was this: At peak lunch time, we would each order the exact same dish from the exact same restaurant, only Kadeen would order it from our tried and true Seamless, and I'd order it from Uber Eats.

First, a bit about how Uber Eats work: Right now, they offer two meals a day between 11AM and 2PM, and only in certain parts of the city. One option has meat and the other is vegetarian. The crossover meal that we found was Num Pang's Grilled Skirt Steak Sandwich, available for $13.25, which is about as much as I have ever or ever intend to pay for a sandwich again. (Spoiler: It only gets worse.)

In our experiment, we ranked the services on three criteria: promptness, price, and food quality. Gather round, everyone, as I take you through the bizarre tale of my lunch hour today.

Confession: I am an Uber virgin. I had to freshly download the app, despite my resistance to it after hearing plenty of Uber horror stories. But I bit the bullet, and at exactly 12:07PM, Kadeen and I both ordered the same sandwich and sat back to wait.

Uber said they'd be there in ten minutes or less, and they meant BUSINESS. Here was the delivery dude at 12:17PM, as promised.

He was very friendly and chill about me handing him back my sandwich and asking for a picture. Uber, I have several bones to pick with you today, but this guy at least is a keeper.

Eep. Seamless didn't get here until 1:17PM, a full hour and ten minutes after we ordered. And because I am the lamest friend ever, by then I'd fully devoured my sandwich in full view of Kadeen, who has the misfortune of sitting across from me. I AM A TRASH HUMAN but someday she will forgive me, maybe.

OK, I jest about my Seamless addiction, but I am truly a brown bagger at heart and try to limit myself to one lunch out per week. I took it today, and unfortunately, I ended up taking next week's, too.

Uh, WTF, Uber? The driver showed up and I was concerned about how I was going to tip him because the app didn't prompt me to, but when I looked back down at my phone, I saw this:

18 DOLLARS. FOR A SANDWICH. Be still my actual heart. There was no advance warning in the app that I was going to be charged an extra five dollars, or any explanation when it happened. I poked all around the app trying to figure out what the hell was up, but came up with squat. Honestly, that's enough for me to never, ever, ever use Uber Eats again, barring an apocalyptic explosion happening in eleven minutes that gives me a full minute left after Uber arrives to eat my last good meal on earth.

Steady, true, and reliable. Kadeen tipped on the site and nobody sneakily yoinked another five dollars out of her when the delivery guy came. I guess when you factor the five dollars into the extra time she waited, it's technically worth it. But in real life, I am not important or fancy enough to trade five dollars for waiting another hour for my food.

The skirt steak sandwich is pretty hard to mess up, so I figured we were going to get a good sandwich either way. But of course, given the nature of both deliveries, they were going to arrive a little bit differently no matter what.

(I'm sure I had an opportunity to take a better picture before I wolfed half this sucker down, but I was too hangry to stop myself.)

Well, here's how Uber manages to do what they do: The sandwiches are chilling in an insulated black bag for what looks like their entire three hour shift, and then they run around and dispense them like fairy god deliverers to the hungry people of New York. By the time I got mine, it was a little lukewarm, but still good. Did it taste like I was eating 18 freaking dollars? Hell no. But it wasn't bad, either.

OK, apparently life can be worse: By the time Kadeen's sandwich came, it was cold. Basically nobody wins when it comes to heated food and delivery.

Dear Uber: WOW. This Uber Eats things is real and you are super good at it. But I also feel slightly robbed, but I guess it's not your fault that this is what sandwiches cost these days, so this is probably my issue to deal with. Still, Seamless may make you wait for awhile, but at least I'm not going to have PTSD looking at a Seamless charge on my credit card bill the way I am going to when I see Uber Eats on my statement next month.

Well, there you have it, New York. I can't tell you what to eat or how to eat it, but I can fully inform you on the pros and cons of Seamlessing and Uber Eating to the best of my mostly broke ability. Happy lunchtime, y'all.