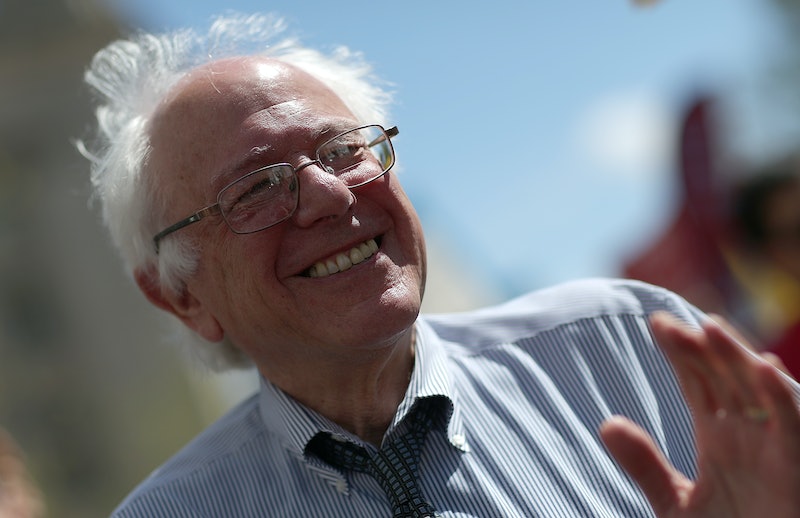 Now that he's officially announced he will seek the Democratic nomination for president and challenge Hillary Clinton, Vermont Sen. Bernie Sanders will be talking about his positions on major issues on the campaign trail, and one very big issue he has championed for years is gay marriage. Sanders, unlike some of his potential Republican opponents, seems like he would not turn down an invitation to a gay wedding (and he might actually get invited to one).

In 1996, then-Representative Sanders voted against the Defense of Marriage Act, which barred recognition of gay marriage at the federal level (DOMA was ruled unconstitutional by the Supreme Court in 2013). Sanders' and his home state of Vermont were the first to legalize same-sex unions in 2000, at first recognizing them as civil unions. Gay marriage has been legal in Vermont since 2009, and as The New York Times reported, Vermont was the first state to pass legislation in support of same-sex marriage, rather than in reaction to a court ruling.

On Tuesday, as the Supreme Court took up the issue of gay marriage, Sanders issued a statement on his website reaffirming his support, saying gay Americans in every state should be allowed to marry.

Of course all citizens deserve equal rights. It’s time for the Supreme Court to catch up to the American people and legalize gay marriage.

Well before the issue became as political as it is now, Sanders has been unwavering in his support of same-sex marriage, congratulating President Obama when he spoke in support of gay marriage in 2012. In addition, Sanders has spoken out for other LGBT rights as well.

The Human Rights Campaign, which advocates for civil rights issues, gave Sanders its highest possible rating for his stance on marriage equality. He's far to the left of Hillary Clinton on many issues, and while Clinton's position on gay marriage has changed over time (when she ran in 2008, Clinton opposed gay marriage), Sanders has been a supporter for more than 15 years. It appears safe to say that having Bernie Sanders in the White House would be a positive for the gay community and their civil rights.