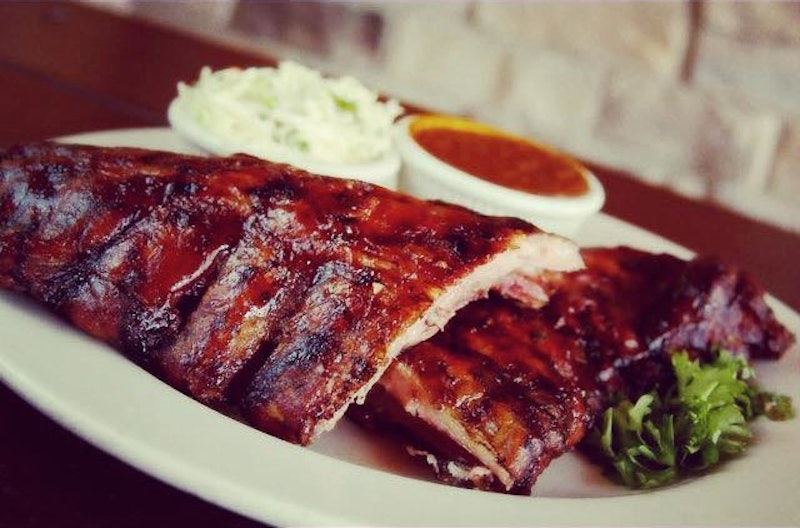 Once in a while on Shark Tank, you'll meet an entrepreneur whose personality is just so warm and whose drive and determination for success is so strong, you just know they're going to be a winner whether or not a deal is in the cards. They tend to be a hit with audiences too. That was the case with Al "Bubba" Baker, who appeared on Season 5 of Shark Tank with his daughter and business partner Brittani Bo Baker to convince the Sharks to sink their teeth into their company, Bubbas-Q Boneless Ribs, which we'll be able to catch up with on Friday night's episode of the Shark Tank spinoff Beyond the Tank .

With his big smile and jolly demeanor, Baker was a hit with the Sharks, and his patented formula for boneless ribs wasn't half bad either. Though Kevin O'Leary and Daymond John both made offers, Baker eventually partnered with Daymond, getting $300,000 in exchange for 30 percent equity in the company.

It looked like the Bakers were in for some finger-lickin'-good success when they walked out of the Shark Tank. Now that Bubbas-Q will be one of the first companies to appear on Beyond the Tank, we'll finally get to see if all of the Bakers' dreams have come true. Unfortunately, the description for this episode says that Bubbas-Q is having some issues with production, and the company isn't able to keep up with demand.

However, all in all, Bubbas-Q has been a runaway success since it appeared on Shark Tank. Here's why you shouldn't count the company out just yet.

1. It's A Little Hard To Get Ribs These Days

As I mentioned earlier, Bubbas-Q is having a hard time keeping up with the many orders it has received since appearing on Shark Tank. That might be why all of the ribs, rib steak, and burgers usually sold on Bubbas-Q's website are currently all sold out. I have a feeling the company will get that all sorted out by the time Beyond the Tank airs Friday night, but if not, there are a few places you can grab some Bubbas-Q. There's a Bubbas-Q restaurant located in Avon, Ohio, which also caters. These products are also in at least 150 stores nationwide, as of May 2014 when the Shark Tank: Swimming with Sharks special aired on ABC. Unfortunately, it's unclear exactly what those stores are, but it's kind of comforting to know that Bubbas-Q is out there, ready to be eaten.

2. These Ribs Have Raked In The Dough

During the Shark Tank: Swimming with Sharks special, Daymond revealed that he thinks Bubbas-Q will not only be the biggest deal to come out of the Tank, but it will also be the biggest deal he's ever done in his career. That's probably because Bubbas-Q found massive success right out the gate after appearing on Shark Tank. In the first 10 days after the company appeared on the show, it had more than $200,000 in sales, according to the Shark Tank: Swimming with Sharks special. Five months after the company's Shark Tank appearance, it had $400,000 in online sales. Seeing as how Bubbas-Q is struggling to keep up with demand, I think it's safe to say its sales are still strong more than a year after it made its Shark Tank debut.

3. Bubbas-Q Got Some Love From The Hallmark Channel

I have five words for you: boneless ribs mac n' cheese. No, this is not some crazy hybrid food you have to wait in line for a zillion years at some swanky New York restaurant. This recipe exists, and Daymond appeared on the Hallmark Channel to introduce it to the world since it uses Bubbas-Q Boneless Ribs and all. You can find the recipe here so you can finally stop your mouth from watering so much.

4. Bubbas-Q Is Heading To QVC

The Bakers may have made a deal with Daymond, but it looks like fellow shark Lori Greiner may be getting in on the action too. Bubbas-Q is slated to appear on QVC May 17. Buying boneless ribs from TV at 3 a.m. may seem kind of weird, but then again, isn't that actually the perfect time to do something like that?

5. Bubbas-Q Will Hit The Food Network Too

Bubbas-Q will soon be appearing where every food company hopes to be at least once: Food Network. It looks like the restaurant will be featured on Michael Symon's new show premiering in July, Burgers, Brew, and 'Que, where he travels the country tasting those three classic American delicacies. Bubbas-Q is located in Avon, Ohio, just outside of Cleveland, which is Symon's hometown. That means I expect these two to be BFFs.

6. Big Things Are Coming To Bubbas-Q

At least that's what it looks like. The company's website is currently under construction, which could mean many different things, but it does mean changes are a-coming. That could include a new design, a new online store, or maybe even new products.

Whatever Bubbas-Q has cooking, I'm eager to try it.

More like this
Rachel Responded To 'Bachelor' Fan Theories About Her TikTok With Clayton
By Grace Wehniainen
'Bachelorette' Vet Clare Crawley Revealed Her Stunning Wedding Photos
By Stephanie Topacio Long
Erika Jayne's Estranged Husband Tom Girardi Has Been Indicted On Fraud Charges
By Jake Viswanath
Everything To Know About 'RHOSLC' Season 4
By Jake Viswanath
Get Even More From Bustle — Sign Up For The Newsletter
From hair trends to relationship advice, our daily newsletter has everything you need to sound like a person who’s on TikTok, even if you aren’t.