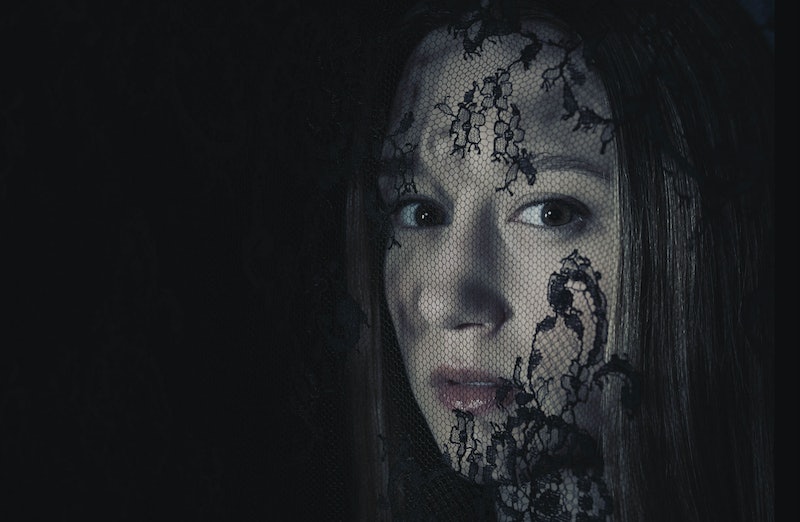 At the outset of American Horror Story: Coven , we were introduced to a young witch who'd just learned of her strange vaginal powers. Taissa Farmiga's Zoe narrated our first foray into Miss Cordelia's witchy school and quickly forged a bond with the audience; we were invested her whereabouts, her well-being, and her mission to bring the cute frat boy from the bus flip back to life. But with four episodes now under our belts, Zoe has all but slipped into the background. The most interesting thing she's done is not feed Kyle rat poison. AHS, what gives?

For the last three episodes, Zoe has happened upon a solution by accident (kissing Kyle to life); she's accidentally taken Kyle into the lioness' den (where his mother raped him until he killed her); and now, she's simply lost a grunting, hulking Frakenstyle monster and is standing in the doorway of his mother's house looking helpless. It begs the question, why would the writers have set her up as the heroine in AHS promos and the first episode if all she was going to do was chase some boy and fail at every turn? I'll say it: it's boring. So, so boring.

Her dialogue in every episode consists greatly of the words and phrases "Kyle," "What?" and "I'm sorry." Can we get a bigger mouth on her, please? For all the autonomy this young lady showed in episode one, when she hopped up on Madison's rapist and sexed him to death with her very special lady parts, she's lost it. Instead, we've just watched her follow her creation around like a bloodhound puppy. Part of the problem here is the creation and another part is the amount of time we spend with Zoe.

Because she's become a side plot, we get a few minutes maximum with her each week; nothing could possibly happen in that time. However, when her interactions with other characters are so mundane, it starts to feel like perhaps we shouldn't even bother spending time on her story. It doesn't appear to be going anywhere of interest and Zoe doesn't really seem to have the fire to bring her out of these doldrums.

Of course that brings us to one very important possibility: Someone has to be the new Supreme, and from the looks of the set-up, the series wants it to be Zoe. She was the first one we met, then we were swiftly asked to forget her in favor of Madison (who we've just learned is not the Supreme — bummer that she died though). Now that the movie star is but a lifeless, rotting doll in Spalding's (Denis O'Hare) attic, might there be room for Zoe to step up (finally)? In her one moment of interaction with her fellow witches this week, she does manage to resume the top dog role as best she can when she tells them they need to find Madison instead of sitting around. It's a fleeting moment, but one that might indicate some piece of the future.

Then there's Misty Day (Lily Rabe), who most certainly was not introduced just to slap some mud on Kyle and do a Stevie Nicks twirl. She's important, even if we're not sure why just yet. But the most notable piece of her character at the moment is her need for interaction with other people. When Zoe retrieved Kyle from Misty's shack, Misty was hoping they'd stay. She's lonely out there and she's made a connection with Zoe. She also knows far more about witchcraft than the newbie witch and, unlike Cordelia, Misty's more than willing to use it. All these factors suggest that Misty is going to be more than a flash in Zoe's deadpan life. And a friendship between these two could certainly spice up the gray of Farmiga's character as she stands now.

We don't need Zoe upping the ante to some ridiculous degree; no hopping a broom and flying into the night, please. However, is it so much to ask that where Nan has a suitor, Queenie confronts a Minotaur, Cordelia has snake-vision sex, and Fiona and Madison have a showdown, can we find some room for Zoe to actually do something? It's not a good sign when Cordelia's murderous, cheating husband has a more contentious and mysterious story line than the girl who was set up to be our main squeeze.

I'm not giving up on AHS. Hopefully, next week's episode finally gives Zoe her character back. But until then, I'll be crossing my arms and waiting impatiently, because for all I can tell, Zoe's as flat as they come.