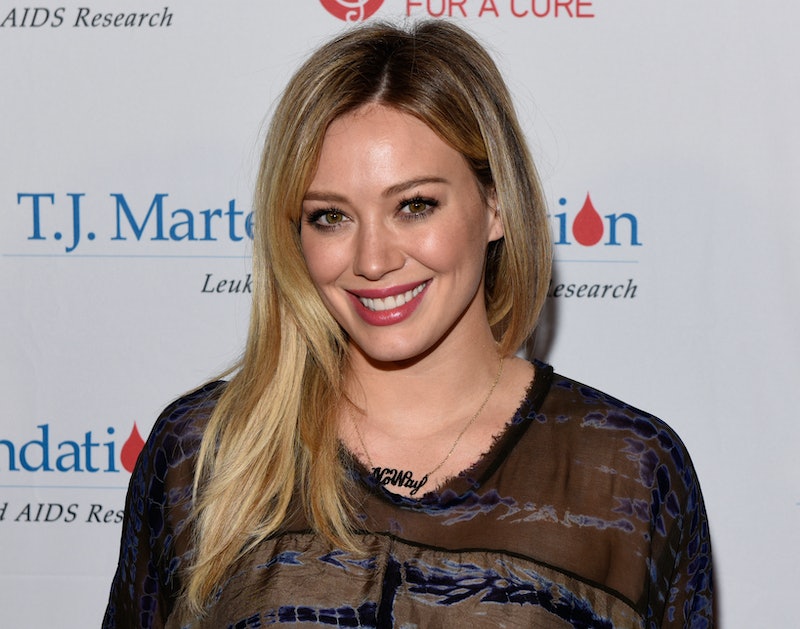 Stars, they're just like us! So, ICYMI, Disney golden girl Hilary Duff admitted she uses Tinder — and not only that, but girls got game: she reported that she's currently talking to nine different guys, and totally dating around. Get it, girl! But, between this revelation and that mini- Lizzie McGuire reunion with Duff, Lalaine (aka Lizzie's BFF Miranda) and Jake Thomas (aka, Lizzie's little brother Matt McGuire), I can't help but wonder: what would happen if Lizzie McGuire decided to join Tinder in 2015?

As a child of the '90s who had a television, I know enough about Lizzie McGuire to know that if Lizzie made it onto Tinder in 2015, she, like all of us, would learn many-a-heartwarming lesson about life, love, and modern dating... or she would humiliate herself entirely in an oh-so adorkable way, because that was just her thing and she was good at it. Either/or, to be honest.

Of course Lizzie herself would have to suffer many clumsy social (and probably physical) pitfalls to get to that point in her life. After all, when we left off with her in Italy (in the Lizzie McGuire Movie, that is) she was doing pretty well. So allow me to fill in the blanks, and fill in what would exactly happen for Lizzie McGuire to get on Tinder... and, most importantly, what would happen next. (This should totally be the plot of a Lizzie McGuire reunion, am I right?)

The year is 2015, and Lizzie is a faded star, finalizing a divorce with her high school sweetheart, Gordo. It's heart-wrenching, but what can you do? She had signed a contract with the Disney Channel after her triumphant stage show in Rome, starred in a few made-for-TV movies like "Middle School Band Camp!" and "My Mom's a Singing Plant Monster!" Suffice to say, she peaked at the age of 16, and panic-married Gordo a few years after.

So Lizzie moved back home, and contemplated with Miranda how she would re-enter the dating world. "Well, why don't we set up a Tinder account for you?" Miranda suggests. "Wow, Tinder? ALL the coolest kids are on there, do you really think I'd fit in?" Lizzie asks, eyes sparkling. "Yeah, and it totally works! Kate Sanders created a profile last year, and now she's engaged to a lawyer," Miranda says.

"OK, I'm totally ready to get back in on the dating game! Watch out, world, Lizzie McGuire's about to hit a home run!" Lizzie says to herself. Miranda looks around the room, and realizes she's having another schizo episode where she imagines herself as a pint-sized cartoon character. Lizzie must be off her meds again. Sigh.

After sifting through guys for hours, Lizzie comes across a familiar face. Is that... no way... could that be Ethan Craft? She swipes right with impressive speed, waiting for several painful moments to see if he responds... and he does! Her former crush, the one who left her hanging in the friend zone, thinks she's cute! Oh, happy day! They get to chatting, and Ethan talks about how he's a proud Taco Bell manager and part time Uber driver. Maybe it's not exactly how she imagined he'd be after graduation, but it's been so long since she dated... maybe she has to lower her standards now. They agree to meet for drinks.

Lizzie Learns What Tinder's Really About

Ethan was weirdly handsy during their late night bar encounter, but Lizzie felt like she was making progress, listening to him awkwardly try to talk and breathe at the same time. "I'm not Ethan Craft's type? Please, I'm EVERYONE'S type. Suck it, Gordo," she thinks to herself, smugly sipping her pomegranate-tini.

The next day she's at the airport, thinking she made so much progress in the last few years, thinking she'll return to LA to pick up her stuff a champion. Ethan sends her a quick message and she smirks to herself, realizing she's about to get the meaningful relationship with him that she's always dreamed of.