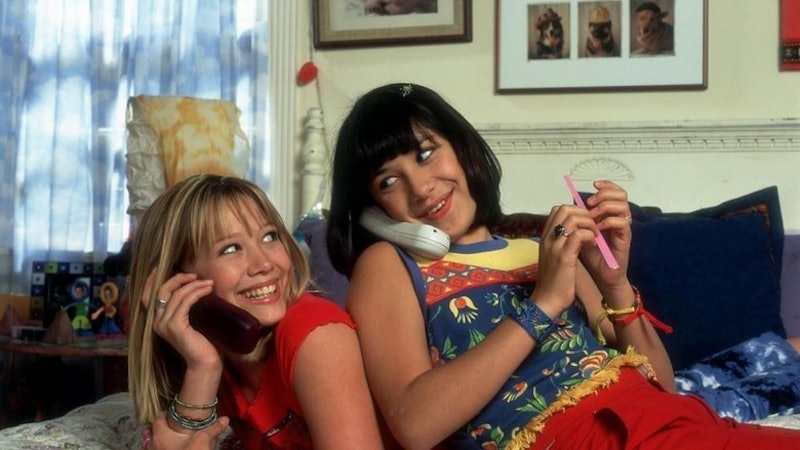 With '90s and early '00s nostalgia reaching an all time high with Girl Meets World and Fuller House, a magical unicorn of a reunion appeared on Instagram that may have finally pushed all millennials into a state of Nirvana: the Lizzie McGuire cast reunited for a night of bowling. It wasn't the whole cast, but the photo features three of the Disney show's key cast members — Hilary Duff (Lizzie herself), LaLaine (Lizzie's best friend Miranda), and Jake Thomas (Matt, Lizzie's little brother). Seeing the trio all grownup and clearly still in major like with each other was enough to warm the cockles of even the coldest of hearts.

As so often happens when cast members from our old favorite shows hang out, it is hard not to want more. Seeing Duff and LaLaine hugging makes me wonder if Lizzie and Miranda's friendship would have withstood the drama of high school and the distance that comes with college? Would Matt still be annoying or would he be too busy making short films? And, most importantly, whatever happened to Gordo (Adam Lamberg)?

There is only one way these questions will ever get answered outside the world of fan fiction — we need a Lizzie McGuire reunion movie. If you need more proof, I have seven, yes, seven, reasons why Disney needs to dust off the Lizzie McGuire franchise as soon as possible:

1. Just Look How Cute The Cast Is Together

These kids grew up nice. Somehow, the trio of Duff, LaLaine, and Thomas have retained their adorableness well into their 20s. As a coming of age comedy, Lizzie McGuire relied on its characters relatability and every kid status to carry the series. The good news is, Lizzie and her friends happen to be of a generation still working on the whole coming of age thing. As a viewer, I know I still want to see a young cast with chemistry grappling with everyday life problems in a way that is uplifting and less Girls-ian than what we tend to get. Those smiling faces up there look poised to give us what we want.

Due to scheduling conflicts, LaLaine did not appear in 2003's The Lizzie McGuire movie. This travesty means we never got to see Lizzie and Miranda take on Rome together. The last time we saw the besties hang out they were in middle school and rocking epic turn of the millennium hairstyles. As one of the best friendships to ever happen to tween TV, Lizzie and Miranda deserve a second act. How great would it be if they were sharing an apartment where they continued to work out the whole growing up thing together?

3. Lizzie and Matt's Grownup Sibling Dynamic Would be Fun to Watch

After years of Matt rocking the annoying little brother shtick, it would be interesting to see Lizzie and Matt navigating the world of adult sibling-hood. There is no doubt they would still drive each other crazy, but it would probably be in an adorable Monica and Ross kind of way. Plus, just take a look at Thomas in his Instagram picture, he is not an awkward little kid anymore, but he is a guy no one would mind seeing more of.

4. Because Gordo and Lizzie Should End Up Together

Once a shipper, always a shipper. I know it is not entirely realistic to think two kids who shared a kiss back in middle school would end up being together forever. I also don't care. Disney is all about making dreams come true and even if Lamberg isn't big in the acting scene anymore, surely he could be lured back to hang out with his old cast mates one more time.

Duff is once again having a moment. She is currently rocking her role on TV Land's Younger and holding her own alongside Sutton Foster. Duff has matured while maintaining the youthful spirit that made Lizzie a hero to so many young kids. Now would be the perfect time to capitalize on Duff's growing talent by having her infuse Lizzie with her newfound maturity and let Lizzie become our hero all over again.

Teen and tween shows have a parent problem these days, as in they never show any parents. Lizzie's mom and dad were always around to dispense advice and drive her nuts in equal measure. Her dad was a sweet guy, but it is her mom who was truly an inspiration. Mrs. Jo McGuire was there every step of the way as Lizzie angsted over growing up, and she would still be there to help Lizzie out today. Even better, as an adult Lizzie would have a stronger relationship with her mother and a better appreciation of what all Jo did for her.

7. Everyone Else Is Doing It

Everything old is new again, including Coach for some reason. Lizzie McGuire ushered in a new era for Disney Channel originals like Hannah Montana, Good Luck Charlie, and The Suite Life. Disney should give credit where credit is due and revisit its first major original comedy hit. Also, we really, really want to see Lizzie and friends again— make it happen, Disney!