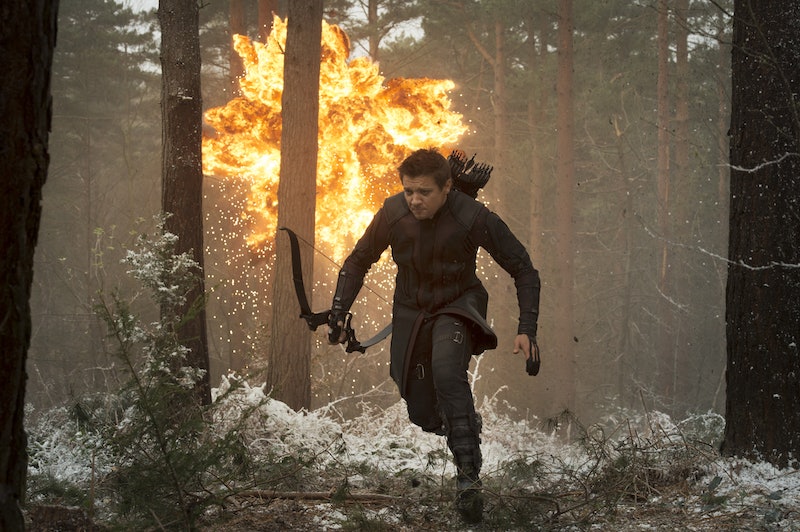 In the Marvel comics, the team called "The Avengers" was never a consistent roster of superheroes; characters came and went, joined and resigned, saved the day and died tragic deaths. But in the Marvel Cinematic Universe, The Avengers has been made up of the same six characters across two films now, including May's sure-to-be box office-smashing The Avengers: Age Of Ultron : Tony Stark (aka Iron Man), Steve Rogers (aka Captain America), Thor, Bruce Banner (aka the Hulk), Natasha Romanoff (aka Black Widow), and Clint Barton (aka Hawkeye). Of those six heroes, poor Hawkeye is decidedly the least developed — so director Joss Whedon decided to compensate for that in Ultron by giving the character a big secret. Which leads to the question: What exactly is Hawkeye hiding in The Avengers: Age of Ultron ?

In the midst of three genuinely super-powered individuals (and one genius playboy billionaire) Barton and Romanoff are the identifiably human components of The Avengers. But while Scarlett Johansson's Black Widow has gotten some focus — she was first introduced in 2010's Iron Man 2 and she totally stole last year's Captain America: The Winter Soldier from the film's titular hero — Hawkeye has remained a peripheral character at best. His only appearance in the MCU outside of the two Avengers films has been a cameo in 2011's Thor. Jeremy Renner's first major stint as the character in 2012's The Avengers relegated Hawkeye to a mindless zombie controlled by the villainous Loki for the majority of the runtime. It was an underwhelming debut, to say the least.

But hey — it's hard to give equal weight to six super-sized egos in one film (seven, counting Loki). Somebody was bound to get short stick. The solution? Give the underutilized Hawkeye a massive secret in the sequel, of course! So what is his secret?

Roughly halfway through the film, when the Avengers are reeling from an encounter with "miracle" twins Pietro and Wanda Maximoff (aka Quicksilver and Scarlet Witch) during which Wanda got in each of their heads with terrifying hallucinations, they head to a safe house to regroup. Plot twist! Turns out the farm is already home to Clint Barton's pregnant wife, and two small children.

That's right — Hawkeye has a family, a fact he's kept hidden even from his own teammates. (Except for Black Widow. Those two super-spies tell each other everything. I mean, they went through Budapest together — even if they remember it very differently.) Not only is this revelation a surprise, but it's a refreshing change of pace that the huge secret being hidden isn't a world-ending weapon/mission/MacGuffin, but rather something intimately personal. The sojourn to Barton's family farm is a much-needed human moment in a film overstuffed with CGI derring-do.

Of course, this twist is also what leads Hawkeye to resign from the Avengers at the end of Ultron, so fans may end up feeling rather conflicted about this unexpected turn of events. But don't feel too bad. Barton may be off the team (for now), but he'll turn up soon — Renner is set to co-star in next year's Captain America: Civil War... alongside every MCU superhero and their mothers.