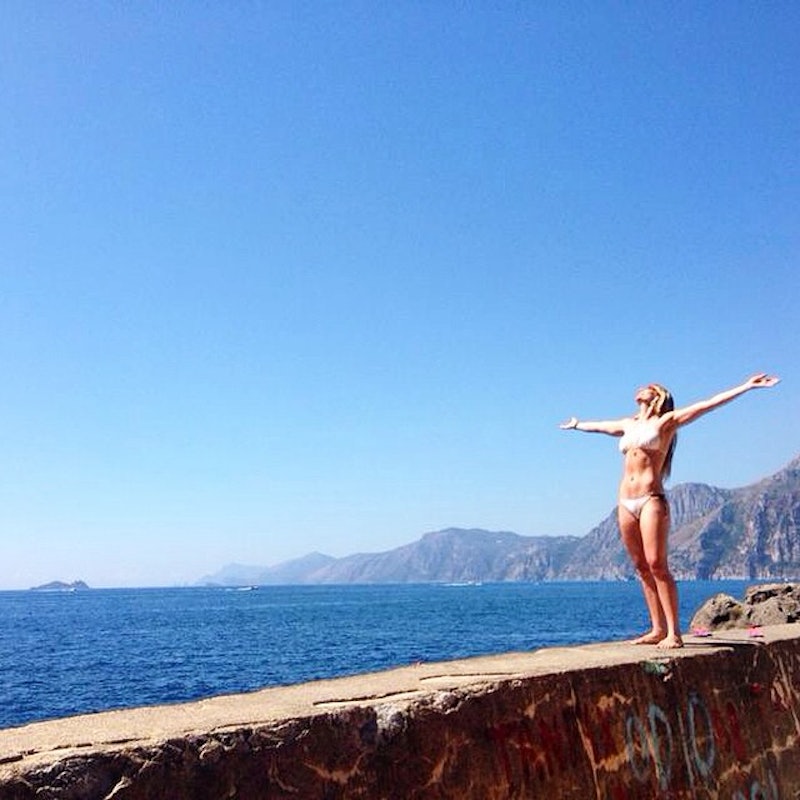 Women who unconditionally love their bodies cut the line. They prove what people who spend their days fighting, paying, working, starving themselves to be different most fear: that being thinner, or prettier, or closer to some other dream ideal, does not an unconditionally happy person make.

It's a little counterintuitive, but the people who most desperately want to change their bodies usually aren't doing so because they're that convinced they're that unattractive – it more often has to do with not being able to understand why the people who were 'supposed' to love them... don't. Instead of facing the the unimaginable – that the reason for this is something about who they inherently are – they fixate on something simpler, obvious, controllable: how they appear.

Women who love their bodies dismantle the safety net on which many people rely and expose what they already know to be true.

We know that our bodies are just the vessels for who we really are. We know that trying to change them doesn't actually bring us any closer to real happiness. We know that appearances aren't what matter most; They're illusions; temporary, un-lasting, unstable things on which to build real self-esteem or relationships or a life.

But still, we wake up and head to the gym at 6 AM because we want to be "healthy." Funny, how preoccupied we are with physical health — the kind of "health" that will yield change we can see — and yet are noticeably less concerned with the other kinds of health, like the actual health of our communities and populations... You know, the things that don't necessarily change the shape of our thighs, but ultimately define the quality of our lives. We aren't taught to care about these things nearly as fervently.

But the women who love their bodies do.

They care more about who they are than how they look. What they do over what they wear. They care about something more than just being skinny, or pretty (even if it's just their own peace of mind) and that's what's most threatening of all: That they have the capacity within them to look into their depths and heal what's driving them to fix the outside, as though its an antidote for everything else.

This, and the other reasons people ridicule, judge and shame the women who love their bodies unconditionally:

It dismantles the standards by which worth is measured

If bodies that are considered physically imperfect by conventional (limiting, awful, unfair, dumb) standards are just as deserving of giving and receiving love and affection and care and the like, it renders the necessity to achieve something "better" more or less obsolete. There's no reason to be a slave to beauty standards if you already love your body. This is true of people who somewhere, subconsciously believe that attaining a certain physical form will in some way change their lives, and make them worthy. They refuse to face what it is makes them feel invalidated in the first place, and somebody loving their body subconsciously forces them to do so–hence the backlash.

They need to justify the time, money and effort they put into constantly changing how they look

When you aren't constantly fixated on changing your body, it's an affront to people who are. It's that simple. Your rejection of all the work that goes into hating one's body invalidates their obsession with doing so. "But it's healthy! But it's important! But I feel better!" are things you'll hear people say all the time, and it's not that those statements are never true, or that they're always uttered people self-hating people, just that often, they're disingenuous. People feel better because they look better. Health is the guise of positivity under which they can justify themselves.

Because loving your body enough to not keep it in a constant state of stress and tension? That's healthier. Finding a way to move your body and nourish your being and heart and spirit with food from the earth? That's more important. Learning the difference between a workout that feels good and the idea that you're slowly on your way to changing your body—that's what it means to feel the difference.

These are the things that women who love their bodies know, and people who can't quite accept themselves as they are (and so exist in a state of perpetually desiring and trying to create change) don't know, or refuse to acknowledge. Seeing how health and acceptance and self-love can be achieved without all the extraneous effort? It dismantles the foundation on which they've begun to feel okay about themselves.

TL;DR: By tearing down a woman who accepts herself the way she is, people are effectively justifying why they behave the way they do.

They’re deeply envious of anyone having the ability to love themselves, so they try to point out reasons why those people shouldn't, as opposed to confronting the reasons why they don't

Ah, the good ol' green eyed monster. I don't pull the "jealously" card very often, but it's very appropriate here: The people who are most unhappy about women who proudly flaunt who and what they are desperately want to accept themselves, but for whatever reason feel as though they cannot. It is that resistance that they project onto people who have done the thing they've convinced themselves they cannot do. This is the nature of jealousy. You don't feel envious over the things you in some way wish or know you could have... and yet, at the same time, feel you cannot personally achieve due to some kind of lack or resistance.

They feel you haven't “earned” the “right” to love your body, so you don't "deserve" to

Because they have, or are in the process of, changing their bodies as a means to learning to love them, they create the belief that you must earn the right to love who you are, and proudly inhabit the body in which you exist. When women go ahead and love themselves just as they are, today, in this moment, in whatever form they are, they once again surpass the system insecure people put in place to make themselves feel better.

It's a roundabout way to get at it, but it comes down to the same point: We all have our insecurities. Some people try to quell them under the guise of health, some people try to punish other people the way they internally scold themselves, and some others choose to liberate themselves from the never-ending brainwash of "what it means to have a worthwhile body." It is to these people which we should most be looking up, and it is for them that we should be rising and saying what our mothers said in middle school: "They're just jealous... don't let 'em get ya down."