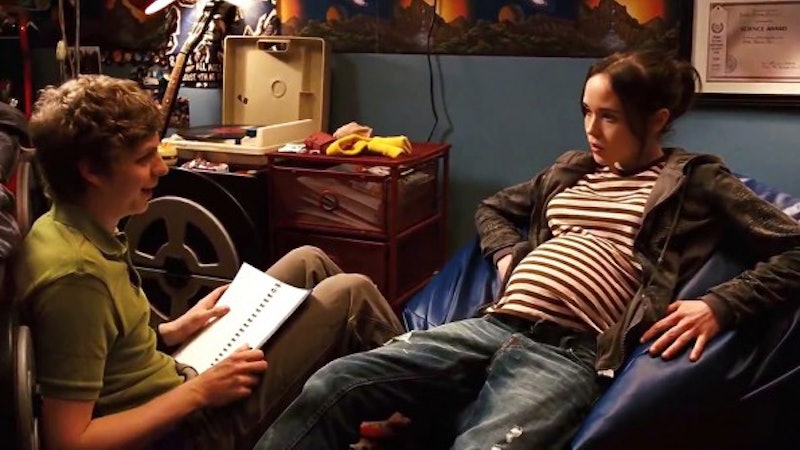 When I was a teenager, I heard that you couldn’t get pregnant the first time you had sex. Although I was still a couple of years away from losing my virginity, I felt relieved to hear that you got at least one free pass before you had to start worrying about accidental pregnancy. But then a friend of mine, who was a couple years older, got pregnant the very first time she had sex. Apparently, the lessons about how you get pregnant I'd heard in the hallways of my high school were less than accurate. Shocking, I know.

Unfortunately, I'm not the only one out there who got some bad intel on how to avoid pregnancy. From having your boyfriend drink certain sodas before sex, to douching with other sodas after sex, to jumping up and down after doing it, people believe a lot of wild myths about how you can avoid getting pregnant. But while some of these myths are positively kooky — I mean, if you honestly believe soda is going to have any bearing on your partner’s sperm count, then maybe you shouldn’t be having sex at all, because wow — some of them might seem like they actually make some logical sense, given the faint grasp that most of us have on the actual workings of the human body.

But if you're a heterosexual woman who doesn't want to get pregnant, there aren't really any special loopholes — you can use birth control, you can limit yourself to sperm-free sexual activities, or you can abstain. But if anyone tells you that any of the 11 myths below about when you can and can't get pregnant are true, don't listen to them — they might start extolling the contraceptive virtues of carbonated beverages next.

1. If You're On Your Period

Although the likelihood is small (finding the exact statistical numbers proved difficult, to say the least), women can get pregnant on their period. If you ovulate early because your cycle is shorter cycle than the typical 28 to 30 days, sex at the end of your period while you’re still bleeding could possibly lead you to conceive four to five day later — because sperm can live inside you for up to FIVE DAYS.

So if you want to have sex during your period, but are not on the Pill, you definitely want to use a condom. Condom use during this time is also important because you cervix is open, which makes sexually transmitted infection more likely.

2. If It's The Week After Your Period

Once your period ends, your cycle begins its fertile stage. For women who have a typical cycle of 28 to 30 days, their fertility window usually runs from day 11 and day 21 of their cycle. Taking into account the five-day shelf life of sperm once it is inside you, having unprotected sex the week after your period could definitely lead to conception if there are any swimmers lingering around once you move into that fertility window.

One word: pre-ejaculate. Before a man fully ejaculates, there is a bit of fluid that seeps out of his penis first; that fluid is called pre-ejaculate (or pre-cum). And yes, it contains sperm.

The sperm’s sole purpose in life is to hunt down an egg and fertilize it. So while your guy may not have blown his full, uh, load, it doesn’t mean that the sperm that have been released during pre-ejaculation are somehow subpar and not willing to do their work. If anything, being first to the gate, they might be go-getters, and even more hellbent on finding an egg.

Depending on a man's self-knowledge regarding how close he can get to the brink of climax before actually ejaculating, pulling out is 73 to 96 percent effective. Odds you probably don't want to take.

When women breastfeed, hormones that cause ovulation to cease are released into the body. Although that may be the case, it’s not a full-proof birth control method, especially if you don’t nurse on a regular basis.

According to lactation experts, sticking to the lactational amenorrhea is 98 percent effective in preventing pregnancy. But once you start to ease up on the regular breastfeeding, those hormones that have been suppressing ovulation slow down on their duty, and you become fertile again.

5. If You Douche After Sex

While some unreliable high school friends may have told you that if douche with something after sex, you'll flush out the sperm, in reality, it will not prevent pregnancy. Not only will it not stop you from getting pregnant, but it also increases the risk of ectopic pregnancy (one that implants outside the uterus) by 76 percent.

In general, douching isn't doing your vagina any favors. If anything, it disrupts the natural order of things and has been linked to pelvic inflammatory disease, vaginal infections, and even cervical cancer.

True story: Your vagina and urinary tract are two separate entities with two separate openings. How could urine have anything to do with what's going on in the vagina? It doesn't, so peeing after sex won't prevent pregnancy.

7. If You Have Sex In the Water

No matter what body of water is your favorite place to get it on ― be it ocean, lake, or your cousin's hot tub ― having sex in water will not prevent pregnancy.

According to WebMD, in certain water temperatures, sperm can survive outside the man’s body for a several minutes. Which means water, in some cases, is just giving that sperm a longer life and more time to do its thing.

8. If You Have Sex Standing Up

Although it might boggle the mind to think that sperm can swim upstream to get to the goods, the fact is they do. No joke. In fact, no position is “safer” than the next; if that sperm is dropped off where it’s supposed to be ― in your vagina ― and you’re fertile, it’s not going to magically slide downward and out. So yes, you can get pregnant standing up, on top, hanging from the ceiling, or in any other position.

Fun fact: This is why jumping up and down to prevent pregnancy doesn't work either, but it will give you a lovely post-sex workout.

9. If The Woman Doesn’t Orgasm

Some studies done in the 1990s tried to prove that orgasms aided in conception because of the way a woman's vagina responds during an orgasm, but the scientists really didn’t come up with anything concrete to support their theories.

Famous Harvard evolutionist Stephen Jay Gould was adamant that female orgasms and conception don't go hand-in-hand. Orgasms are strictly for pleasure and their relation to getting a woman pregnant is null and void.

10. If You Have A Tilted Uterus

11. If You Have A Thyroid Problem

A thyroid problem means there’s either too much or too little of your thyroid hormone being released into the body, which can interrupt the menstrual cycle. It will not, however, prevent pregnancy. It may make conceiving difficult for some women, but that depends on the details of your particular thyroid problem — so count on a condom to protect you, not your thyroid.