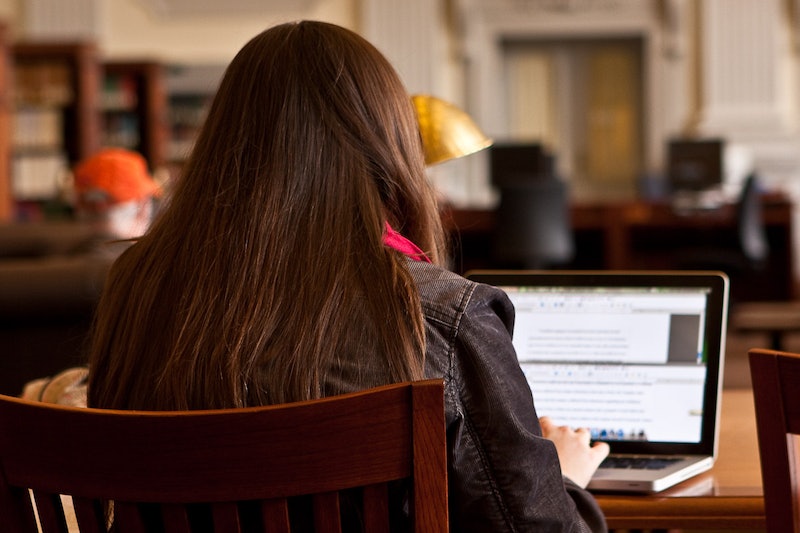 On Facebook last week, users were responding to two newsworthy events: SCOTUS listening to arguments for and against marriage equality (the ruling, expected in June, could legalize gay marriage in all 50 states); and peaceful protests in Baltimore over Freddie Gray’s death that had devolved into riots. In short, it was a great week for bigotry and racism on Facebook — which makes this week a great week to talk about how to respond to it.

People usually choose one of the following four ways to respond to bigotry and/or racism on Facebook:

B. Condemn it aggressively (via comments)

C. Condemn it passively (via the “unfriend” option)

I choose option “D,” partly because it’s in my nature to try and understand why people think the way they do, and partly because I hope that in understanding, I’ll figure out a way to change things. I’ll confess, though: weeks like this past one make me battle-weary. And whenever I’m battle-weary, it’s useful to remember the moment I committed myself to option “D” in the first place.

On Oct. 11, 2010, I participated in HRC’s National Coming Out Day for the first time by posting this as my status:

Honestly? I didn’t think it would cause the upset it did, because I had a distance of over a decade from the rural, uber-conservative South Carolina town in which I grew up. But that’s the thing about Facebook: it is — among other, better things — a virtual high school reunion every day.

Several of my former classmates let loose with a flurry of anti-gay comments: Bible verses wielded as weapons, stripped of all historical and cultural context; comparisons between gay love and choose-your-crime (pedophilia, bestiality, etc.); and exclamations of disgust. Basically, I found myself inadvertently hosting an anti-gay rally on my Facebook page.

Panicked, I thought of all my LGBTQ Facebook friends: a former student, who came out his freshman year; a colleague, who brought me flowers from his garden when I was a lowly graduate student; a younger cousin, still living in my hometown.

My finger was poised over the DELETE key, preparing for the protective strike, when I realized: my LGBTQ friends have already seen those comments on countless Facebook pages. They've already heard those comments, maybe even from people they love. By simply living their lives, they make themselves vulnerable to the ugliness of discrimination every day.

So instead of deleting, I decided, instead, to engage with the commenters, with one caveat: “I solemnly swear to stay on my own page.” I know how I feel when I get trolled, and I won’t do that to others. But I’ll respond loudly and swiftly when challenged on my own page.

I gave the commenters the benefit of the doubt by telling myself that they were only parroting what they had been taught. So I improvised, making due with (theology professor!) David Lose's "Is the Bible a Reliable Moral Guide"? and (progressive pastor!) Roger Ray's "The Canon within the Canon" and (Jewish Studies scholar!) Jay Michaelson's "Who Are the Real Sodomites"? — articles (and a video!) that offer eloquent rebuttals to the conservative Christian argument against gay marriage.

If given another choice, I was confident that anyone would choose the path of least discrimination.

I can’t say that no one changed their mind, because maybe (hopefully) someone reading did. But the bigoted commenters remained loud and proud. I decided to use the DELETE key in the end, despite my best efforts.

Standing up to bigotry on Facebook is more art than science. But it's useful to remember that bigots against the LGBTQ community and racists against the black community have these things in common: distance, fear, and an inability to separate the human from the stereotype (and to empathize accordingly).

Looking at comments like these last week, I was reminded of a recent train trip when my husband and I ate breakfast with a 65-year-old black man named Gus [name changed]. We ended up together because Amtrak only serves to full tables in the dining car and will match up customers as they arrive. Gus was wary at first — loathe to remove his earbuds even — but I was tired of talking only to my husband and was determined to draw him out.

He began to tell us about his life: How he grew up in the projects; how he dealt drugs; how he was shot when a deal "went bad"; how he was arrested. How he then went to prison, where he realized he enjoyed learning (once he finally had a place and time to do it). How he earned his welding certificate there, and had just retired from a shipyard, his first job after prison. How he was on his way to visit his grandchildren.

I’ll never forget what he said as we got up to leave: “I don’t tell most people that — especially white people.”

After reading Facebook this past week, I think I understand both his reasoning and also the tragedy of those missed conversations.

Commenters dismiss Freddie Gray as a criminal, someone who dealt drugs and who therefore doesn't matter — despite the fact that he was illegally arrested when killed; and despite the face that his brother-in-law, Juan Grant, explained why Gray dealt drugs in the first place: "When people come to buy narcotics or gamble or anything and they put their money in your hand, what makes you so bad? He had responsibilities. Responsibilities don't stop because you don't have a job."

Many of Freddie Gray's detractors are no doubt fans of the hit show Breaking Bad and able to empathize with Walter White's decision to provide for his family by selling drugs. Freddie Gray deserves the same empathy fans afford the fictional Walter White, and he deserved to be able to finish his story, as Gus has — to be on an Amtrak train, at age 65, en route to see his grandchildren.

When we use our voices and our stories to change one mind about one issue (whether that’s marriage or racial equality), we’ve bent the arc of the moral universe towards justice not only for that one community but for us all — and we become that much more likely to bend it again.

Sometimes, it feels futile. But make no mistake: it matters.

More like this
The 19 Best Tweets & Memes About Bisexual Awareness Week
By Lexi Inks
An Honest Review of MeUndies Boxers, According To A Non-Binary Person
By Megan Lasher
Pro Footballer Zander Murray Is "Blown Away" By Support After Coming Out
By Sam Ramsden
Chris Kaba's Family Continue Fight For Justice After Viewing Police Bodycam Footage
By Sophie McEvoy
Get Even More From Bustle — Sign Up For The Newsletter