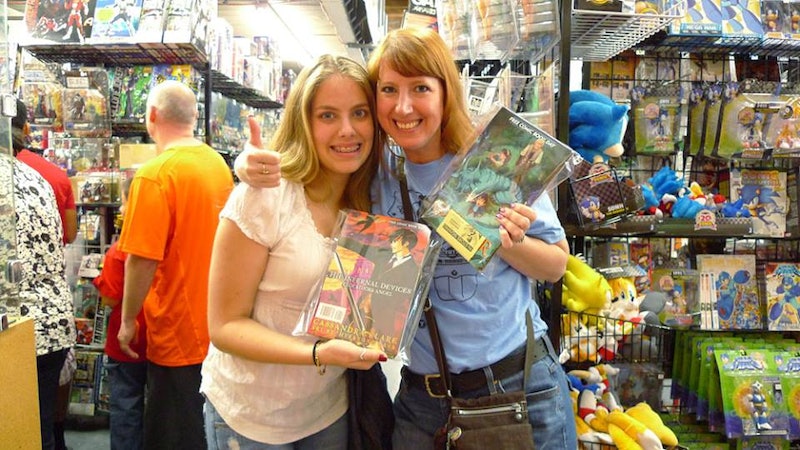 Saturday marks one of the biggest holidays in the comic book industry: Free Comic Book Day. This is not a drill; yes, there are really free comic books out there in the world for you to take... for free. If you're into comics, you already know that this is like Christmas morning for you. If you're not into comics, what better day could there be to try them out for free?

As a kickoff to Children's Book Week, the annual event is organized by Diamond Comics Distributors, which partners with local retailers and publishers to hand out more than 2 million copies of comic books. In particular, Free Comic Book Day hopes to draw in young kids to reading and literacy with comics, but it also hopes to boost awareness and fandom for comics in segments of the population that may not think comics are "for them." Growing bigger and bigger since 2001, it's now the biggest and most successful comics promotions ever.

Three-time Newbery Medal honoree Jennifer L. Holm is on the board of the Comic Book Legal Defense fund, and she spoke out about what this day means for her:

When I was a child, my love of reading started with comic books. Today, as a comics creator myself, and as a mom, I'm excited by how much extraordinary storytelling is happening for young people in comics. Children's Book Week is a wonderful time for people to come together and share the love of reading comics with kids everywhere!

Now especially, as women are more often taking front-and-center in the comic book universe, women readers have even more access the comics. If you're hesitant, here are five incredible women-centered comic books you should go in search of to celebrate Free Comic Book Day.

No-brainer. If you're into the superhero comic universe, you need Aaron and Dauterman's installment of Marvel's Thor, where a woman picks up the hammer and steps into the role. Though there was some heavy whining and complaining from the misogynists of the world, this version of Thor is far outselling any male-centered Thor comic, so there.

If you've read This One Summer , you're probably already running to get anything else Tamaki has worked on. Luckily, SuperMutant Magic Academy is a featured comic for Free Comic Book Day, so you should be able to get your hands on it. The titular academy is a training ground for mutants and witches, but they're far more concerned with regular high school issues than the supernatural. The comic is sharp and funny, with the right amount of Daria-like teenage ennui.

Alana is one bad-ass heroine. Saga is narrated by Hazel, who actually isn't born until later in the series. She's the daughter of the Romeo and Juliet of this universe (though, I promise, much cooler), Alana and Marko who are from warring planets. The two must hide from officials from both planets, and Alana proves that she's as tough as anyone in the world, especially when it comes to her family's survival.

My So-Called Secret Identity, created by Will Brooker, art by Suze Shore and Sarah Zaidan, and others

My So-Called Secret Identity is free every day, available as an online comic. Brooker created the series as an antidote to the usual, pin-up-style depictions of women in comic books. The series follows Ph.D. student Cat Daniels whose only superpower is being super smart. She lives in a quasi-Gotham City called Gloria City alongside her policeman father.

Boom! Studios editor Shannon Watters called upon Ellis to come up with a girl-centric comic book idea. They together figured out that they wanted to set it at summer camp, and after bringing on writing and illustration talent, Lumberjanes was born. Five members of the Miss Quinzella Thiskwin Penniquiqul Thistle Crumpet's Camp for Hardcore Lady Types (amazing) see an old woman transforming into a bear, and they set out on an adventure to figure out the secrets of the woodland creatures and the camp itself.