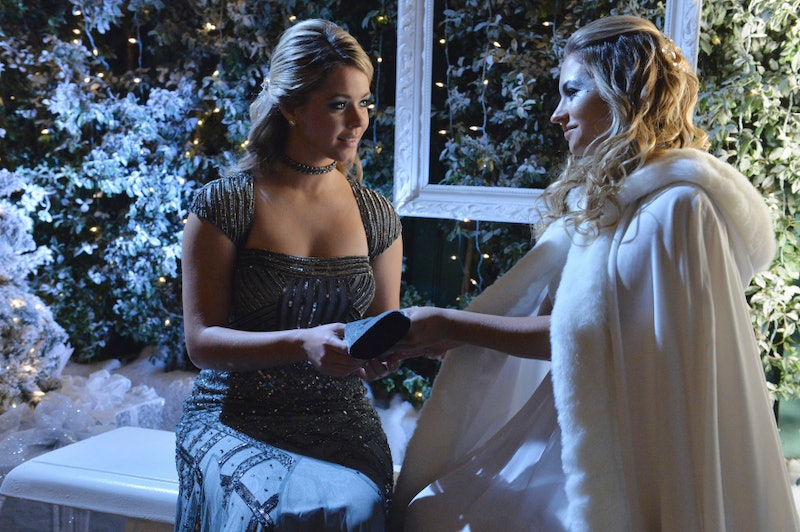 There's been a lot said about Charles DiLaurentis, if only because we know so little about him. Perhaps the most frustrating part about Big A's true identity is that what we think we know might not even be what we actually do know. The biggest theory so far is that Charles is Jason's twin brother, aka Alison's older half-brother, which would make sense considering the home videos found in Charles scary (but surprisingly sad) lair. But while that seems surprisingly logical, there's this whole other side of Charles' personality that is giving me pause, and that's his bizarre fascination with Ali. Could Charles be in love with Ali and not her biological brother at all? It certainly would make their relationship a lot less (if still very) creepy.

There are a few clues that hint that Charles has more than brotherly feelings towards Ali. Since I don't think Pretty Little Liars is going to make Ali's actual brother fall in love with her (at least, dear God, I hope not) that would mean that Charles couldn't be Ali's brother — at least biologically speaking. Some options could be that Ali was conceived using an egg donor (which wouldn't make her technically related to Charles), Ali or Charles was adopted, or, lastly, that we were totally wrong about Charles being a real "DiLaurentis" and instead was just a friend of Jason's. As for that anagram that first revealed the name Charles DiLaurentis? Well, if Charles was in love with Ali, maybe he wanted to see what it would be like to take her last name — as her husband. (Again... very creepy.)

Now, onto the things that make it seem like Charles in wildly in love with Ali. For one thing, the prom — though it was based on the 2006 prom that Jason attended, Ali (well, Mona dressed like Ali) won Prom Queen. Why would Ali attend a prom in 2006? She'd have to go as someone's date — could Charles have wanted her to be his date? We can imagine that Charles never made it to this prom — having Ali there could be his way of making his prom perfect. Not only did he get to attend, but he got to be on the arm of the Prom Queen.

Let's consider the codename that Charles used in Season 5 — Varjak. Paul Varjak is a character from Breakfast At Tiffany's who romances Holly Golightly, the character that Ali is often likened to throughout the series, specifically by Ezra, whom Ali has a brief romance with. Not exactly a nickname that screams "familial relationship," right?

We might not be able to fully unravel Charles' weird fascination with Ali for quite some time, but something here is off. The intense love/loathing that Charles has for Ali just doesn't seem brotherly — there just has to be something else going on here that is making Charles behave the way he does, right? Now we'll just have to wait until Season 6 to figure out what that could be.