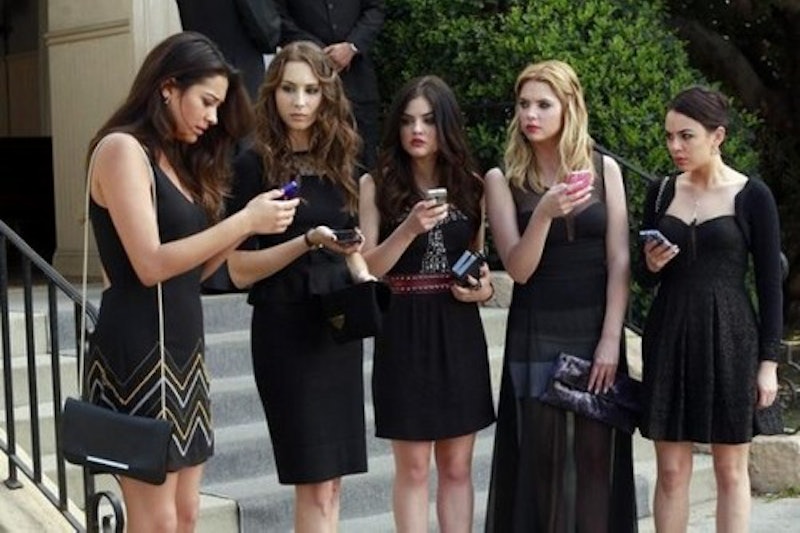 Season 6 of Pretty Little Liars won't just be delivering the thrills: The series looks like it is going to get downright horrifying in the best possible way. More importantly, the promo for Season 6 of PLL seemingly promises to answer questions we've been waiting on since 2010, primarily the revelation of A's identity — or at least, the complete revelation of A's identity. In the Season 5 finale, we finally learned that A was actually Jason's twin (what?!), Charles DiLaurentis. Then again, with PLL being PLL, we've all come to know that this show offers up more twists — albeit, confusion — per episode than the entire series of Lost, which is saying a lot, considering every installment of Lost led me to shouting the phrase "What just happened?" to no one in particular when it came time for the credits to roll.

Back to the spine-tingling eeriness of the Season 6 promo: Whether or not all our questions will be answered (and there is a smorgasbord of questions to be answered), PLL appears to be continuing its foray into delightfully horrifying territory by betraying elements we've seen in box office hits like Saw. The Liars appear to be continuing their exploration of the dollhouse, with Charles/A serving as a macabre marionette to all of the frights that said house has to offer. Let's take a look at the ways Season 6 is going to bring terror to PLL in the most addictive way possible.

Mona is alive! Hooray! We were beyond relieved to learn that Mona had not actually met her demise, but it appears that she continues to find herself in peril. In the promo for Season 6, Mona is seen rocking back and forth in entrapment as her quivering rendition of the nursery rhyme, "Hush, Little Baby," serves as the promo's macabre soundtrack.

Furthermore, Mona Is In Serious Danger

Eek! It doesn't take long for us to see the reveal of a sinister message, stating "He's Going To Kill Me" signed with "M," which I can only assume stands for "Mona." Then again, this show is so full of twists and turns I wouldn't be surprised if that "M" belonged to a new character entirely.

There is someone lurking behind the Liars! I'm assuming it's Charles/A, but who even knows at this point? Either way, this image foreshadows something supremely creepy is in store.

There Will Be Screaming...Lots of Screaming

Even during a seemingly innocuous snippet from the Season 6 promo, we hear a voice swell and scream, "Oh no! No! No!" I'd wager a guess that there are plenty more screams in store for our PLL crew.

A Menace Will Be in Control

The Season 6 promo promises some answers with a capitol "A." Still, the unmasking of Charles/A doesn't look like it's going to quell his reign of terror. I hope you all plan to watch this season with the lights on! I'm getting goosebumps just thinking about it.