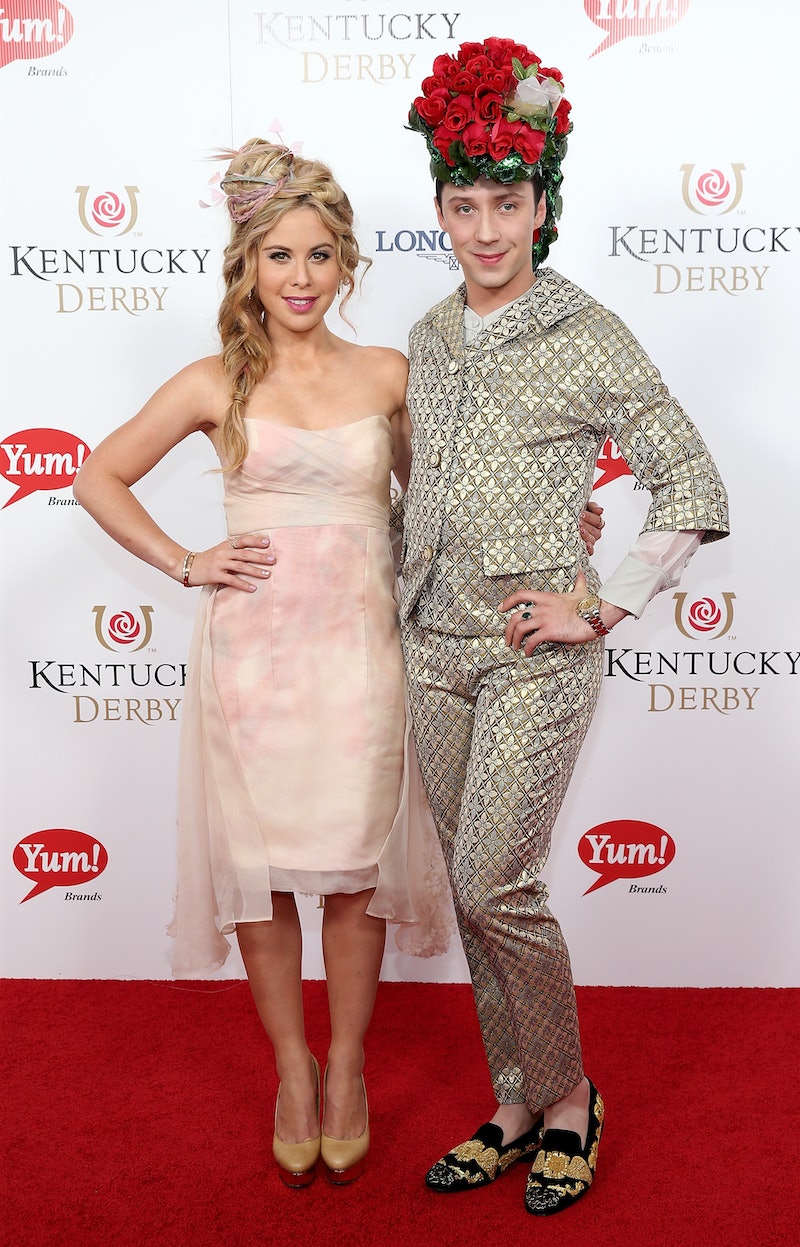 It's that time of year again: the worldwide phenomenon — often touted as the "most exciting two minutes in sports" — known as The Kentucky Derby. Although the main action of said event is confined to two minutes, there is so much more to this phenomenon than the races. The Derby provides us with several staples, such as: social gatherings centered on the races; donning of the most heavily ornamented hats imaginable, and an excuse to drink at noon. Among other things, this year's Derby marks the second appearance of figure skating duo Johnny Weir and Tara Lipinski as commentators. These two first garnered fame with their deft skills displayed in ice skating rinks, and since becoming commentators and TV personas, both have shown that their wit and banter is just as sharp as cutting a figure eight.

Donning their best Derby garb (did you see Weir's rose and mint julep headpiece? Fierce!), Weir and Lipinski didn't disappoint during their second go-round at the Derby, dishing on the best fashion trends for the event and slaying with their witty banter while interviewing various celebs. My personal favorite moment was when Weir noted that the sunny yellow color trend at the Derby signaled the "death of winter" — #lulz. In the midst of my elation over seeing these two bring joy to my television screen, I couldn't help but wonder about the other events these two could provide some sensational commentary on. Hmm...

The Derby isn't the only place celebrities enjoy pushing the envelope with their fashions. I would love to see Weir and Lipinski slay on the next Grammy Awards red carpet.

I've never been an avid fan of golf, but Weir and Lipinski would be definite cause for my tuning in.

Any Event Involving The Royals

The Derby isn't the only home to phenomenal headgear. The Royals are known for donning some of the best hats around, and there's no doubt Weir and Lipinski would arrive fully equipped.

The Academy of Country Music Awards

I would love, love, love to see some commentary and banter between Weir, Lipinski, and veteran ACM hosts Luke Bryan and Blake Shelton — it would be like a quintet of quips!

With our beloved Amy Poehler and Tina Fey retired from their hosting gig, we need some supreme commentators to bring on the wit during next year's Golden Globes.

Do I even need to explain this one? This event is designed for wit and banter, and no one could dominate red carpet commentary like Weir and Lipinski.

Come on, guys, I'm turning 30 this year! If that doesn't call for some sweet commentating, I don't know what does! In fact, wouldn't it be amazing if we could have Weir and Lipinski commentating on all our respective birthday soirees? Come to think of it, I don't think there is a single event that couldn't be enhanced by this dynamic duo.