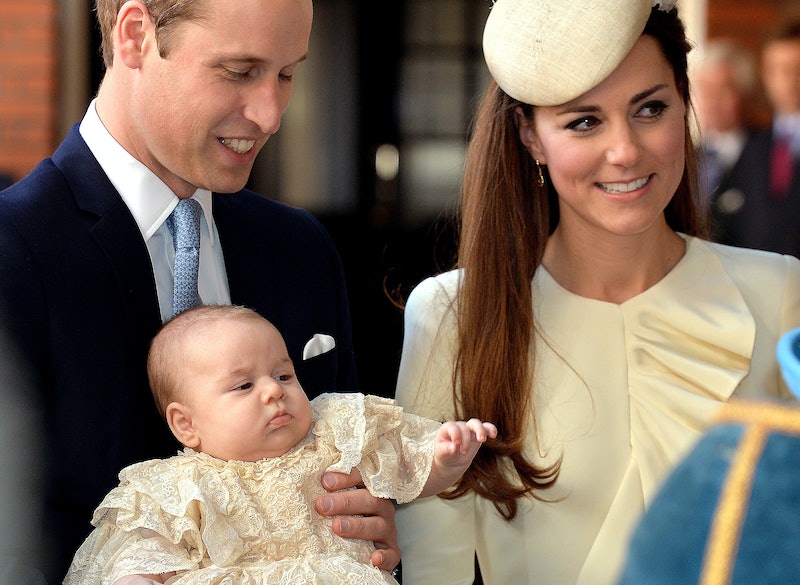 The fanfare over news that Prince William and Kate Middleton welcomed a baby girl on Saturday, May 2, had already reached exponential heights. Then, Middleton — with the Duke of Cambridge by her side, of course — made her first post-baby appearance on the steps of St. Mary's hospital in west London, and hearts across the globe literally exploded at the site of the Duke and Duchess's adorable new bundle! Swaddled and sleeping, the newborn Princess of Cambridge was the quintessence of perfection, and her mother — glowing and beaming with joy — looked pretty spectacular herself! Scores of comments were posted to Twitter praising Middleton's flawless appearance, as she appeared on the steps of St. Mary's in a beautiful yellow-and-white dress, heels (yes, heels) a gorgeously flowing coif, and picture-perfect makeup. The Duke of Cambridge looked quite dapper himself, dressed in a cerulean blue sweater and black slacks. There's no doubt about it: Duke, Duchess, and the royal baby made for quite the lovely family photo.

One question remains: who does the royal baby resemble the most — Middleton or Prince William? As we've watched Prince George (i.e., the Duke and Duchess's first royal baby, and now a new big brother) grow over nearly two years, he — in my humble opinion — has definitely come to resemble Prince William a bit more than Middleton. We will surely be seeing plenty more of Cambridge's newest princess as she grows (they grow up so fast!), but for now let's do a few comparisons based on the undeniably adorable pictures we've seen so far.

Here's a baby picture of Prince William with his mother, the late and great Princess Diana:

For the sake of preciousness, let's take a look at a couple more. Here we have the new royal baby:

OK, here we have Prince William during his toddler years during the welcoming of his younger brother, Prince Harry:

Even at two years old, the Duke of Cambridge had that regal wave down pat — impressive!

Once again, let's revel in a beyond cute picture of the royal baby:

Here is a lovely picture of Middleton as a toddler:

OK, one more squee-inducing picture of the royal baby:

And one final childhood picture of Middleton:

This is most assuredly a touch call. If I had to make a judgment, I would say that the new royal baby has just a slightly greater semblance to Middleton than Prince William. You may disagree, but I think there's one thing none of us can deny: Prince William and Middleton's new little princess is the epitome of preciousness. Congrats to both proud parents!