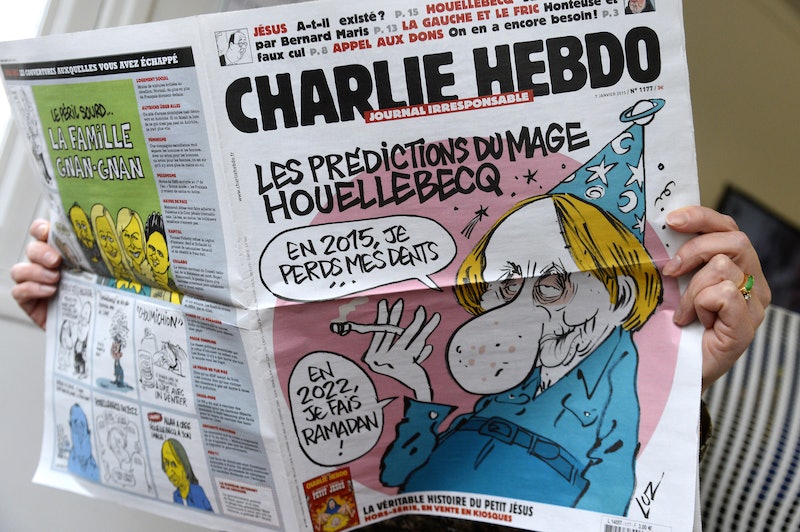 PEN American’s decision to award Charlie Hebdo, the offices of which were attacked in January, has caused controversy in the literary world. The writers who withdrew from the gala stated that, in honoring the French magazine, “PEN is not simply conveying support for freedom of expression, but also valorizing selectively offensive material,” referring to the magazine’s infamous cartoons.

In an email to The Associated Press, Neil Gaiman wrote:

I was honored to be invited to host a table. The Charlie Hebdo cartoonists are getting an award for courage: They continued putting out their magazine after the offices were firebombed, and the survivors have continued following the murders.

Other publications and public figures are also speaking out in defense of the award going to Charlie Hebdo. In a column for the The Economist , the writer J.F. writes, “PEN is not giving Charlie Hebdo the ‘We Like Your Cartoons’ award, or the ‘Most Incisive Social Commentary’ award or the ‘We Agree with Everything You Stand For’ award. The Goodale prize is for courage.”

And in a letter to PEN, which she posted on Facebook yesterday, the journalist Christiane Amanpour refutes the “PEN 6”’s claims that Charlie Hebdo’s satirical cartoons specifically targets French Muslims.

…a precise examination of their satire shows they are actually targeting the absurdity, violence, misogyny, hatred and intolerance of global Islamic extremism. You can like or dislike what Charlie Hebdo does, find it funny or not, but to suggest that somehow they were inciting hatred and violence and ….not so subtle subtext…"oh well, the cartoonists were asking for it then", is categorically wrongheaded, churlish and morally repugnant.

Andrew Solomon and Suzanne Nossel, PEN American's president and executive director respectively, wrote an Op-Ed in Friday's New York Times explaining the organization's decision to honor Charlie Hebdo on May 5. "The heated debate," they write, "...demonstrates that in an open society, well-intentioned people with shared values can interpret and weigh principles differently." That's the root of the debate, but it also proves "the relevance of groups devoted to freedom of expression."

More like this
The 20 Best Audiobooks To Fall Asleep To
By Aoife Hanna and K.W. Colyard
Twitter Was Saying The Same Thing About Sam Ryder’s Surprising Eurovision Result
By El Hunt
What Is Barack Obama’s Net Worth? He Makes *Way* More Now As An Ex-President
By Hugh McIntyre
President Zelensky Spoke Out On Ukraine's Chances Of Hosting Eurovision Next Year
By Sam Ramsden
Get Even More From Bustle — Sign Up For The Newsletter