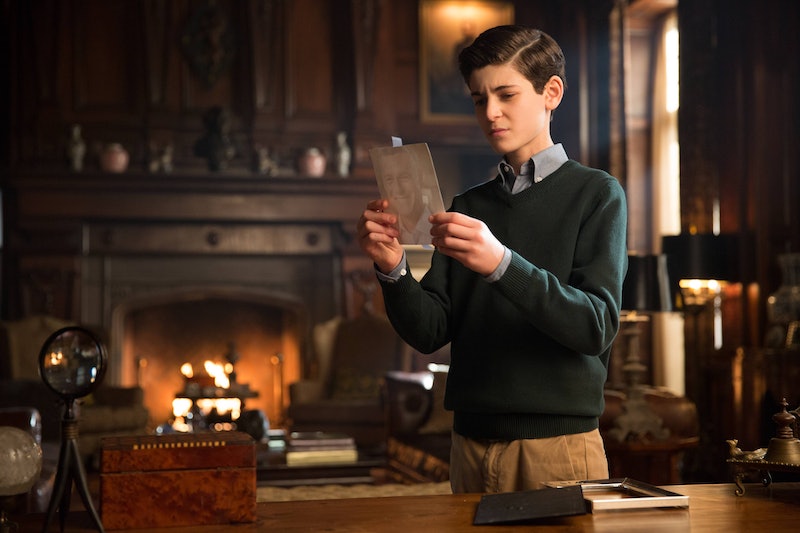 Bruce Wayne, the billionaire baby, has always been written as the originator of the Batman mantle. But Gotham might be changing all that, after the latest episode of Gotham seemed to suggest that Bruce Wayne's father was becoming Batman before he was mysteriously killed. In the trailers for the season finale (like the one below), it seems like the big "secret" all the characters were talking about is that the secret passageways leading to what will become Bruce Wayne's Batcave are already installed in Wayne Manor. It's even activated by the simple press of a button.

I don't know how much I support this decision from a creative standpoint. The whole idea of Bruce Wayne is that he decided that his city couldn't be fixed through the normal means his parents tried with philanthropy and public works, and thus left his mansion to help people on the streets. But if it just becomes what he inherits from his father, then it doesn't really have as much significance. I hope, as a fan of the show's often goofy tone, that instead of showing that Thomas Wayne was attempting to build a secret identity as Batman, he was simply using a secret passageway in the mansion to do something else, like belong to a secret society or train to become a ninja. But then again, those secret passageways and everything only sound like "Batman" after 75 years of knowing the character.

I also wish that Martha Wayne, Bruce Wayne's mother, was somehow involved, because I hate the idea that being a superhero is passed down from father to son, and it might be more interesting if both Wayne parents were working together on some kind of super-secret project. I'm hoping that the Gotham writers are better than that and manage to surprise the audience even though they've been dropping hints rather hard that Thomas Wayne = Batman Senior.

After watching Bruce's confrontation with Sid Bunderslaw, something didn't really add up. If Thomas Wayne was really the go-along corporate drone that Bunderslaw claims he was, then why would Bunderslaw potentially have hired someone to kill him? And then once he was dead, why send another hitman after his son, if, again, all Bunderslaw wanted was someone to be as disengaged and boring as Thomas was? But if Thomas was working on becoming Batman and Bunderslaw found out, then he did a really bad job of keeping it a secret, because the real Bruce Wayne is able to actively run his company without anyone finding out about his secret identity.

Of course, Lucius Fox was there to assure Bruce (and the audience) that there was more to the story. And in the most recent Batman adaptation, Lucius Fox is the man who supplies Bruce Wayne with the tech he needs to become Batman, so that functions as another hint that Thomas Wayne might wind up working on becoming Gotham's first superhero. It seems like the evidence is mounting — Thomas Wayne had something going on, but it's still unclear what exactly his secret identity will really be.