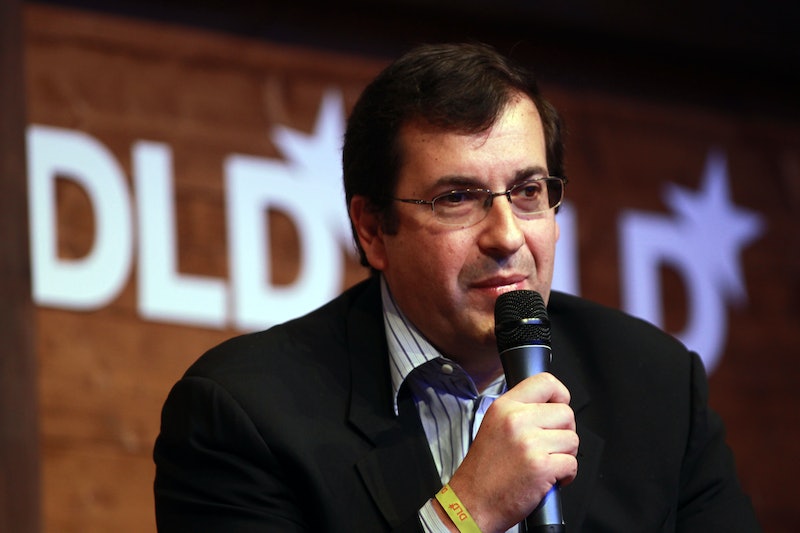 Dave Goldberg, SurveyMonkey CEO, died suddenly Friday night, according to a Facebook status released by his brother, Robert, on Saturday. Goldberg, who was Facebook COO Sheryl Sandberg's husband, was known for being one half of one of Silicon Valley's most powerful couples, for his witty, laidback personality, and for being a overall great human. For example, he was a "lifetime advocate for women," according to The New York Times, and his rise to success was anything but easy. Goldberg had a lifetime of admirable moments, and the humility and humor with which he met them only deepen the loss felt by his loved ones.

Goldberg graduated from Harvard with a degree in history and government and planned to go on a two-year hiatus before starting law school, according to an unedited interview with Business Insider. But he changed his mind two weeks before starting school: "I came to the realization that I didn’t really want to be a lawyer," he told Business Insider. "Sometimes the things you decide not to do are actually the biggest things to do in your career."

From encouraging his wife and other women to demand more from their employers, to maxing out his credit cards to start a new company, here are four of Goldberg's greatest moments.

He Advocated For Workplace Equality For Women

According to the Times and Sandberg's book Lean In, Goldberg's parents read The Feminine Mystique together, and Goldberg's father actually introduced it to his wife. When Goldberg was in high school, he chastised his prom date, Jill Chessen, for being too quiet in a politics class. “You need to speak up,” Chessen recalled Goldberg saying in an interview with the Times. “They need to hear your voice.”

Separately, when Goldberg worked at his digital music company, Launch, he treated employee and new mother Karin Gilford with a sense of understanding that she was doing two jobs at once. According to the Times, Gilford said Goldberg continued to give her challenging work, but that he also allowed her to work from home one day per week.

Finally, six out of 16 members of SurveyMonkey's management team are female, which is an abnormally — and fabulously — high ratio for companies in Silicon Valley that are valued at or over $1 billion, according to the Times.

He Took Risks In His Career

In his interview with Business Insider, Goldberg said he decided he "had to start something," after working at Capitol Records and realizing that there were a lot of problems with how record companies were run. He said that there was a lot of music being created that no one was hearing, so he wanted to start something that helped people discover new music.

Then, like true entrepreneur badasses, he and his best friend from high school maxed out all of their credit cards and asked friends and family for money to start Launch Media. They raised $100,000 at a $1 million valuation, and started an Internet-based company in the early 1990s. Eventually, the company went public, was worth about $300 million at its height in 2000, and was then bought by Yahoo!. How many people can say "Yeah, I spent all my money, and the result was worth $300 million at one point"? Very few.

Goldberg understood that his career and his wife's career were of equal importance and that one of them shouldn't have to make more compromises than the other. According to the Times, Goldberg didn't just support his female employees and friends, but he had the same respect for his wife within their home. Goldberg apparently pushed her to demand high compensation and even changed his schedule so that he could be home with their children whenever she traveled for work.

In a separate interview for Business Insider, Goldberg said that he and his wife aspired to keep their relationship 50/50 in terms of housework, but that he would admit he probably wasn't keeping up his half. Kara Swisher of Re/code said Sandberg and Goldberg "rode together in the front seat in a way that was unusual and lovely" and that Goldberg never considered himself as taking a backseat to his wife and her accomplishments:

Today, I have a vivid picture of Dave sitting in his kitchen working with both on homework before one of Sheryl’s events for women of Silicon Valley. Let it be said, I am not the most patient of homework-helpers for my two sons; in contrast, Dave was calm and helpful to them and yet not even slightly pushy as so many parents in the pressure-cooker world of Silicon Valley can be.

Well before Spotify, iTunes, or Pandora, Goldberg's Launch Media reinvented the way we could find new music. His idea used the Internet to find music before the Internet was even in its prime. Goldberg later introduced Launch-inspired Yahoo! Music Unlimited, which was the first on-demand, subscription-based music service on the web, according to a Yahoo! tribute written by Dave DiMartino, the former executive director of Launch Music:

LAUNCHcast was staggeringly good, in its prime massively better than today’s also-ran Pandora, and likely the best personalized radio service anyone has yet to experience. Music on demand? Well before Spotify was making headlines, when iTunes was just getting started, Goldberg introduced Yahoo Music Unlimited — and, as pioneers do, suffered the wrath of those gatekeepers at record labels and publishing companies who saw their business models threatened.

Former Yahoo executive and interim CEO Ross Levinsohn summarized all of Goldberg's greatest traits in a few words on Facebook, according to Business Insider:

Serious. Funny. Mensch. Prankster. Brilliant. Humble. Selfless. Ruthless (only at the poker table). Giving. Caring. Husband. Father. A Fine Man. The world is a bit darker today. And heaven got a bit brighter.