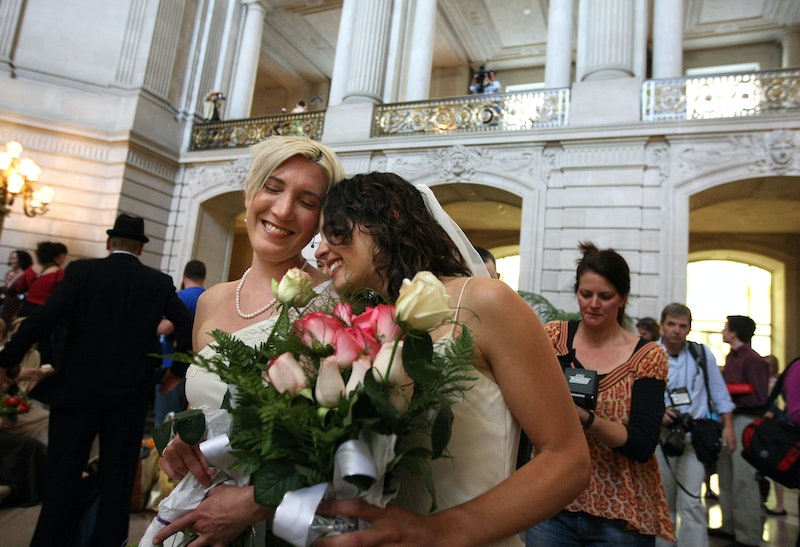 Hey girl, did you just get engaged? Holla! No seriously that's amazing news. Think of all the fun you'll have arguing over what kind of napkins you should get or whether or not you should invite your perverted step-brother. It's going out to be awesome! What? No, you don't think so? Well, turns out you're not alone. Increasing numbers of couples are eschewing the traditional vows with all the assorted hoopla and getting married at city hall.

Perhaps you're not interested in shelling out the kind of money that could rival the GDP of a small nation. Perhaps the idea of planning activities for relatives you haven't seen since you pooped your diaper makes your hair fall out from stress. Or maybe you hate the idea of planning a wedding. Or perhaps you just really don't give an eff. Don't worry. There is a solution. And it's called city hall.

There's a certain romanticism about getting married at city hall. The focus on the couple (and not the hoopla), the lack of stress, and the quickie nature of it (you guys are soooo in love you had to get married now!) just make it all so magical and mystical. Plus, it worked out great for Carrie and Mr. Big. Here are some tips to make your city hall wedding kick ass (and go a lot smoother).

Punch up your dress

First things first, the dress. If you don't have a floor length dress, add a pretty shoe clips to a pair of your heels to make them more glam. Wear a veil or a fascinator. Ta da! That dress you wore to last year’s office Christmas party is suddenly transformed. You basically went from Cinderella pre-ball to Cinderella post-fairy godmother/talking mice.

Now that we’ve gotten the fun stuff out of the way, let’s get down to the nitty gritty. Each city has it’s own regulations when it comes to marriage licenses. Many often stipulating that you have to get it before the wedding. So don’t stress yourself. Make sure you apply for one of those puppies before you say your “I do’s”.

You may be saving money on just about everything else, but the flowers are the place to splurge like Paris Hilton on a shopping spree. OK not quite. Still, please don’t get yourself deli flowers. Get some nice ass flowers. You’re a bride for god’s sake.

While the obvious choice may be to get married on a Friday so you have the whole weekend after as a honeymoon (and because it’s easier to get guests to come) you’ll likely be in line for a while. If that’s OK with you, cool. If not then, try another day.

That’s the whole point of having a city hall wedding, no? Keep your invited guests to a minimum. There likely won’t be a lot of space. Plus there most likely will be a ton of other people there getting married as well. Keep it small and sweet.