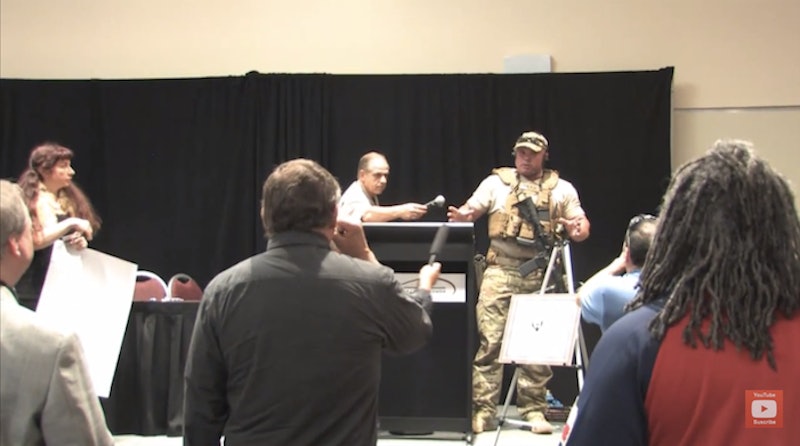 As a controversial art event in Garland, Texas, was coming to a close Sunday, two gunmen opened fire outside and shot a private security guard, according to police. Authorities said the gunmen were shot and killed, and their identities are still unknown. The security guard was shot in the ankle, taken to a local hospital, and then released, according to The New York Times. Streaming video from inside the Muhammad cartoon contest showed the moment when the event went on lockdown.

The event was live-streaming panels and interviews when a man wearing camouflaged garb and a rifle slung across his chest took the podium and announced everyone would soon be evacuated because a shooting had just taken place outside.

(inaudible) A police officer's been shot. Two suspects have been shot. Possibly have explosives on them, okay. That's what we're worried about right now. We are going to move you all into the auditorium here in just a minute. I just need everybody to remain calm, become orderly, and we're going to take you into the auditorium a little further away from the front of this building, all right?

Someone from the crowd then shouted, "Were the suspects Muslim?" to which the man replied, "I have no idea right now." The crowd erupted into applause and cheers. Moments later, the room was cleared. (The announcement comes at 1:29:35.)

The controversial contest, which critics deemed as anti-Islamic, was sponsored by the American Freedom Defense Initiative; the organization is considered a hate group by the civil rights nonprofit Southern Poverty Law Center. Sunday's event offered a $10,000 cash prize for the best cartoon of the Muslim prophet Muhammad. Muslims generally consider depictions and portrayals of the revered religious figure as insulting to their faith. Authorities have yet to disclose the motive behind the shooting.

Local reporters were already inside when the shooting took place given the debate leading up to the event. Bob Price of conservative news site Breitbart posted a photo of attendees on lockdown. The photo, which showed people holding an American flag with their right hands across their chests, was captioned, "While in lockdown, audience breaks into song and prayer. National Anthem an [sic] God Bless America."