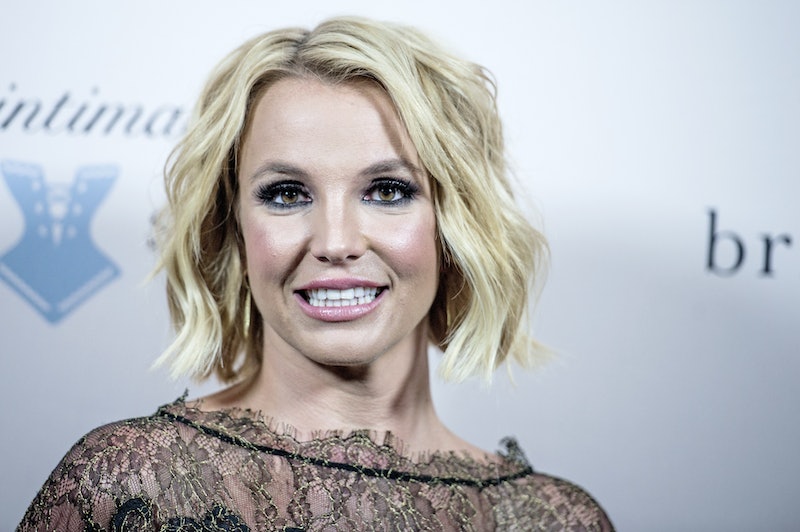 Britney Spears is gearing up for "Pretty Girls," her anticipated collabo with Iggy Azalea, but is she also changing her style? Is Brit Brit going goth, stomping around with big platform boots?! Nah, the "Baby One More Time" singer injured her ankle while performing in Las Vegas and now, Britney Spears is wearing an ankle boot to provide some stability and support to the injury. Hey, at least she's OK.

Brit made the bulky, black, and ultimately medical footwear look good, pairing it with her shapely legs, of course, and short shorts in a spring color while hanging out.

At first glance, I thought Brit, who is posing so playfully, was planning to spend a night wearing deep, matte, and red lipstick along with these vampy, platform boots that the kids usually wear at the coolest goth clubs. I can't even imagine her trying to bust some of her "Oops... I Did It Again" dance move in this kind of shoe.

Aren't you loving her swingy, shoulder-skimming lob, too? She looks so easy and breezy here, but she is a bit weighed down by that big old boot, that was made for walking, obviously.

Brit usually favors glossy lips and a bit of a fresh-faced makeup look as part of sexy style.

But here and there, she has exhibited some dark, unique looks over that could be best described as "semi-gothic" or, at the very least, vampy and goth-inspired. She doesn't always do black, but when she does, it's a win!

She is super cute, even with her massive boot.

But here are three other times Brit exhibited some elements of a darker side.

Brit's chocolate brown hair, which she debuted in early 2014, had a red cast. Ditching blonde for a darker hue made her seem more mysterious.

This is a rare shot of Brit with both dark hair and dark lips. She has had more than a few pit stops at brown, but she rarely, if ever, wears dark lipstick, sticking with pink, nude, and usually glossy. Pairing these two elements was Brit being more vampy than usual.

Brit's sheer, black dress and fishnets, again paired with dark hair, also had a vamp goddess vibe. When Brit darkens her locks, she gets a bit more adventurous with her style! She didn't ditch the perma-tan to go with pale, porcelain finish, though. That would've made her way more goth-inspired.

And you thought she was a golden blonde pop tart in latex, didn't you? Brit is way more open with her style than you might have realized, and it all became obvious because she hurt her ankle and had to wear a recuperative boot.