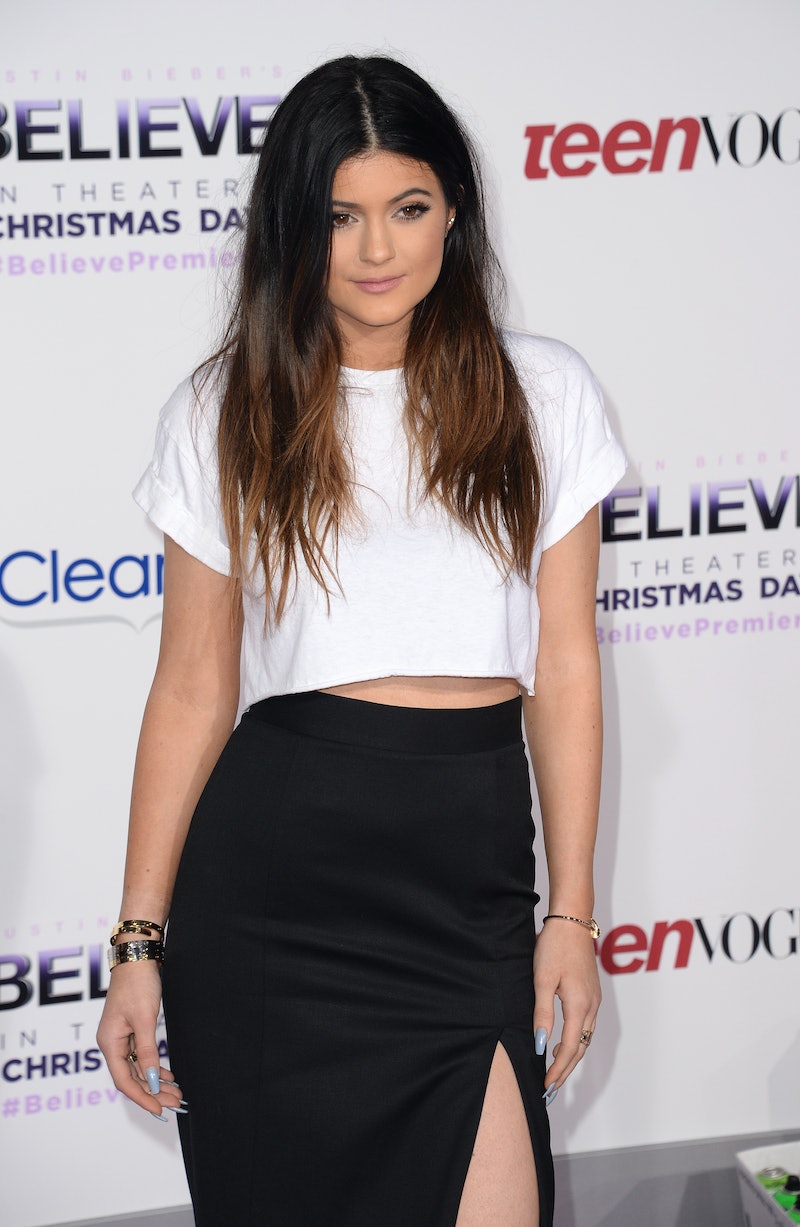 Teenager Kylie Jenner is allegedly buying her very own house, a privilege generally reserved for responsible adults. Responsible adults, however, ideally don't make a habit of using their phones while driving. But this didn't stop Kylie Jenner from, apparently, Instagramming while driving the other day, because she's a teen who holds all of the applicable adolescent myths of invincibility. If she's planning to convincingly masquerade as a grown-up, she's should probably grow out of this habit/never have done it in the first place.

On Sunday, Jenner posted a point-of-view shot of herself driving on an Los Angeles freeway, embellished with some diamond-festooned WordArt that read "Calabasas." Jenner captioned the photo "Born & raised..& I'll probably die here." Taking the picture while driving is bad enough, but I'm crossing my fingers that she wan't editing it while on the road. This makes every fiber of my inner backseat driver quiver with anxiety

It's worth noting that Jenner's traffic record isn't exactly stellar. She's reportedly been involved in car accidents in the past, and has been allegedly caught texting while driving. Yet, she's still flagrantly violating the rule about keeping your hands at 10 and 2.

Maybe it's the mom in me (or the part of me that doesn't want anyone to die), but if I were there, I'd be hovering over the wheel like nobody's business. Let me repeat: this person is about to own a house. She's got some growing up to do, and fast. Here are just a few things that Kylizzle should probably grow out of before stepping into the grown-up duty of homeowner.

Impromptu Photo Shoots In The Middle Of Streets

It's one thing to play on the streets in your neighborhood as a kid, but back roads are generally places that one should avoid playtime in — especially when you're wearing shoes that aren't conducive to clearing the area quickly.

Not Putting A Napkin On Her Lap

Girl, you wanna ruin your nice white ensemble with buffalo sauce? Put down a napkin, for Pete's sake!

Well, hopefully she keeps a little edge, but I'm sure that paying real person bills will help her understand Mom and Dad's plight a bit better.

Taking ANY AND ALL CAR SELFIES/Videos/Etc.

In order to redeem your official "I'm an adult" card, it should be a prerequisite that one stops taking pictures while driving.

Even if your co-pilot is taking a selfie that you can just BARELY resist sneaking into, keep your eyes on the road.

Also, can we just talk about what's happening in the above video? I think she's moving, and she appears to be in the driver's seat, but there is literally NO attention being paid to the steering wheel. Kylie, please straighten up, fly right, and drive safely.