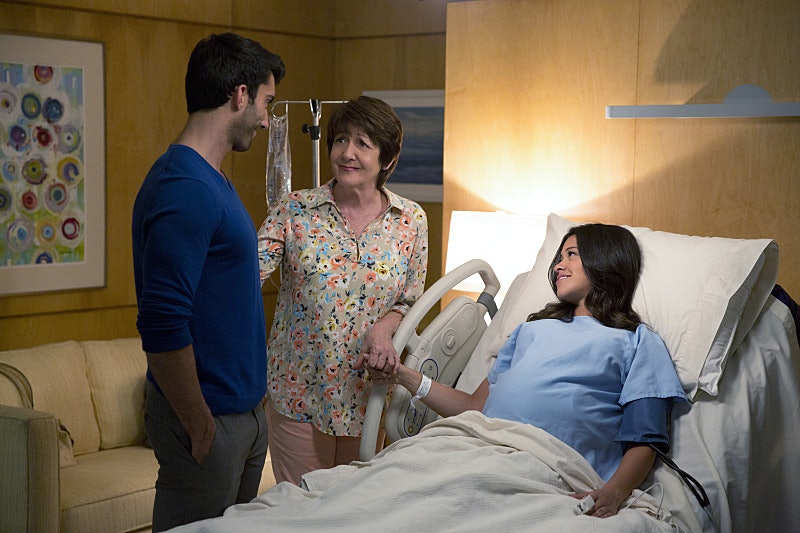 With Jane about to give birth during the season finale of Jane the Virgin on Monday, May 11, I can't help but wonder: what is Jane's baby going to be like? With the biological parents of Jane and Rafael, this kid is going to have some seriously good genes. While Rafael said that he wants their baby to be more like Jane in a message he wrote for the baby shower, homeboy shouldn't be too hard on himself since he has good qualities too. (Although, I do agree with his sentiment of "the more Jane, the better.")

Actress Gina Rodriguez (and Jane) may want her baby to be girl, but Jane and Rafael still don't know the gender of the baby* (despite Jane constantly referring to it as "she"). But I can guess what the baby will be like based on its parents' personalities. Of course, that is a slippery slope since people don't always turn out to have a perfect mix of the characteristics that their biological parents have. Take Jane for instance. She is the daughter of Xiomara and Rogelio, but she's much more down to earth than both of them. I know Jane's baby with Rafael will not be an exact combination of the two of them, but it's fun to guess... and genetics do play a part. Plus, this is a TV show! So I'm going to reserve the right to assume away. Here are nine characteristics that Jane and Rafael's baby should have based on their personalities.

*Since the show has not revealed the gender of the baby, I gotta call the baby "it" for the rest of this article.

Whether or not Jane raises the baby on her own, with Rafael, or with Michael (hey — if they get back together, it could happen), her baby will have a strong sense of family like she does. (And a strong love of grilled cheese too.) One can only hope that, like Jane, the baby will grow up admiring the strong women in its life.

Rafael was not always the responsible businessman he is today. Before he was diagnosed with cancer, he was something of a playboy and partier. While I don't want Jane and Rafael's grown-up child to be irresponsible, a little rebellion and getting your party on while you're young can be a good thing. Especially with a mom as Type A as Jane is.

Their Baby Will Be Intelligent — Emotionally & Academically

While Jane the Virgin fans know for a fact that Jane is very book smart, she also is in touch with people's emotions. While Rafael may not always be as good about regarding people's emotions as Jane, he is a very caring man and makes thoughtful decisions about the state of the Marbella. If they can pass those traits onto their baby, it will grow up to be a kind and smart person. (Plus, its Aunt Luisa apparently has an IQ of 152.)

It Will Have A Temper

Although I obviously adore Jane, she's no saint and the women of the Villanueva family are known to get real angry, real fast (exhibit A: Xo). And Rafael has also been shown to react emotionally and quickly (exhibit B: when he popped off at Jane). So I'm pretty sure this baby is going to have an angry streak... which will be fine as long as Jane and Rafael can teach the little one to control it.

The Baby Will Grow Up To Stand Up For Itself

Both Jane and Rafael do not really hold back when they think a wrong is being committed (Jane more so than Rafael in this case). They are both independent people with a sense of justice. They make tough calls and decisions — and also follow their guts. Rafael divorced Petra and Jane ended things with Michael, which were both the right decisions at the time since Petra and Michael had been lying to them. With parents like Jane and Rafael, the baby will grow up with a strong sense of self.

OK, just kidding. Imagining a baby with abs just completely creeped me out, but maybe the baby will have Rafael's motivation to go to the gym.

And Have Great Style

The baby's grandfather, Rogelio, considers himself to be a tastemaker. Although his style may not be for everyone (I get that not everyone wants a portrait of themselves alongside a leopard in their home), the baby's father, Rafael, has a great aesthetic too. Not only in the clothes he wears, but in how the Marbella is presented. Jane also has an adorable fashion sense, but Rafael will be more responsible for the child's taste for high-end style.

It Will Be Creative

Although Jane is often seen more as a thinker, her true passion is writing. She daydreams romance-filled scenarios and puts them into words on paper. She may not want her child to read her sexy stories, but she'll hopefully pass on that gene of being inspired to express how she/he sees the world through her/his own eyes.

Both of the baby's parents are charismatic and lovable. People are drawn to them because of their looks, personalities, and abilities. Just think about how badly fans want to meet his little guy or gal before its even born. You just know this kid is going to have pizzazz coming out of the womb.

Jane: Take comfort in the fact that you're about to become the mother of one amazing person.