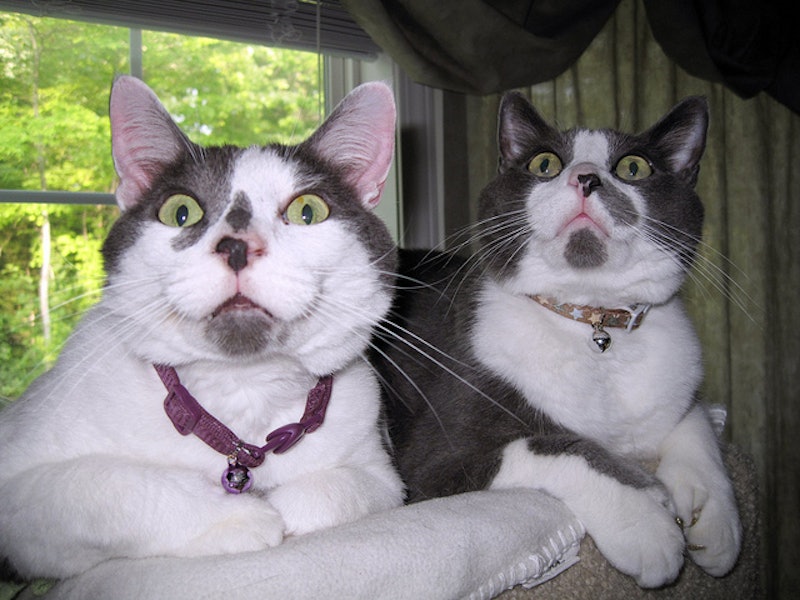 Kittens, I'm convinced, exist for pure comedic reasons (also because I guess they're the baby version of cats and those must exist, for obvious biological reasons, but whatever). For example, the series itself isn't exactly renowned for its laugh track, but Game Of Thrones with kittens is the definition of hilarious—not to mention leaps and bounds more adorable than the original pseudo-medieval murderfest. This concerned kitten born with worried eyebrows further validates and even elevates the fact that baby cats are simultaneously hilarious and precious.

He looks so confused! He goes by Gary (or Concerned Kitten, if you're feisty) and really? He just wants to make sure everyone and everything is going smoothly—which is to say, he has far better intentions than Grumpy Cat. UK man and Gary's human, Andy Entwistle, says Gary was born with the two black swipes above his sweet peridot eyes. As Gary grew, the swipes spread across his kitten forehead to more effectively resemble worried eyebrows. Although now colloquially known as Concerned Kitten, Entwistle explained he named his cat after British pop group Take That's member Gary Barlow. Apparently, when the singer sails towards particularly high notes, Barlow's eyebrows raise along with his octaves. "There's definitely a resemblance," Caroline Entwistle, Andy's wife, explains.

See Gary in all his fresh-to-the-world-yet-still-slightly-stressed-about-it glory:

HE IS DARLING. It's weird to feel such a strong urge to comfort or otherwise placate a kitten you don't know personally. Yet here we are.

Gary is on perpetual HIGH ALERT. And I get it. Who knows what those sneakers smell like? Poor guy. Here are some more pictures of his extremely anxious adventures:

"Human, do not forget your sunscreen!"

"What if The Mindy Project isn't renewed?"

"Are the walls shrinking...or am I becoming giant?"

Round of applause for this derpy adorable creature.

Animals, like humans, are occasionally born with strange markings outside their own realm of control. Anyone else remember when kitler, cats with markings like Hitler's mustache, were all the Internet rage?

What about cats with other (less offensive) mustache markings?

And finally, we have:

It seems like the patterns are endless! Even though I love my kitten to the moon and back, seeing all these photos lined up makes me resent his pattern-less existence a little. The Internet reveals cat hair dye is real and can be safe, but I'm not there yet. Not sure if I ever will be. In the interim, I invite you to join me in delighting in these charming cat markings.

More like this
Meet The Disney Imagineer Bringing 'Guardians Of The Galaxy' To Epcot
By Charlie Mock
My Picky Eater Dog Absolutely Devours This All-Natural Food
By Allison Berry
If You Have Pets, You Probably Don't Realize You're Making These Common Mistakes
By Mackenzie Edwards
25 Cheap Ways To Make Your Cat 5x Happier
By Claire Epting
Get Even More From Bustle — Sign Up For The Newsletter